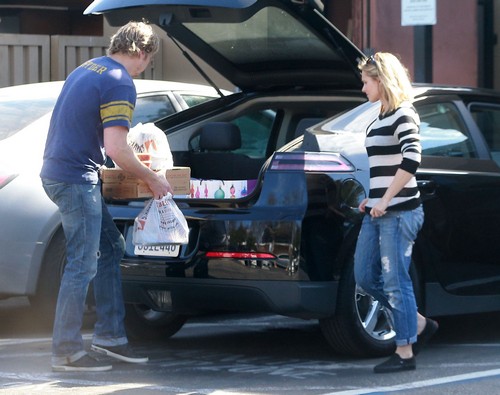 Celebrities are some of the biggest hypocrites on the planet, and none bigger than celebrity parents. Here they are, whining about their children’s photos being posted on blogs, and yet at the same time, they’re giving interviews and ‘exclusives’ to magazines and news outlets that post these very same baby photos.

Take, for example, Kristen Bell‘s and Dax Shepard‘s latest vendetta against magazines that post pictures of celebrity children. Dax decided to write an op-ed in Huffington Post, which Lainey Gossip points out actually has its very own celebrity baby section – where celebrity children’s pictures are posted on a regular basis.

Dax’s reasons for writing this essay are not self-serving by any means [unlike other celebrities I can mention], but these people that keep talking about privacy never seem to understand that it works both ways. First of all, both Kristen and Dax have a Twitter, and when they feel like, they post very personal information AND photos on there. Now, maybe they don’t famewhore their children for their own gains, but the problem is, if a change happens, it will happen to be a system-wide change.

And even if they personally don’t use their children to keep themselves relevant, other celebrities do. So they can call for a boycott all they want, but the sad truth of the matter is – most celebrities, especially ones who are barely relevant right now – use these magazines to keep themselves relevant. They set up family photo-ops whenever they need to promote something, and they sell photos whenever they need a boost of publicity.

See, Dax and Kristen don’t realize that it has to work both ways. They can’t call for a ban of magazines, especially when the people that buy those magazines are the ones that keep them employed. It’s a cycle – paparazzi only take pictures because the magazines’ demand is there, and the magazines demand is there only because the fans want them. And the fans want them because they’re used to seeing these celebrities in the media, on Twitter and on their TV, etc. So if you truly want publicity, go become a hermit somewhere, get off Twitter, and whenever you don’t have a job to promote something, don’t be all up in everyone’s faces on social media. Then complain about privacy and your children’s privacy, and people will take you seriously.