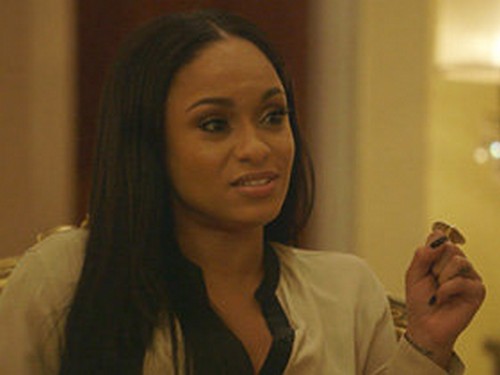 Tonight on VH1 LOVE & HIP HOP continues with a brand new episode called, “Red Alert.”  On tonight’s show a territorial battle ensues between Erica Mena and a new rival.  Did you watch last week’s show?  We did and we recapped it here for you.

On last week’s show Joe and Tahiry’s destiny continued to intertwine. K.Michelle pushed Peter to reconcile with Amina as Tara took steps to move on. Saigon made a brash move and Erica Mena’s love triangle exploded.

On tonight’s show Tahiry and Rashidah clash while Erica Mena and a new rival fight for territory. Joe decides to stake his claim as Tara and K. Michelle take the plunge on a double date. Rich finally admits his love.

In tonight’s episode, Tara and K. Michelle want to move on and get back into the dating world. Tara was the first to do so by arranging a date with the actor she had met through Yandy’s new movie. She, Yandy, and K Michelle were goofing off and trying out wigs when she told them her happy news. On top of that the handsome she’s interested n has an identical twin brother. Tara hooks K Michelle up with a double date. Each of them gets their own six packed twin.

Tahiry went to Rashida’s party for her wedding. She said she had felt bad that had been ignoring her friend. If she really felt that way then she wouldn’t have unloaded all of her drama with Joe on Rashida. Her friend listen and then tried to point out to Tahiry that she wasn’t in the position to judge Joe anymore seeing as they aren’t together. She specifically didn’t think it was Tahiry’s place to be mad about what type of photos Joe wanted to post. Tahiry got upset and then she got into an argument with her friend. She ended up storming out with Rashida telling her she’s kicked out of the wedding.

Rich is still going through another one of Erica’s episodes. He needed advice and the best place to go for it was to his mom’s. He told her how he had gotten into a fight with Erica’s girlfriend and now Erica is mad at him. He could just drop Erica although she did help him create a lot of new contacts. He had wanted to help her out by finishing up her album when she started all the drama. His mom told him he had to make a choice. Either produce her album or let her go. The problems always crop up because Rich gets messy. He never keeps things strictly professional.

Tara and K Michelle did enjoy their date. Even though it wasn’t what they were expecting. Seeing as Tara and the twins are all actors they wanted to do an exercise. K Michelle didn’t know about until after she arrived at the gym. The exercise is them practicing how to fall. At first it was a small fall and then they had to drop 20 feet. K Michelle wasn’t going to be doing that. What saved the date for her was that her twin took his top off.

Rich swears he’s going to try and turn over a new leaf and yet he signed on a former fling. He originally thought he was going to set up Erica for the promising photo-shoot. After she started to pull her old stunts though he decided to give the opportunity to Jessica instead. Jessica is an attractive (like Erica) and young (again like Erica) woman. And as an added bonus, Jessica is interested in more than a professional relationship with Rich.

Rich doesn’t want to mess around with her in case he gets another Erica and who better to remind him how much trouble the star caused him than Peter. The two men wanted to make amends and so they met up for drinks. Peter apologized for going off on Erica. He said as the adult he should have walked away and left Erica to her childish antics. Somehow this still counts as an apology and Rich was willing to accept it. He had missed his friend. Rich is throwing an event and he wanted Peter to attend. He did warn him though that Tara and most likely Erica would also be there. Peter was hesitant about going until Rich told him he all he had to do was stick to the DJ booth.

Tara arrived at Rich’s event with her new man. Yandy warned her when she came in about Peter also being at the party. Tara saw him and then made sure to keep her distance.

The drama didn’t come from her. It came from Erica. Erica wasn’t invited to the party because Rich didn’t want her to start anything with Jessica. Erica heard about the party from Instagram and chose to crash. The first thing she saw when she walked in was Rich with Jessica. She went over and got slightly catty and then wisely walked away. It was Rich that followed her to the bar. He was the one that wanted to talk and he even had the nerve to ask her for a kiss. Jessica followed him trying to stake her claim. Erica began laughing at her and the two started trading insults.

To be fair it was Erica that threw the drink that started the fight. Rich and couple of guys had to pull the women apart. Erica left, but not before she told Rich he either had to love her or let her go. Basically what his mother had told him earlier.

Rich and Yandy are starting a business venture only Yandy has some concerns. She’s worried about Erica starting more episodes like she did at the party. Rich said he found a way to fix that. He was going to offer Erica a monogamous relationship. He realized he deeply cared for her and with a relationship maybe he could keep her crazy under control. What he hadn’t expected was for Erica to turn him down. After years of wanting him to be able to commit; she’s ready to move on. Last night helped her to move on. They agreed to continue on professional and that’s it. Anything else it just too late.

Once Joe figured out he wanted to marry Tahiry, he went to her sister Lexie for help. Lexie didn’t want to offer any assistance until she got Joe to promise things will be different. When he convinced her then she helped him pick out a ring. He thought all he had to do was show the ring off to Tahiry and she would say yes. Lexie snapped him out of that. She told him to go all romantic. She set up Tahiry to go to meet her in Times Square where she saw on the mega-screen the beginning of Joe’s proposal. He saved the actual question until he was right in front of her.

Will she say yes or has he had hurt too many times?