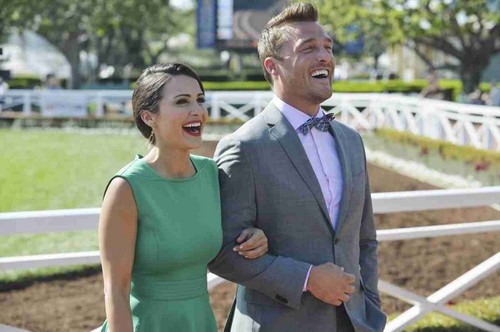 The Bachelor 2015 spoilers tell us that Chris Soules might have been rejected on The Bachelorette 2014, but he’s about to find another chance at love on The Bachelor 2015. Well, he’s about to find another chance at ‘love’, because we all know how realistic these reality shows are. In the battle for Chris Soules’ heart, thirty women will cry tears of betrayal and backstabbing, but mostly of their lost chances at becoming reality stars. Chris, on the other hand, is already enjoying the spotlight as the new Bachelor, and has already given several interviews discussing both his heartbreak from Andi Dorfman’s rejection and his newfound girlfriend.

When discussing Andi Dorfam, Chris explains, “Falling in love with Andi, I did know that there was a chance that it still wouldn’t work out.” Well, of course he did. And I’m sure that the chance at becoming The Bachelor this season was a great consolation prize, and helped him recover from Andi Dorfman’s rejection that much quicker. After all, he gets more money, more fame, and more attention this way, none of which was really granted to him in bulk form on The Bachelorette.

Chris also touches upon Juan Pablo Galavis, who was probably the most hated Bachelor this side of the decade. Juan was universally despised as being the epitome of a ‘douche’, and it’s obvious that Chris is doing everything in his power to appear the exact opposite. Home-grown farmer, popular, kind, friendly to animals and kids, and nice with the ladies… all fall into the anti-Juan Pablo Galavis camp.

Chris also confirms that he has met someone this season, (the season winner who is now his fiancee) and even though we all know who it’s going to be, Chris doesn’t say anything specific except for, “I’m extremely happy and excited about the person and I feel like their character is incredible and so I don’t really have any concerns about that.” Of course as CDL has revealed already in The Bachelor 2015 spoilers that we know the winner of the season, his fiancee, who is currently engaged to Chris Soules – click here for that major spoiler.