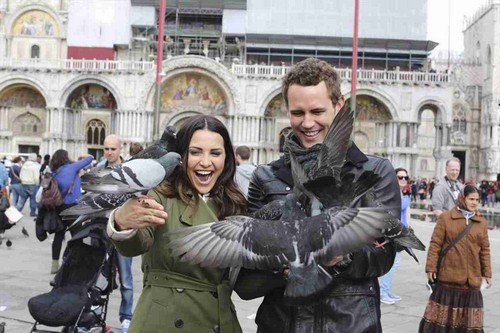 On July 28th the Bachelorette 2014 Season 10 finale is set to air on ABC, but you have most likely seen the spoilers smeared all over the tabloids and internet revealing that Andi Dorfman is currently engaged to Josh Murray and planning a TV wedding. Rumor has it Andi and Josh are already planning the next Bachelor Franchise wedding and the network has informed them there is no limit. According to Life & Style Magazine, the couple’s wedding budget has already surpassed a million dollars.

Ironically, Andi Dorfman and Josh Murray’s relationship is a hot mess. Andi was always skeptical of Josh Murray on The Bachelorette, and it showed, because he reminded her of her ex-boyfriend who cheated on her. And, perhaps she should have gone with her gut instinct. Apparently when Josh Murray signed on to The Bachelorette he was still chatting with his ex-girlfriend, Brittany McCord and has been rumored to be cheating on Andi with her now.

Don’t feel sorry for Andi Dorfman though. Josh may be cheating on her, but she is no angel. Fans were baffled when Bachelorette spoilers revealed Andi would choose Josh over Nick Viall, who was her obvious first choice throughout the entire season. Apparently Andi was just as confused as we are with her decision, because several sources are claiming that Andi is now second-guessing her decision and talking to Nick behind Josh’s back. Nick wants another chance, and Andi is thinking of giving him one.

So, with all that said, why in the hell are Andi and Josh really planning a million dollar wedding? For two obvious reasons, the money and the fame. Why else would two people go through with a wedding when multiple sources are reporting neither of them are being faithful to each other?