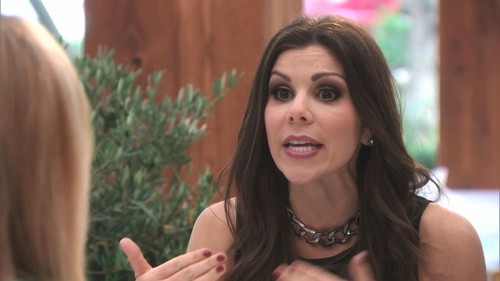 The Real Housewives of Orange County returns to Bravo tonight. On tonight’s episode called, “Not a Good Day LA”, Tamra reveals her real reason for being upset with Heather.

On the last episode Shannon was excited about her annual Christmas party, but holiday cheer quickly turned into holiday jeer when the ladies got together. Meanwhile, Vicki mourned Briana’s move to Oklahoma and Tamra got a dose of reality when she got some shocking news about her son. Did you watch last week’s episode?  If you missed it we have a full and detailed recap, right here for you.

On tonight’s episode Tamra reveals her real reason for being upset with Heather. Meanwhile, Briana and Ryan surprise Vicki with the gender of their baby and later, Shannon turns to Tamra for support when her husband, David, sends her a shocking e-mail about their relationship.

The ladies are back from their vacations and the holiday break has apparently offered them time to reflect on what happened at the Christmas party. Vicki hadn’t agreed with the way Tamra handled things with Heather and instead of just dropping that comment out there she’s actually backing it up with actions. She went to lunch with Heather and apologized for the dinner.

Vicki has said things about Heather behind her friend’s back and she’s even said so at the lunch, but she honestly likes her and sides with her in this argument with Tamra. Vicki has been on the other side of Tamra’s harsh words and she knows what it feels like.

Tamra sometimes gives off the impression that she picks an argument just to ruin a good friendship and now it’s up to Heather to figure out if her relationship with Tamra is worth saving. Tamra and Heather haven’t spoken since their fight. Neither of them wanted it to appear like they were the ones that had to apologize and that also meant they haven’t forgiven each other.

All of this this made for awkward morning TV. If you recall from last week, Heather had already arranged for Tamra to be a guest on the morning news with her prior to their fight. So there was no way either of them could have gotten out of it and this led to a cold atmosphere between them on set. And, sadly, everyone felt it during taping.

There weren’t any kind words towards each other during or after shooting and yet funnily enough both ladies wondered why the other didn’t reach out. But they decided to put whatever this still is behind them which is why they later agreed to lunch. Because everything can be fixed with an upscale lunch, right?

If you watch this show then you would think so. The ladies sat down and after getting on each nerves with throwing blame – Tamra finally said what was wrong. She was angry about Heather talking to Eddie about what she said to her in confidence. Eddie didn’t like it that Heather thought she could voice her opinion on them having a baby and it’s been festering with Tamra for months.

None of this was about the gym thing!

And once Heather said she was sorry then it was like the good old days again. They were back to talking and the one thing Tamra felt the need to bring up was Shannon. They both came clean to Shannon getting in the way of their friendship, but Tamra wanted to defend her new friend. She said Shannon is having it rough lately. The other woman’s marriage is falling apart and Tamra wanted to be there as a shoulder to cry on.

While Heather can sympathize, she doesn’t believe Shannon’s behavior can be that excusable.

Shannon and her husband are giving each other a break. Her husband wrote her an email after a very big fight that said he wanted to move out for a little bit. And Shannon had told Tamra about it when she was venting.

But somehow the contents of that email has gotten out. As in everyone is talking about it and David heard Heather was behind it. He told Shannon about the Heather connection and instantly it makes Shannon fear her new friend has betrayed her.

Could Tamra have told Heather all of this when they were getting back together? And how is this going to play out for Vicki? She’s mostly kept her head down what with Brianna moving and having another baby, but she’s friends with all the ladies involved in this mess. Can a new grandson that’s not even born yet really keep her away?