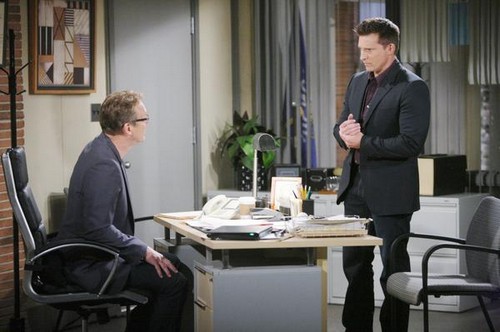 The Young and the Restless spoilers tease more evidence in Ian Ward’s case is piling up against Dylan McAvoy. According to CDL’s exclusive Y&R spoilers, on Tuesday September 16, Ian Ward’s jacket is found in the quarry behind the race track, and Paul thinks someone may have dragged his body there, and the jacket is covered in mud. All signs once again point to Dylan when Paul visits Avery to thank Dylan for the fishing lures he gave him, and notices that Dylan’s boots are covered in the same mud as Ian’s jacket.

Everything isn’t always what it seems on soap operas, and Y&R fans are speculating that Ian Ward may not be dead. But, The Young and the Restless spoilers reveal that a cryptic conversation between Stitch and Dylan will probably change those fans’ minds. On Tuesday September 15, Dylan’s rage once again takes over and he curses out a repair guy. Afterwards, he has a flashback of himself screaming at Ian. Dylan confides in Stitch and informs him he knows what it feels like to be so full of rage you want to kill someone.

The CDL Young and the Restless spoilers source for September 16 also reveal that Mariah will make a new frienemy when she runs in to Victor Newman at the park. The pair bonds over their mutual hate for Ian Ward and agree that they both admire each other’s less than stellar personality traits. Lauren corners Kevin about her problems in the bedroom with Michael, and Kevin insists that he is in the dark and has no idea what is going on with his older brother. According to Y&R spoilers, Michael finally caves and goes to see a doctor. He believes that he needs a prescription to help him and Lauren in bed, but rumors have been circulating that the character may have cancer.

So Y&R fans, what do you think about Ian’s disappearance? Do you think he is really dead and Dylan McAvoy killed him or is there more to the story? And, what about Michael and Lauren? Do you think Michael just needs some Viagra, or could the cancer rumors be true? Let us know what you think in the comments below and don’t forget to check CDL tomorrow for more The Young and the Restless spoilers.