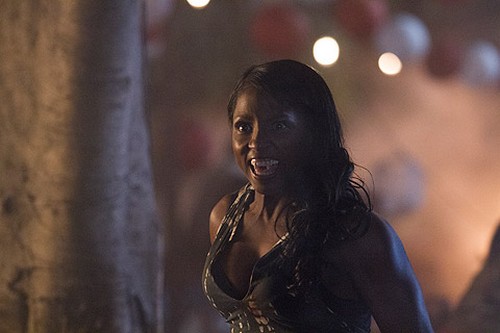 True Blood was back tonight and it was intense, jammed packed with tons of action as usual. Earlier tonight, we saw Pam try to convince Eric to fight for his life, we saw Sookie use herself as bait and we saw the death of a favorite and beloved character.  If you are like me and you are anxiously awaiting each episode, we have managed to get our hands on a sneak peek video and some spoilers to whet your appetite for next week’s episode 4 called “Death is Not the End.”  So sink your fangs in and enjoy!

On tonight’s episode,  Sookie came up with a risky plan and enlisted Bill to help.  With the help of Jessica Andy found his daughter and rescued her.  Meanwhile the people of Bon Temps got guns from the sheriff’s office and have decided they are going to take their town back.  Pam tried to convince Eric to fight for his life.  Not much worked until she mentioned that Jason let Sarah Newlin live.  In sad news one of our favorite characters was killed tonight.  And lot’s more happened — did you watch the episode?  If you missed it we have a full and detailed recap, right here for you.

Spoiler alert: If you’re one of those people who doesn’t like spoilers, stop reading now! We have some juicy spoilers for you about the season 7 episode 4 of HBO’s “True Blood.”

Official HBO synopsis of next week’s episode: “In the aftermath of yet another bloodbath, Sam (Sam Trammell), Sookie and Jason find themselves the bearers of bad news in Bon Temps and beyond. Pam recalls the events that led her and Eric to Shreveport and Fangtasia. Bill (Stephen Moyer) and Jessica (Deborah Ann Woll) get nourishment from unexpected sources. Following a new lead, Sookie enlists a band of vampires and humans to track down the H-Vamps.”

On next week’s episode written by Daniel Kenneth; directed by Gregg Fienberg Bill decides to help Sookie even though they are outnumbered.  Bill feels he owes Sookie everything.  Jessica is not healing after she was shot because she is not eating.  James finds her nourishment. The Hep-V vampires take Arlene to be fed on.

True Blood episode 4, “Death is Not the End” airs on HBO on July 13th, 2014.   Check out the preview video below of episode 3 below and let us know in the comments below what you think!  Are you enjoying season 7 of True Blood?  I am loving it and next week’s episode is going to be so intense! Make sure to check out the preview clip below!