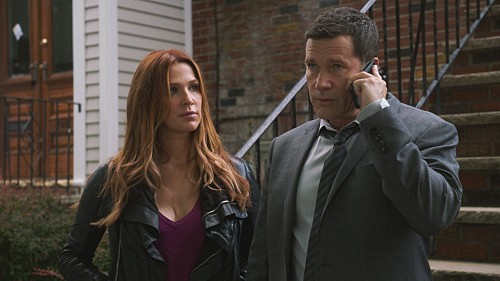 Tonight on CBS UNFORGETTABLE continues with a new episode called, “Manhunt.”  In it, Carrie and Al hunt for a recently paroled criminal who may be responsible for a defense attorney’s death and who may also be out to settle other scores.

On last week’s episode Carrie caught a deadly assassin who had eluded her before, but had to put her personal vendetta aside when it was revealed that the woman had vital information to prevent a terrorist attack on New York City.  Did you watch last week’s episode?  We did and we recapped it right here for you.

On tonight’s episode when a defense attorney is killed, Carrie(Poppy Montgomery) and Al (Dylan Walsh) hunt for a recently paroled criminal who may be looking to settle other scores.

Tonight’s episode 9 looks like it going to be great and you won’t want to miss it. So be sure to tune in for our live coverage of CBS’s Unforgettable episode 10 — tonight at 9 PM EST! While you wait for our recap let us know how much you are enjoying this season of Unforgettable?

Tonight’s episode of “Unforgettable” begins with a flashback of a woman riding her bike through Central Park after dark. She sees something and screams out loud and then the screen goes black.

Present – A man finishes giving a speech at the bar association and heads to his car in the parking garage. He realizes he isn’t alone and calls out “hello?”

Carrie and Al are with a real estate agent looking at a potential apartment for Al. He asked Carrie to come along with him because real estate brokers will take him more seriously if they think he is in a relationship.

Carrie and Al receive a phone call and head to the parking garage. Chris Jenkins, the lawyer that was giving a speech last night was shot to death. His watch and his wallet is missing, but they are certain that he wasn’t mugged. He was shot in the back, which means he trusted the shooter, and most likely knew them.

They head to Jenkin’s office and speak to his co-worker Lisa Martinez. She can’t imagine one of his clients would want to harm him, because he “gave his all to them.” Carrie thinks it is strange that Chris’s glasses case were lying on his desk since he was wearing them when he was murdered. They trace the glasses they found at the scene of the crime and realize they belong to one of the law students at Chris’s practice named Mark. Mark insists that he didn’t kill Chris Jenkins, but he found him in the parking garage dead. He dropped his glasses when he was taking a file out of Jenkin’s briefcase because he wanted to protect him. The file he took was a defamation lawsuit. A man named Simpkins was suing him because he got his daughter’s murder case thrown out. Simpkins has an alibi though-he was at an AA meeting.

Chris Jenkins’ received a phone call from a payphone the day of his death. They are able to get a photo from street cameras of the man on the payphone. They recognize him as Shawn Manning, the “Millenium Monster.” Shawn was charged in 2000 for raping a woman in Central Park. Chris Jenkins represented Shawn, but they lost the case and he spent 12 years in prison. Al and Carrie pay Shawn’s Aunt Rhonda a visit, and Rhonda says that Shawn was with her all night last night and he has no “ill will” against Chris.

As they are leaving Shawn’s Aunt’s house they find him hiding in the back yard. They chase him down an alley and out into the street. He jumps on the back of a garbage truck and rides away before they can catch him.

Carrie and Al head back to the office to regroup. They run Chris Jenkins’ credit cards and realize he bought lunch at Gino’s Pizzeria. And, they had seen a Gino’s menu in Shawn’s bedroom at Rhonda’s house. They head to the pizzeria and question the owner. He says that Shawn Manning came in once to eat lunch with Chris Jenkins. They check out the pizzeria’s phone records and realize that Shawn called the pizzeria six times from Rhonda’s house. And every time he called the pizzeria, someone at the pizzeria turned around and called the cell phone of a man named Robert Cordero. They trace Cordero’s name and find out that he is a convicted rapist.

Al questions Cordero and accuses him of raping the Doctor in 2000 in Central Park. He thinks that Shawn knows Cordero is the real rapist and is trying to clear his name. Cordero denies all allegations.

Shawn Manning pays the Doctor, Rupa that he is accused of raping in Central Park a visit. When she sees him waiting in her yard for him she turns around and runs and falls in the sidewalk. Shawn runs away and Carrie and the ambulance arrives at the scene. They don’t think Shawn had any intention of hurting her, thy think he visited her to see if she could help him clear his name.

District Attorney Frost pressures them to wrap the case up. He is concerned there is going to be pandemonium in NYC soon if they don’t catch the rapist and the killer.

Carrie and Al put their heads together and try to figure out how they can clear Shawn’s name and find Chris Jenkins’ killer. Carrie heads to Rupa’s office and tries to talk to her about the night that she was raped. He explains to Rupa that she thinks that Shawn is innocent. She shows her a picture of Cordero but Rupa says she doesn’t remember anything from that night. As Carrie is leaving Rupa says that all she remembers from the raping was a “clicking metal sound.” Carrie heads back to the station with pretty much nothing. Carrie is talking to Al about how she went jogging through the park at night before. She has an epiphany and remembers that when she went jogging at night she seen a cop on a horse policing the park and the horses hooves made a clicking sound.

Carrie and Al meet with the mounted officer that was first on the scene during the Central Park raping back in 2000. They show her a picture of Cordero and she claims that he was definitely in the park the night Rupa was murdered. They head to the restaurant to pick up Cordero but someone else got to him first, they find his body shot to death in the dumpster. Carrie recognizes valet ticket stubs right next to the dumpster, they are the same valet ticket stubs that Attorney Frost had on his car. She and Al put their head together with Elliot and realize that Gordon Frost closed the books on Manning’s rape case years ago without substantial evidence. Now that Manning is free and trying to clear his name, it is going to be exposed he didn’t follow due process on Rupa’s rape. So, he killed Cordero and Jenkins to keep it under wraps that he sent an innocent man to jail for 12 years.

Elliot holds a press conference and arrest DA Gordon Frost on live television, and reveals that they found the murder weapon in his car. Shawn Manning’s name is cleared and Rupa even offers him a job at her practice.