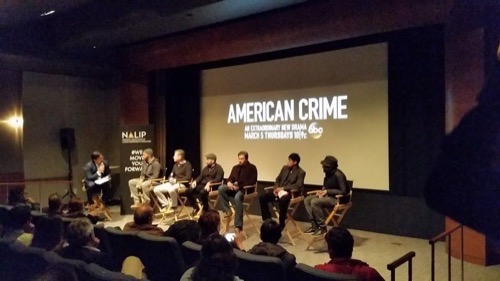 Tonight on ABC American Crime airs with an all new Thursday March 5, season 1 premiere episode called, “Episode One,” and we have your weekly recap below. On tonight’s episode, in the premiere of this new drama, a home invasion leaves a war veteran dead and his wife seriously injured.

In American Crime a home invasion leaves a war veteran dead and his wife seriously injured, but the ensuing investigation creates more questions than answers as a seemingly cut-and-dried case is anything but.

On tonight’s episode as per the ABC synopsis, “in the premiere of this drama, a home invasion leaves a war veteran dead and his wife seriously injured, but the ensuing investigation creates more questions than answers as a seemingly cut-and-dried case is anything but, a fact that the deceased man’s divorced parents come to realize when they arrive to bury their son.”

Russ Skokie and his ex-wife Barb Hanlon received a call that no parent ever wishes to get. On tonight’s premiere episode of “American Crime”, two seemingly average everyday people were informed their son Matt had been murdered. And although their daughter-in-law was lucky enough to survive the initial assault – it was also proven that Gwen had been sexually assaulted during the attack.

So for this family, there is no light on the other side of this. At least nothing they can see for themselves as of yet. And all they want is justice.

Getting justice however is a bit of a muddled process. A young man of Hispanic descent was seen leaving the scene of the crime but as often as many see in these cases he wasn’t acting alone. And its high likely that if caught he would turn on his “friends”. Said friends aren’t exactly scared of or have held off on threatening him if he snitches. So if he does go down for this then he’s not going to be taking anyone else with him.

So will that be justice? Matt’s mother probably won’t think so. Apparently she’s already antsy as it is seeing as the police haven’t told her anything. They merely mentioned some of their suspicions but that was about it. Meanwhile her son’s killers are living it up on his credit card.

You know the one that can easily be traced back to a convenience store and security cameras.

But then the police called and said they had a viable suspect. A kid of Hispanic descent was seen driving an unmarked car that matches the description from the attack. So as far as the cops thought – they had someone for this.

Particularly as their suspect lied to them and said no one had borrowed the car.

His father, a hard-working Mexican-American, owns a garage so while the teenager was thinking he didn’t want to get trouble with his father for driving a car he wasn’t supposed to – thus denying someone else had access – he inadvertently had put a target on his back. And his father doesn’t know how to help him. And Matt’s mother is making the situation worse by giving out interviews saying her war hero of a son was murdered by an illegal.

Tony did eventually give up some pivotal information such as who was renting the car from him. Because that is why he went behind his father’s back – money was involved. And if he’s telling the truth then it was upwards to fifty bucks each time Hector wanted to use the car for the night.

However, despite the fact his help led to the capture of the people that were actually there the night Matt and Gwen were attacked; the teenager was still charged with murder. Subsequently, no one believes his story when he said that he only gave the car out for the night. And so he’s been sent to a juvenile detention center while the case is being tried.

And as for the real culprits, Hector who was caught using Matt’s credit card was later taken into custody. Where, after healing from his gunshot wounds, he thereby gave up a name until ultimately the police believed they caught everyone that attacked the couple.

But, and here’s the tricky part, a defense is already in the works. Because, the golden couple that was Matt and Gwen weren’t as innocent as their families kept trying to make them out to be. At least not towards the end. While the couple might have once been the good honest people their parents remembered – it’s becoming more and more obvious that Matt (and possibly his wife) could have been dealing drugs.

Bags of meth were found at their home and they had been too carefully hidden and packaged to have been meant for only personal use.