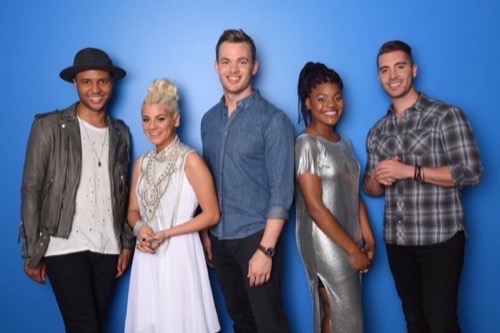 It’s another exciting night of American Idol on FOX tonight with an all new Wednesday April 29, season 14 Episode 26 called “Top 4 Perform” and we have your weekly recap below. On tonight’s episode, the Top 4 singers perform; one contestant is eliminated.

On the last episode, the votes were in! The Top Five performed live and one finalist went home. Did you watch the last episode? If you missed it, we have a full and detailed recap right here for you.

On tonight’s episode as per the FOX synopsis “The votes are in! Find out which finalists make it to the Top Four and which singer has to say goodbye.”  Tonight we will see the highlights of our contestant’s awesome trip to Nashville! One of the highlights? Being mentored by Martina McBride and Rascal Flatts’ Jay DeMarcus!

Tonight’s episode of American Idol kicks off with host Ryan Seacrest taking the stage – he introduces the Idol judges: Jennifer Lopez, Harry Connick Jr, and Keith Urban. Next Ryan introduces this season’s Top 5 singers: Jax, Rayvon, Nick Fradiani, Tyanna Jones, and Clark Beckham. Special guest Russell Crowe delivers tonight’s envelope of results – and we will soon find out who the Top 4 are according to America’s votes.

Tonight the singers will be performing hit songs from the judges’ hometowns. Up first is Clark Beckham, he takes the Idol stage and performs “Living For The City” by Stevie Wonder. Keith Urban kicks off the critiques with, “Great opening to the show! I love when you play piano, it’s a good move. The whole thing got really in a zone when you played. When you sing and when you play the combination of them have you singing a different way. Really good stuff.” Jennifer adds, “I thought it sounded really good too. When you are with your instruments you are really comfortable, if you had stayed over there and sang at the whole time it would have probably taken everything to the next lever. It was a really good start to the show.” Harry closes with, “Really nice performance, there is five of you left so we can get down to the nitty gritty. I am actually glad to hear you sing without the piano, but there is a certain packet – sink in that groove, you need to drive that home. We’re nit-picking now, but groove is a big deal!”

Jax takes the American Idol stage next and performs “Empire State Of Mind” by Alicia Keys. [VIDEO HERE] Jennifer comments first, “I feel like you really mean business now, you’re like I need to be looked at as a serious artist.  Was this the best song?  I don’t know, I wasn’t feeling it as much.  But, I do see Jax that you really have potential to take the whole thing.  You really need to be careful with the songs that you choose from now on.”  Harry adds, “I really dug out, you have a really unique tone to your voice.  Is your voice hoarse tonight?  Know what I loved about that?  You just sang through it and nobody cared and you killed it and it was great.”  Keith closes with, “I loved the song for you and your voice was in a beautiful register when you sat at the piano.  Even when you aren’t feeling 100% like tonight you still powered through.  I thought it was really great Jax.”

The next contestant to move forward to the next round of the competition is Nick Fradiani, Nick hits the Idol stage and performs “Bright Lights” by Matchbox 20.  Harry begins the critiques with, “Week to week you are looking more comfortable and that was by far the most comfortable performance that you have done.  I’m glad you played a Matchbox 20 song, because you sound like Rob Thomas to me, and I really enjoyed it man.  It’s exciting in here.”  Keith agrees, “ I can’t remember the last time I saw somebody that has the incredible killer instinct that I seen in you.  Every time you perform it is getting stronger and better.”  Jennifer closes with, “You’re peaking!  It’s just so exciting, you feel the energy in the room, so comfortable and so perfect.  I can’t wait for you to watch it back – you are going to love it!”

After Idol judge Harry Connick Jr. takes the stage and performs an original song that he wrote about New Orleans – it is time to learn which contestant will be going home tonight.  Will it be Tyanna Jones or Rayvon Owen?  Ryan Seacrest reveals live that according to America’s votes last week – Tyanna is officially eliminated, Rayvon is safe for another week and is officially in the Top 4.

Before Tyanna leaves Ryan shares a video of her most memorable moments on American Idol, and Tyanna performs one last song – “Run The World,” by Beyoncé. [VIDEO HERE]

Rayvon Owen takes the Idol stage next and performs Lady Antebellum’s hit song “I Need You Now.”  Keith Urban kicks off the critiques with, “I love when anybody takes a song and makes it their own – I give you props for that.  I would probably have a little less of the dramatics and a little more heart.  I could still use a little more carefree from you.”  Jennifer agrees, “I think it’s about connection, like in acting it is all about having something personal to you.  It’s the same thing with singing, it has to be real to you.  If we don’t feel like you are actually singing something from your heart, just that connection just make that thing happen.”  Harry closes with, “At times singers have a tendency to overdramatize a lyric.  I thought you were 100% on the delivery of that lyric, it was really wrong.  Nothing substitutes for an earnest young man like yourself singing a beautiful ballad.  Rayvon, I thought you sang the pants off from it.”

Now it is time for Clark Beckham to perform his second song of the night, “Your Man” by Josh Turner. [VIDEO HERE]  Jennifer Lopez begins the critiques, “There was some controversy there, should you sing the song or should you not sing the song?  I thought you sang it well, but that is not the point.  The argument is, is this the type of musician you want to be?  But, you’re on American Idol.  Is this the right song for that?  Is this your gravy song?  Your earlier performances blew us away, and this song didn’t do that.  That’s what your mentors were talking about.  How far do you want to go?”  Harry Connick agrees, “What it really boils down to is hyper-sensitive song choice.  You need to think if this is the last song I have could I win on this song alone?  Nobody can drop the ball now, you have to knock everything out of the park now.  Everything!”  Keith closes with, “I think that in terms of singles, if you are taking a single to radio and you have an album full of songs – there is a killer.  A song that everyone says will kill it.  They’re the songs you need right now, you don’t need album tracks, you need hit singles!  You got the voice for it.”

Jax is up next, for her second song Jax has chosen “Human” by Christina Perri.  After Jax’s performance Harry Connick JR. begins the critiques with, “This is a perfect example of the technical versus the emotional.  There were pitch issues all over the place, but I really felt what you were doing – you completely let yourself go.  I thought it was really nice Jax.”  Keith adds, “It was such a perfect song, because you’re fragile and only human.  You killed it tonight, really really good.”  Jennifer closes with, “I loved it too and I love the way you look in to people’s eyes in the audience.  There are times when your tone is so beautifully pure, that is what singing should sound like and feel like.  It was really great Jax – really good!”  Harry jokes, “I thought we lost her in the clouds, I was scared you were going to inhale the smoke.”

Rayvon Owen heads back up on the Idol stage and performs Justin Bieber’s hit song “Believe” [VIDEO HERE] and dedicates it to his mother. After his performance Keith Urban raves, “You sang phenomenally just then, but the most incredible thing was watching your mom over there – she was at church. It was beautiful Rayvon, so good!” Jennifer agrees, “That is what I am talking about. Did you see the difference between what you did there and what you did before? I’m crying here, everyone was crying here. That’s the connection, every single song every single time. Beautiful, perfect, they love you!” Harry closes with, “I looked it up and there were like 15 people that wrote that song – it was like a big group effort. And, I think every single person that wrote that song would be happy to hear you sing it like that.”

Nick Fradiani closes tonight’s episode of American Idol with the Rascal Flatt’s song “What Hurts The Most.” Jennifer begins the critiques, “I am just going to go out on a limb here and say you are the star of the night. That was really great.” Harry agrees, “I could really hear you singing that on your CD man. That sounded great, everyone knows that song, I thought you killed it. Loved it!” Keith closes with, “Yeah I got a feeling that your fans are going to show their support in a huge way when the recorded version of that rocks up the charts. It felt really great!”