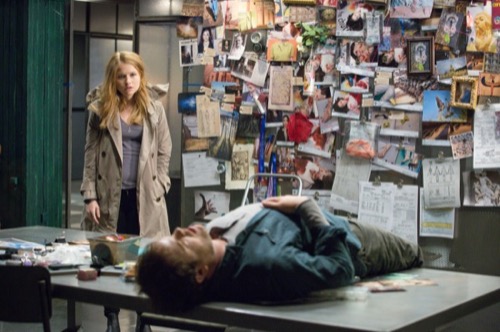 Tonight on FOX Backstrom continues with an all new Thursday February 5, season 1 episode 3 called, “Takes One to Know One,” and we have your weekly recap below. On tonight’s episode, Backstrom [Rainn Wilson] considers the murder of a drag queen and blogger, who’s a prominent member of Portland’s LGBT community, a hate crime, and the case takes a surprise turn when Backstrom’s gay tenant becomes a suspect.

On the last episode, Arson investigator Samantha Orland (guest star Angelique Cabral) called upon the Special Crimes Unit for help with a case that got escalated to attempted murder when a serial arsonist’s most recent fire involves a family. Although all evidence points to a local fire artist, Backstrom was positive their arsonist was someone they least suspect. The investigation took a turn when the team discovers evidence missing from the crime scene and Backstrom suspected someone insides the investigation. Meanwhile, Backstrom got tormented by childhood neighbors who stole something very special from him when he was younger and Valentine helps Niedermayer recover stolen evidence. Did you watch the last episode? If you missed it, we have a full and detailed recap right here for you.

On tonight’s episode as per the FOX synopsis, “Backstrom considers the murder of a drag queen and blogger, who’s a prominent member of Portland’s LGBT community, a hate crime, and the case takes a surprise turn when Backstrom’s gay tenant becomes a suspect. Meanwhile, Backstrom is pulled before the Civilian Oversight Committee as the result of his shooting a suspect in a previous case. To complicate matters, his former fiancée is in charge of the group.”

Don’t forget to join us for our live recap tonight at 9:00 pm when Backstrom airs on Fox. While you wait for the recap, check out a sneak peek of tonight’s episode below!

A youth pastor, who was sadly only 21 years old, was found murdered inside of her own church on tonight’s all new episode of “Backstrom”. Apparently, she had been stabbed multiple times and the aggression of the assault along with her age has led the detectives to believe her murder could have been a result of a sex crime. It seems people in Emma Germain’s church weren’t allowed to have sex before the age of 21 and Emma had just recently turned that age herself so Backstrom figured out it had to be all tied together.

And, although, Backstrom finds all religion hostile and cult like, he does want to find out who killed Emma. But his methods have always been his own and they sometimes get in the way of a legal investigation.

Backstrom, unfortunately, stole a security camera off of a woman that was protesting outside of the church and then he went about interviewing all those who were close to Emma like they were weirdoes. You know for being religious in the first place. And, well, methods tend not to yield much.

But when stole some files from the church – that at least gave the detectives a viable suspect.

Vince Cropper had been signed in right around the time Emma had been murdered. Not only is Vince a part of the church but he’s also a private investigator. And whoever had been drinking tea with Emma, on the night she died, had wiped been smart enough to wipe off their fingerprints from the mug he or she had used.

And rather than waste time on him, Backstrom decided to use another method to finding out about this church. Yet, he did that by confront them all at probably the worst time ever. Backstrom crashed Emma’s wake and then he told the congregation all about the thousands of dollars that wasn’t being moved in and out of the church without any explanation. Then he told them if they knew anything else – either about the money or Emma – they knew where to find him.

So, with some many unconventional “methods” being used, it’s no wonder Backstrom is being investigated in regards to that shooting that happened not that long ago. However they could have sent in a different investigator rather than his ex-fiancé Amy. Amy can get under Backstrom’s skin like no one else. And apparently she’s also really good at flattering people because she’s managed to get Nicole on her side in spite of their one conversation.

Hence, Amy is more than just a pretty face. She’s also kind of a shark that knows how to get her way and, regrettably, there’s also reason why an internal investigation at the moment is a really bad idea. For example, not only has Backstrom had rough time falling asleep lately but he’s started rely on booze and/or pills in order to get a good night’s rest.

That behavior, so far, hasn’t affected his work but superiors still won’t like hearing about it if Amy includes that in her file.

Though, hopefully, by time they do get word of it – Backstrom would have finished wrapping up his current case. His announcement or whatever did yield some results and it got people from inside the church talking to the detectives. They found out about an affair between Emma and the church leader.

And eventually they found Emma’s killer. But their killer hadn’t been working alone. Backstrom believes the church leader had a hand in Emma’s murder and at first he couldn’t find proof to verify it.

So, Backstrom did what he does best and he still somehow found a way to take down the bad guy. And here’s how he did it: Unable to get a murder charge to stick – Backstrom brought up the churchleader on Statutory Rape Charges. And at least he’ll be away from the church!