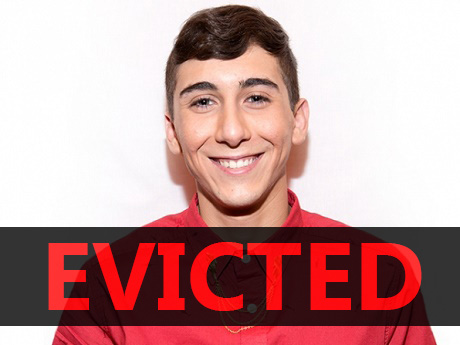 According to the Big Brother 17 LIVE broadcast airing on CBS, the Eviction Ceremony has just taken place and Jason Roy, the House loudmouth, has officially been evicted. There was a lot of strategy talk and game play going on in the BB17 house leading up to the Week 5 eviction ceremony. After the Power of Veto ceremony, Jason Roy and Becky Burgess found themselves up on the chopping block – and one of their days were numbered.

BB17 spoilers from the live feeds teased that Jason decided to launch a campaign to save himself at the last minute; however, he and his sidekick Meg failed miserably after Vanessa Rousso shut it down. Jason and Meg tried to convince Shelli and Clay that Becki and John might try to come after them in the long run – and Jason pledged his loyalty. Jason’s plan might have worked, except Vanessa reminded Chelli that Jason came from a four person alliance and Becki didn’t, and in the long run he was much more dangerous in the game.

Of course, Jason’s level of “danger” is pretty questionable – his stint on the nomination block probably had a lot more to do with his annoyingness factor. Seriously, who would you rather be locked in a house with all summer – Jason or Becky? Now that Jason is gone it will be interesting to see who wins the Head of Household competition, and whether the power will shift. Meg will definitely want to avenge Jason’s eviction if she wins HOH. Stay tuned for the Big Brother season 17 Week 6 HoH results!

Do you think the houseguests made the right decision evicting Jason? Or should they have kept him and sent Becky home? Let us know what you think in the comments below and don’t forget to check CDL for all of your Big Brother spoilers and recaps.