Chris Soules, Whitney Bischoff Wedding Cancelled: Bachelor Only Cares About Dancing With The Stars and Fame 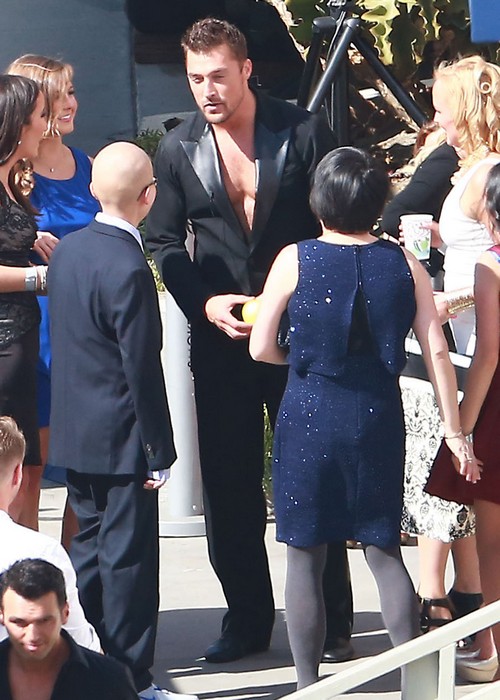 Chris Soules’ fiancée and 2015 winner Whitney Bischoff is having second thoughts and has put the wedding she has been planning on hold. We all knew Chris Soules had no intention of getting married and starting a family after he finished filming ABC’s The Bachelor – but Whitney Bischoff was ridiculously optimistic and certain she could get Soules down the aisle at the cute farm wedding she had been planning, even though he refused to actually set a date for the nuptials.

The May 4th issue of Life & Style Magazine reveals that Whitney Bischoff has officially put the wedding on hold, indefinitely after she overheard Chris arguing with his Dancing With The Stars partner Witney Carson. Soules and Carson’s heated argument at rehearsal scared Bischoff because she had never seen that side of her fiancé before – and she realized that his quest for fame in Los Angeles and winning DWTS was clearly his number one priority.

Life & Style Magazine’s inside sources explained, “They were going to get married fast and have a baby, but it’s not happening. No registry. No location. Nothing.” The tabloid goes on to say what CDL has been saying all along – Chris Soules has never had any intention of marrying Whitney Bischoff.

He proposed to the Chicago nurse by default because the girl he actually wanted to be with – Becca Tilley – told him she would not say “yes.” The only reason Chris has kept the rouse going is because he knows that if he and Whitney Bischoff break up, the media will stop stalking him and Bachelor fans will stop voting for him on Dancing With The Stars. Frankly it is almost laughable that Whitney Bischoff “put the wedding on hold,” like there was actually going to be one. Chris Soules wouldn’t even set a date!

So, Bachelor fans, what do you think of Whitney calling off the wedding plans? Do you think she is just saving face because she knew she was never going to get The Bachelor down the aisle? Will she continue to support him during his time on Dancing With The Stars, or will she give up and head back to Chicago? Let us know what you think in the comments below!