‘Days of Our Lives’ Spoilers: Eve Puts Revenge Plot Into Action – Nicole Confesses to Eric, Xander’s Out for Blood 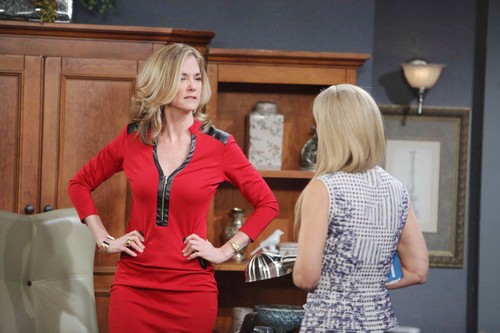 “Days of Our Lives” spoilers for Thursday, June 18, tease that Brady (Eric Martsolf) will eavesdrop on a conversation between Theresa (Jen Lilley) and Anne (Meredith Scott Lynn). We don’t know for sure what Brady will overhear, but it’ll prove very enlightening. After Theresa caused Melanie (Molly Burnett) to leave Salem, Brady declared that he wanted as little communication as possible with his ex. Brady even took back his offer of allowing Theresa to move into the mansion. However, it appears whatever Theresa says will tug at Brady’s heartstrings. It looks like Theresa will be moving in with Brady after all. In fact, DOOL rumors say we could see Brady start to fall for Theresa as they bond over their son.

Meanwhile, Eve (Kassie DePaiva) will put her revenge plot into action. “Days of Our Lives” spoilers indicate that Eve will have a chat with Marlena (Deidre Hall) and she’ll get some useful updates on the Horton family history. Eve has already been doing some research on Laura’s (Jamie Lyn Bauer) mental illness and she’s anxious to find out more details. Perhaps Eve will hint that Jennifer (Melissa Reeves) is just as crazy as her mother. Eve certainly doesn’t have a problem with delivering low blows. Nevertheless, vengeance isn’t really going to make Eve feel better. Losing Paige (True O’Brien) is probably the worst thing that’s ever happened to Eve and taking jabs at the Hortons won’t fill the void in her heart. 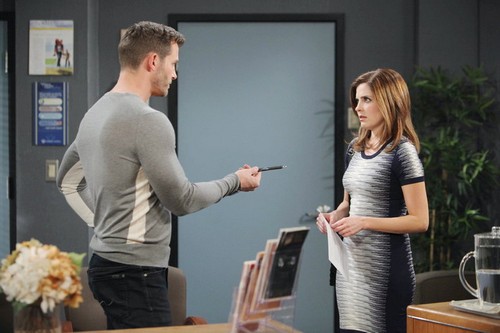 Other “Days of Our Lives” spoilers reveal that Nicole (Arianne Zucker) and Eric (Greg Vaughan) will hide out from Xander (Paul Telfer). As they try to make their escape, Nicole will open up about how she’s been playing Xander to learn more about his scheme with Serena (Melissa Archer). Eric will be upset that Nicole has put herself in harm’s way, but he’ll undoubtedly be touched that she’d risk so much to protect him. “Days” viewers know that Nicole usually has good intentions, but things never seem to pan out as well as she’d hoped. Fortunately, this frightening ordeal will strengthen Eric and Nicole’s friendship. It might even turn into something more. Stick with DOOL to see if this will be a new beginning for Eric and Nicole.

So “Days” fans, what do you think about the news that Brady will overhear Theresa talking to Anne? Will he discover that Theresa isn’t as coldhearted as she seems? What about Eve’s plan for revenge? Is Eve just trying to cope with the pain? Will Nicole and Eric’s friendship blossom into love once again? Let us know what you think in the comments below and don’t forget to check CDL tomorrow for the latest “Days of Our Lives” spoilers, rumors, updates and news.