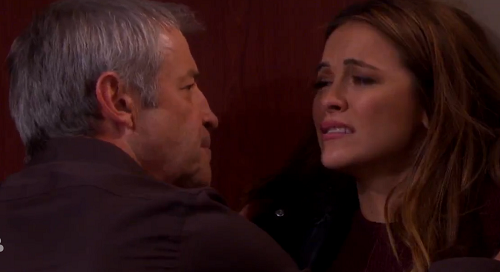 “Days of Our Lives” spoilers tease that the week of January 12 will be an explosive one on the NBC soap. The DOOL writers have been teasing for quite a while that fans could expect a major catfight between Salem newbie Serena Mason and Nicole. Despite the fact that Nicole is trying to move on with Daniel, she is still hung up on her ex Eric and his new flame Serena – and just not capable of letting sleeping dogs lie. Serena is livid with Nicole because she has been investigating her and sneaking around her hotel room – hoping to find information that would derail her new relationship with Eric.

According to an all new “Days of Our Lives” spoiler video for the week of January 12, the tension between Serena and Nicole finally boils over and the two women get into a serious altercation. In the DOOL spoiler video, Nicole accidentally bumps into Serena and spills her drink on her – and things escalate from there. Serena growls that Nicole is a “nasty piece of work,” and then attacks her and the two girls begin physically fighting.

In other “Days of Our Lives” news, the all new promo video for the NBC soap teases that fans can expect to see Paige continue to investigate JJ’s affair – determined to find out who his mistress is, unbeknownst to her it is actually her own mother, Eve Donovan. The spoiler video also shows an explosive scene between Jordan and Clyde. The heartless business man slams Jordan up against the wall and reveals that not only did she kill her mother, she killed the baby that she was pregnant with as well.

“Days of Our Lives” coming and goings confirmed months ago that Jordan is exiting the NBC soap – and rumors have been flying around that she may turn herself in for her mother’s death and go to prison, or perhaps even kill Clyde and then run from the cops and leave Salem. Considering the intense scene in the new spoiler video – either of those possibilities are very likely.

So, Days fans, are you excited to watch Nicole and Serena throw down? Which woman do you think will come out on top? And what do you think of the bombshell Clyde drops on Jordan? Do you think that she will confess to the crime and go to prison and that is how she will exit? Let us know what you think in the comments below and don’t forget to check CDL tomorrow for more “Days of Our Lives” spoilers and news.