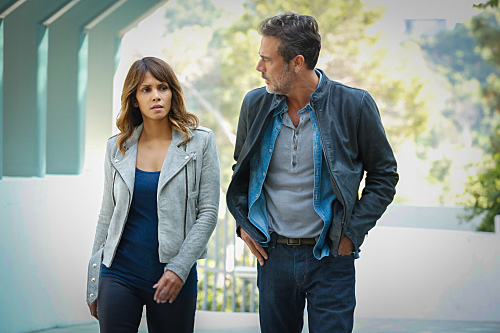 Tonight on CBS Steven Spielberg’s Extant starring Halle Berry returns with an all new Wednesday July 1, season 2 premiere episode called, “Change Scenario,” and we have your weekly recap below! On tonight’s episode season 2 begins with Molly [Halle Berry] escaping from a psychiatric hospital to investigate bizarre deaths similar to those she witnessed in space. She soon meets a determined cop who just signed on to the case.

On the last episode Molly returned to space in an attempt redirect the Seraphim away from Earth and protect the world’s population from the deadly spores. Also, John discovered that Odin’s plan had put Ethan in terrible danger, on the season finale. Did you watch the last episode? If you missed it we have a full and detailed recap, right here for you.

On tonight’s episode per the CBS synopsis “six months after her life unraveled and dark secrets were revealed, Molly is confined to a psychiatric hospital when she learns of bizarre deaths that sound eerily similar to those she witnessed in space. When she escapes to investigate, she crosses paths with JD Richter, a determined cop who just signed on to the case”

Tonight’s episode looks like it is going to be great and you won’t want to miss it. So be sure to tune in for our live coverage tonight at 9 PM EST! While you wait for our recap let us know how excited you are for the second season.

Molly Woods saved the world last season yet now her life is far from what many of us thought it would be like. In fact it’s depressing. And the only one Molly can blame for all of this is the government. She thinks they secretly want to get rid of her.

And to be fair she might have a point.

On tonight’s season two premiere of “Extant” we find out that Molly has been forcibly committed into a “wellness center”. For that seems to be a better turn of phrase than “nuthouse”. And while she’s been trying to come to terms with her life on what was originally supposed to only be a 90 day psychiatric hold, their appears to great being like last time intent on shutting her up.

One day everything was fine and she looked to be repairing her family and in the next her like was just gone.

Yet six months earlier, Molly was hailed as a hero. Molly had told the Senate about what she and her son Ethan did in order to save the planet. From a potential invasion. And from there she was congratulated plus publicly thanked. But soon afterwards that’s when things went incredibly wrong.

Ethan’s mainframe had been recovered and his father was later able to recreate his body. So Molly should have had her family back. Her son could come home and her husband, who had supported through everything, was happy again.

But then she caught something, a moment really, between her husband and his assistant Julie. Therefore Molly felt like there was something more going on than she knew and she returned home with Ethan intent on investigating it. And, despite John’s best efforts on erasing the home security feed, Molly eventually found one camera that was still operational when she first went to space.

And so imagine Molly surprise when she saw for herself that her husband had been playing house with Julie while she was away.

That had felt like a betrayal. Especially as John knew that her career was bound to take her away yet used that as an excuse for turning to Julie. So Molly was going to get worked up when the second axe fell.

The government had used national security as a means to take custody of Ethan. They said he was risk and after he easily broke pass several firewalls to blow up a facility – they no longer felt it was safe to keep him around. Thus they were planning decommissioning him. Otherwise known as turning him off.

However, when the government took him into custody, Ethan ended up running into Julie. It seems Julie had switched sides. Home Sec had reached out to her and told her that they wanted to begin creating militarized Humanics so Julie switched sides.

And first she claimed she did so because she was a patriot. Though, later, when John had told her about his son then that’s when she revealed her real motives Apparently, Julie wanted to play house again. Like they did before with him, her, and Ethan.

So she told John to get on board with the new manifesto and that way they could be their own little family. But, sadly for her, John didn’t want to be a family with anyone besides his wife. And so when it became apparent that he was still going to choose Molly, Julie reported her blunder.

It looks like she had told him too much and whoever is now in control felt like they needed to get rid of John.

So someone sent out orders and “John” was handled.

John later died in a freak car accident and in a completely unrelated case Molly set her home on fire. So that in addition to attacking Julie at John’s funeral is what landed Molly at the wellness center. The same center that is refusing to let her leave.

Because what started out as 90 mandatory days turned into months. And thanks to Sam, who will do anything she’s commanded to do, Molly is on drugs that are essentially meant to numb her.

But there was one thing that woke her up. Molly had heard about a string of women that had had their stomachs mutilated. Almost as if something had burst right out of it. And she put the pieces together.

So, after months at the center, Molly broke out and ran into a detective checking out the latest scene. See he thought he was chasing after a butcher but Molly informed him that his victim had been pregnant. In fact all the victims were pregnant.

And after Molly had been returned to the center, JD came looking for her when a theory about the victim panned out.

He needed help on the investigation and she clearly knew more than he did. So he broke her out with the help of a judge. And now it’s up to Molly to tell him about what he’s really chasing. Because that appears to be a man that looks and is physically like her son currently hitting on women probably hoping to impregnate them.

Although that would go against everything Molly had been told by a U.S. general. So did Molly’s other son actually die or was his “death” part of a cover-up?