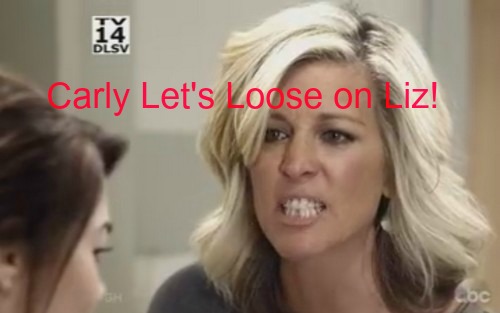 “General Hospital” (GH) spoilers reveal that Carly Corinthos (Laura Wright) will not hold back and will go after Liz Webber (Rebecca Herbst) now that she knows about the long-term Jason Morgan (Billy Miller) lie.

After Jason came to Sonny Corinthos (Maurice Benard) to air out his issues, Sonny turned around and told them all to Carly. Of course, he made her promise not to mention it to Jason. She promised, but Carly is the queen of loopholes.

Instead of going to Jason, Carly goes to Liz and confronts her. And Carly doesn’t even do the kindness of going to Liz’s house so it can be a private conversation. Nope – Carly wants this to be as public and humiliating as possible.

Remember what Carly did to Ric Lansing (Rick Hearst) at the Nurse’s Ball? Carly loves a public tear-down of anyone she considers an enemy. You’ll also recall that Carly embarrassed Liz at the Nurse’s Ball – Carly acted like she didn’t mean to hurt Liz but it was just icing on the cake since Carly doesn’t like Liz.

Now Carly is back to serve up more public humiliation on Liz at her job. Carly finds Liz at General Hospital and lays into her about her months of lying to Jason. Liz really can’t defend herself because she did exactly what Carly is saying she did.

The only defense Liz has is that she did it all for love. Carly is going to lay into her with a whole bunch of accusations about how she let everyone think Jason was dead and how dare she keep Jason from his sons, and so much more.

If Liz has anything to say, maybe it will be that Carly only wants Jason around to do her and Sonny’s dirty work and prop up whatever ridiculous scheme Carly has going. Jason was Carly’s personal fixer and Liz can tell her that Jason is doing well to avoid Carly.

Carly will rant and while this goes on, a surprising person eavesdrops. It’s Franco (Roger Howarth) and he listens while Carly does to Liz what she did to him last week. Remember when Carly cornered Franco and told him his life was going to blow up?

She told Franco that Jason was coming for him and pretty much crapped all over his life. Forget how dirty Carly did Franco by cheating on him. Carly is some piece of work. After Carly ends the sideshow and walks away triumphant, Franco approaches Liz.

He offers her a sympathetic ear and tells her he’s been on the receiving end of a Carly attack and knows how vicious and unfair it can be. Liz is surprised because she’s never spent much time with Franco and likely only knows the bad stuff about him.

Liz and Franco could probably start a support group for people who have been traumatized by Carly’s bullying. The bottom line is, though, nothing that Carly says really matters to Liz. All that matters to her is Jason.

Check back with CDL often for more “General Hospital” spoilers, gossip and more.