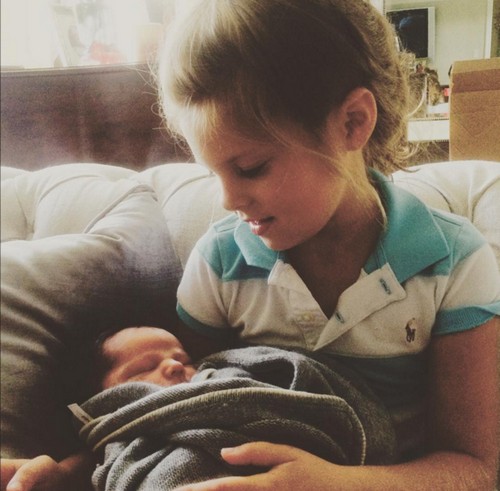 General Hospital (GH) spoilers announce the happy news that Michelle Stafford (Nina Clay) has had another baby by surrogate! Former “The Young and the Restless” (Y&R) (Phyllis Summers) and current “General Hospital” star, Michelle Stafford announced on Instagram on Saturday that her baby arrived- Jameson Jones Lee Stafford was born. She posted a beautiful picture with her five-year-old Daughter, Natalia holding the newborn baby boy.

In the image, five-year-old Natalia held her brother while he slept. She smiled down at the newborn swaddled in a pastel blue fleece blanket. Michelle captioned the post, “The Veg and Jameson Jones Lee Stafford…”

She added three hearts after her post. Michelle had been nervously awaiting the birth of her second born son- trying to make sure she had all the things she needed for his highly anticipated arrival. Michelle and Natalia must be incredibly excited that he’s arrived.

Michelle announced in July 2015 that she was expecting her second child by a surrogate. Her first child, Natalia was also born via a surrogate mother. Michelle Stafford is active on social media and spoke at length during Jameson’s pregnancy about how rude she felt it was to question why she chooses surrogacy to bring her children in the world. She refused to answer if she used her eggs or any other personal information pertaining to the conception of either child.

Michelle Stafford will have her hands full in the coming weeks. Not only is she busy with portraying Nina Clay on “General Hospital,” but her popular web series “The Real Stafford” releases the second season in the next few weeks.

When you add a newborn and a five-year-old to the mix- it will be pretty chaotic for her for a few months. If anyone can pull it off, Michelle Stafford would be the one to do it. She will likely take a few weeks off from filming to bond with her new baby. Don’t forget to come back later for more juicy “General Hospital” spoilers, news, and updates.