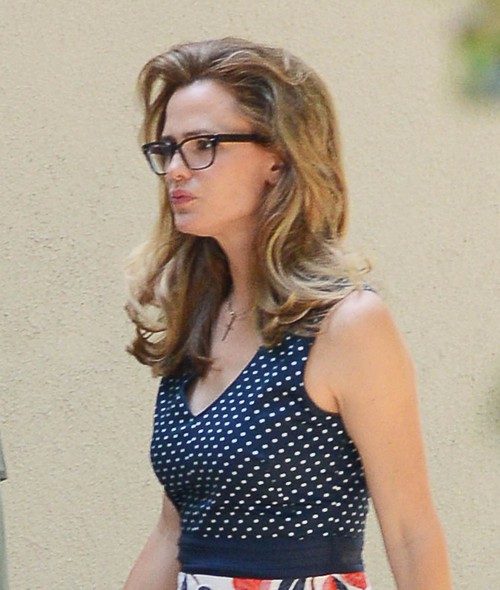 Should Jennifer Garner stop hating on fired nanny Christian Ouzounian and focus on Ben Affleck’s former fiancee Jennifer Lopez? Is the world ready for Bennifer 2.0? Life & Style magazine says Ben Affleck and Jennifer Lopez may be pondering getting back together. The duo are rumored to be texting and calling each other in the wake of Ben Affleck’s split with Jennifer Garner, but haven’t gotten together for a face to face just yet. Ben Affleck was trying to set up a “play date” with JLo, but when news of his tawdry nanny-gate affair with Christine Ouzounian broke, he ditched the plans because the media was all over him.

But Ben has cut the naughty nanny loose in advance of getting back with Jennifer Lopez and giving their relationship another go. Jennifer Lopez, for her part, has been cooling off her relationship with backup dancer Caspar Smart so she can make room for Ben Affleck in her life. In fact, Ben and JLo have been in touch since the Oscars earlier this year and have been texting and emailing since then. But, if the rumors are true, Ben and Jennifer Garner were already separated at the time.

Seems Ben and Jennifer Garner were living on the same property but not as husband and wife and they were discussing a reconciliation then waiting on the best timing to announce their split. The JLo/Ben reunion makes sense from both sides – here’s why. Jennifer Lopez was head over heels for Ben Affleck and was devastated that he called off their wedding just prior to the big day. Ben was the first guy to dump her and she was heart broken – that made Ben the one that got away from her.

From Ben’s side, Jennifer Lopez adored him and thought he was perfect – a far cry from his uber-critical wife Jennifer Garner. Ben got total acceptance from JLo while Jen Garner made him feel like he could never do anything right. Plus, let’s face it, Jennifer Lopez and Ben Affleck were smoking hot together. Remember her Jenny from the Block video? Ben was all up on her juicy big behind and obviously loving it – that’s a far cry from the super svelte Garner.

And, let’s face it, Caspar Smart has just been a low-maintenance space holder in Jennifer Lopez’s life. He gets along with the kids, isn’t threatened by her ex Marc Anthony, and does what she wants. Caspar is just an easy rebound guy that stuck around longer than he should have. Rumor also has it that another contributor to the Ben and JLo break up was Ben’s BFF Matt Damon. Rumors persisted that Matt Damon was not a fan of the high profile singer and encouraged his best bud to call off the wedding.

But now that Matt Damon has had 10 years of dealing with the uptight Jennifer Garner, Matt may be rethinking his stance. Matt’s wife Luciana has never cared for Jennifer Garner, but since Luciana Barrosa is Argentinian and JLo is Puerto Rican, maybe they can bond over their shared Hispanic roots. Not that they are from identical backgrounds, but both speak Spanish, and have similar religious upbringings. That’s got to at least ease the way for a friendship.

Another of the reasons that Ben backed off his relationship with Jennifer Lopez was that he didn’t like the media scrutiny. But now, since he’s being stalked by paparazzi anyway, Ben may as well have the woman he wants. Wait for it – give it a few months for the Garner/Affleck divorce dust to settle and then see what happens. Looks like the divorce from Jennifer Garner may set Ben Affleck back a few million, but when it comes to JLo, her love don’t cost a thing…