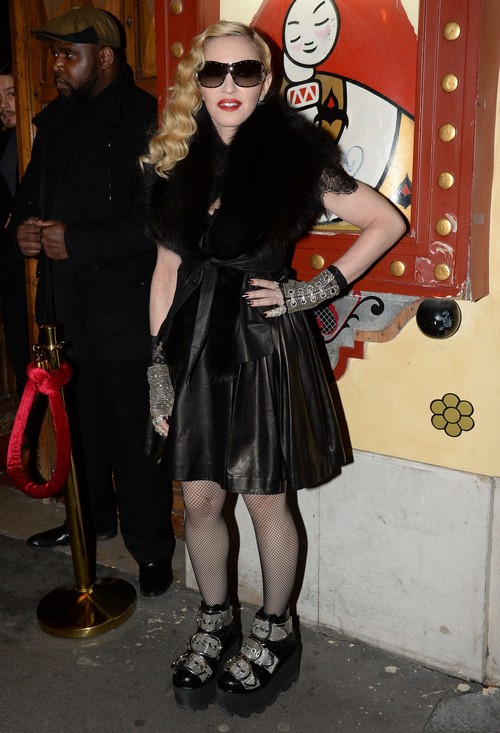 Madonna isn’t the least scandalous person in the world, but she’s famous enough that you’d think she would have met President Obama by now. However, by her own admission, she’s much ‘too shocking’ to merit an invitation to the White House.

Madonna indirectly blames Beyonce for not being invited to meet President Obama, explaining, “He probably thinks I’m too shocking to be invited to the White House … If I was a little bit more demure ….. If I were just married to Jay-Z.”

Well, Beyonce and Jay-Z do meticulously control their PR images, so it’s not just the marriage that makes them so appealing to politicians. However, there are a lot of other elements involved, especially the fact that both Beyonce and Jay-Z did a lot to help Obama’s campaign – both times. Madonna, on the other hand, did not…

However, I don’t think she’s completely off base here. While I don’t think it’s the ‘shocking’ factor that Madonna should be focusing on, I definitely think that she tends to put out a vibe that’s not necessarily politician or President friendly. I mean, the Obama administration isn’t going to invite her over if she’s flashing her crotch at the public, right? And in the same way, if she’s wearing fishnet stockings and ripped tights and toting around a boy toy half her age.

What do you guys think about Madonna’s comments? Obviously, Madonna not meeting President Obama has really nothing to do with Beyonce, but do you guys think there’s some minor correlation? COULD Obama think that Madonna is too ‘shocking’ to come all the way to the White House and meet him? Or is she exaggerating? Plus, it sounds like she holds a little grudge towards Beyonce and Jay-Z there, doesn’t she? Otherwise, why point them out specifically, especially when there are a million and one diva singers and musicians that have met the President one on one.