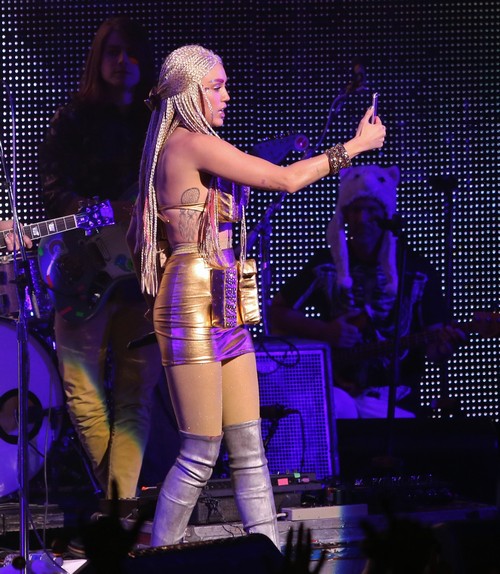 Miley Cyrus ridiculed Taylor Swift and gave the diva a run for her money when it came to bringing her squad onstage. Miley finished up her Milky Milky Milk Tour in a display of oddity that only she can pull off. Then the controversial singer paraded her pals Pam Anderson and Zac Efron on-stage during the bizarre performance.

Cyrus player the last stop of her tour at The Wiltern in Los Angeles and made sure to take a page out of Taylor Swift’s playbook by bringing some special guests on stage. Pam Anderson partied right alongside Miley Cyrus as she finally showed a bit of age in a black swimsuit while holding a sign that read, “Save the whales.”

As if Miley hasn’t already done enough to shed her Disney persona, the rebellious pop star performed topless on stage while other celebs including Zac Efron, Bella Hadid and Cody Simpson cheered her on.

Miley was obviously making fun of Taylor Swift and her notorious squad of beautiful women that she prances across the stage at many shows. Taylor Swift has come under fire from feminists recently for being exclusionary, elitist and anti-feminist. Cyrus formed her own squad during performance on Saturday, December 19 and entertained the crowd by bringing Pam Anderson and Zac Efron to the stage.

The Milky Milky Milk Tour wrapped up its run promoting the most recent album Miley Cyrus and Her Dead Petz. Miley has certainly proved with the Dead Petz tour that she is definitely detached from the sticky sweet persona of her role as Disney’s Hannah Montana.

As a matter of fact, Miley’s mantra of partying hard, being nice to animals and just being plain weird was pretty clear during the recent tour.

Miley’s jab at Taylor Swift during the final performance was also pretty clear. The Wrecking Ball singer doesn’t often take jabs at other artists but Taylor’s picture of perfection has to bother Miley. Cyrus is the antithesis of the perfect, pretty girl image portrayed by Swift.

Her club kid style performances and over-the-top antics prove that. Miley’s choice of last generation’s sex symbol Pam Anderson to come onstage and help work the crowd was interesting yet a perfect choice.