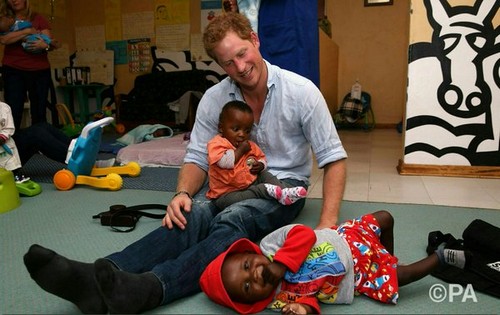 Prince Harry will visit South Africa and this has caused whispers of a reignited romance with Chelsy Davey. Will there be a royal engagement announcement for Christmas?

Zimbabwe born Davey dated Harry from 2004 until 2011. The couple reportedly split because Chelsy was unhappy with Prince Harry’s partying. Kate Middleton has been playing matchmaker for quite some time and looks as if the Duchess of Cambridge’s persistence is paying off. Reportedly Kate and Chelsy got very close when dating the royal brothers and Duchess Kate has missed Chelsy’s companionship.

Over the summer Harry increased his royal commitment to organizations that offer support to children and families. Was this the prince’s way of showing Chelsy Davey that he is serious about settling down and starting a family? The partying prince has had quite the reputation as a ladies man, but is Prince Harry ready to leave those partying days behind? Is the fifth-in-line to the British throne ready for diaper duty?

It’s no secret that Kate Middleton is desperate for her brother-in-law to get married. A royal engagement announcement and royal wedding would most likely take some of the pressure off the Duchess of Cambridge, at least for a little while.

Duchess Kate is reportedly battling anxiety, depression and anorexia. Having the spotlight turned on Chelsy could give the Duchess a chance to relax and spend more time with Prince William, Prince George and Princess Charlotte.

Will Prince Harry use this official visit to South Africa to reconnect with Davey? Many believe that Harry and Davey never broke things off permanently. Has the couple been secretly dating off-and-on for the past few years?

Queen Elizabeth needs to give approval in order for Prince Harry to propose to Chelsey. It shouldn’t be difficult – Palace insiders have said that Queen Elizabeth approved of Prince Harry dating Chelsey. Prince Charles and Camilla Parker-Bowles reportedly like Chelsy, as do Kate Middleton and Prince William.

Do you think Prince Harry will propose to Chelsy Davey while in South Africa? Is Harry really ready to settle down? Royal watchers would like to see Prince Harry happily married and Christmas is a wonderful time of year to propose marriage.

Let us know what you think in the comments section below and come back to CDL for all your Royal Family news, gossip.