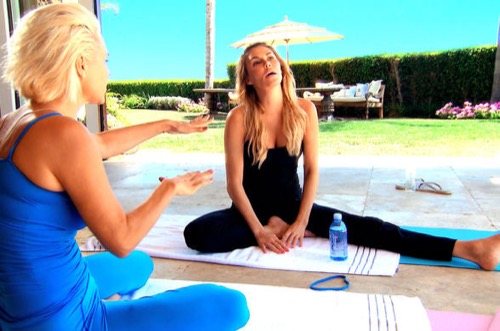 The Real Housewives of Beverly Hills returns to Bravo tonight with all new Tuesday February 10, season 5 episode 13 called, “Sister Act,” and we have your weekly recap below. On tonight’s episode, after the blow up at Kyle Richards’ gay mixer, the other women speculate about Brandi Glanville’s influence over Kim Richards.

On the last episode, Lisa Vanderpump was surprised when adopted son Max decided he wanted to take a DNA test to discover his heritage. Brandi and Kyle both visited Kim, who had just been released from the hospital, and a session of she-said-she-said ensued. Later, Brandi showed up uninvited to Kyle’s gay mixer where insults were hurled and things got ugly. Did you watch the last episode? If you missed it we have a full and detailed recap right here for you.

On tonight’s episode as per the Bravo synopsis, “after the blow up at Kyle’s gay mixer, the other women speculate about Brandi’s influence over Kim. The ladies attend Eileen’s movie premiere at a shopping center in the suburbs. Lisa Vanderpump is nervous when her son receives his genealogy test results. As Eileen brings the Richards sisters together to discuss their problems, Lisa Rinna questions Brandi about Kim’s recent behavior.”

Kyle cries to Kim asking if she is going to let Brandi come between them.  Brandi tells Kim she doesn’t think they should be there, asking her why she would want to stay here after Kyle yelled at her.

Kim says she doesn’t know what she’s done to Kyle, meanwhile Kyle is crying to Lisa Vanderpump about how mean Brandi is. Lisa tells her to do what she has done and not allow anything Brandi says to permeate because she knows what she’s like. Kyle says she visited Kim yesterday and everything was perfect. She says Brandi is not a good influence or friend to Kim.

She says in confessional she doesn’t understand how Kim doesn’t see what Brandi is doing coming between them. Brandi apologizes to Kim, saying she shouldn’t have come.

Eileen says she thought the pain medication was what caused Brandi’s issues at the poker party. Lisa Rinna says she real issue is that she’s an addict and everyone is trying to protect her. She says she needs help if she’s taking a pill she doesn’t know. “If I’m going to be honest, I would say everyone is enabling an addict,” she says.

Brandi and Kim storm off and are driven away. Brandi interviews a comedian from the Chelsea Lately show for her weekly podcast.

Eileen has invited everyone to the Burbank Film Festival to see a sci-fi film she is in.

Lisa Rinna asks what Brandi’s need is to do what she has been doing, reiterating that she needs to get help and get clean because she’s an addict. Kyle says she started to make excuses for her anger because she has been so hurt. Lisa Vanderpump says she sees other people who are happy and wants to ruin it.

Brandi says in confessional that she has no problem admitting when she’s wrong, but she’s never going to apologize to Kyle because she believes she is right in the situation.

Yolanda and Brandi do yoga together.  Yolanda says in confessional she needs a lifestyle change and that popping a Xanax will not solve her issues.

Pandora has convinced Lisa Vanderpump that they should take their Sur sangria and bottle it up to sell it on the market. She tells her about the genetic testing that Max wants to do. When Pandora asks if she wants another family coming into the picture, Lisa says she doesn’t even think they will and not to say that. Pandora starts crying, and Lisa tells her to be supportive of whatever he wants.

Yolanda says it’s so hard for her to hear people talking about her being aggressive, telling Brandi about the girls saying she’s an angry drunk. She tells Brandi to resolve to change.

Brandi says in confessional that makes her want to drink more because she doesn’t let people boss her around.

Yolanda says she just doesn’t want people to go around saying she’s an alcoholic, and that if she is one, she would want to help her get help. She says she would not be so successful at juggling the things in her life if she were an alcoholic, but Yolanda says she shouldn’t drink a little too much to where she is being aggressive. Brandi tells Yolanda that people are saying the same thing about her seventeen year old daughter, and Yolanda takes offense to this, saying Brandi is attacking her for trying to help.

Eileen has invited Kyle and Kim to lunch to offer her perspective given the recent losses of her sisters. She hopes to rekindle the sisters’ friendship from when they were girls. Kim says that even though she has been a good sister, there are things that she has done which continue to affect her. Kim says she feels so hurt by her, and Brandi says she feels like she’s always made out to be the bad sister because her intentions are misconstrued. She tells Kim that Brandi said no one likes her, not even her husband, which Kim claims not to have heard.

Lisa Rinna tells Brandi that the others are upset about her being so mean. Brandi says she’s a mama bear who is protective and that when she is attacked she goes for the jugular.

She says Kim came to her and told her she was her best friend, which makes her sad and puts a lot of pressure on her. She says it’s hard for her to try to change who she is but she also can’t let go of her. When Lisa asks if Kyle knows she’s in this kind of trouble, Brandi asks if anyone doesn’t know.

Brandi says that if anyone were to question Kim’s sobriety to her face, she would die.