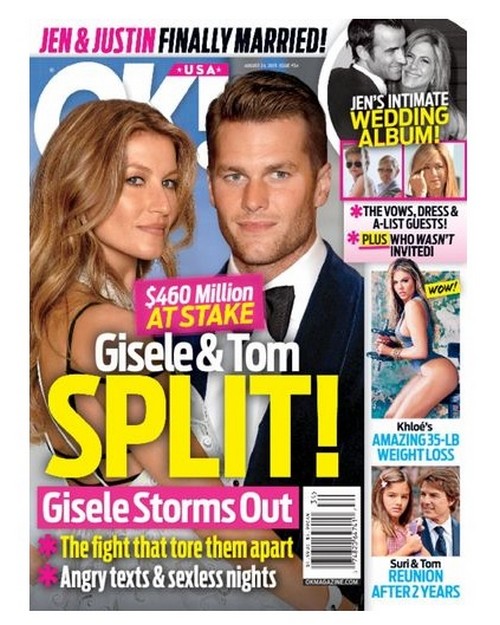 Will Gisele Bundchen and Tom Brady be the next celebrity couple to file for divorce this summer? The supermodel and her quarterback husband have reportedly split, and are in the midst of a messy $460 Million break-up, according to the cover of this week’s edition of OK! Magazine. The tabloid goes on to tease that Gisele “stormed out” after months of sexless nights and bitter fighting.

According to Gisele Bundchen’s Instagram account, she and Tom Brady are the picture perfect couple and their home life is a walk in the park. But, OK! Magazine’s insiders say that the happy family photos that Gisele is always posting online are just a charade, and the couple has been on the fritz for months. Tom Brady and Gisele Bundchen might be two of the hottest celebs in Hollywood, but for some reason they aren’t feeling very attracted to each other – their less than stellar sex life is reportedly one of the leading reasons behind their split.

An insider dished to OK! Magazine that aside from their sexless nights, Tom and Gisele can’t seem to see eye to eye on how they should be raising their two children. The source explained, “Tom has very different views on parenting than Gisele, and he has had it with the insane organic, GMO-free diet that she insists everyone in the house follows. She even makes Tom cook the childrens’ meals when she is not at home, despite the fact that they have a full-time staff. She doesn’t trust them to feed the kids, so Tom is cooking and cleaning. It’s crazy!”

The tabloid goes on to reveal that Gisele has threatened Tom that she will pack up the kids and move them to Brazil for a trial separation if he doesn’t put more effort in to their marriage. Apparently, the fact that he is currently smack dab in the middle of one of the biggest sandals to ever grace the NFL is no excuse for not being at his supermodel wife’s beck and call. Do you think that Tom and Gisele will be able to work out their differences? Or is there a divorce in their near future? Let us know what you think in the comments below!