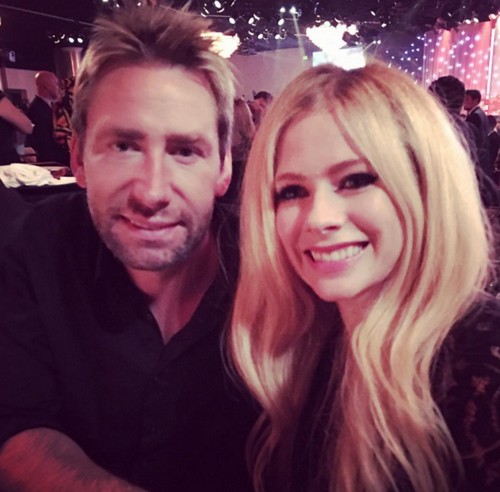 Avril Lavigne and Chad Kroeger’s divorce is off! Five months ago Avril and Chad announced they were filing for divorce after two years of marriage – however it looks like the couple has been working had on their relationship woes, and are in the process of getting back together.

Avril and Chad were spotted on Sunday February 14 at a pre-Grammy’s Party (coincidentally also on Valentine’s Day) and appearing very much like a happy couple.

In September 2015 Avril Lavigne announced on Instagram to her shocked fans that she and Chad were pulling the plug on their marriage and splitting. Since then, Chad Kroeger has been reportedly loving the single life, partying like the rockstar that he is, and Avril Lavigne has been keeping a pretty low profile.

It looks like Chad got all the partying out of his system though – and is ready to try and work on his marriage.

There have been whispers of sightings of Chad and Avril recently – and rumor had it they had reconciled. Around the holidays there were reports of the estranged husband and wife checking in to a hotel room together.

However, the rockers made it official on Valentine’s Day at Clive Davis’ Pre-Grammy Gala in Beverly Hills. Not only did the couple pose together for the cameras, but Avril actually posted some selfies of herself with her hubby Chad Kroeger on Instagram. Avril captioned the cute couple photo, “Grammy Party ….. Feeling great. Lovely night.”

It looks like Avril Lavigne and Chad Kroeger may have been one of the few Hollywood couples to actually work out their issues rather than going through with the divorce. What do you guys think, will Avril and Chad be able to make it work this time around? Or is a divorce inevitable for the rockers? Let us know what you think in the comments below!

Also at our dinner table was Gene and Paul from KISS along with Alice Cooper and Chad Kroeger. Quote by Alice Cooper tonight ” Think about the touring miles at this table alone ” #grammyparty