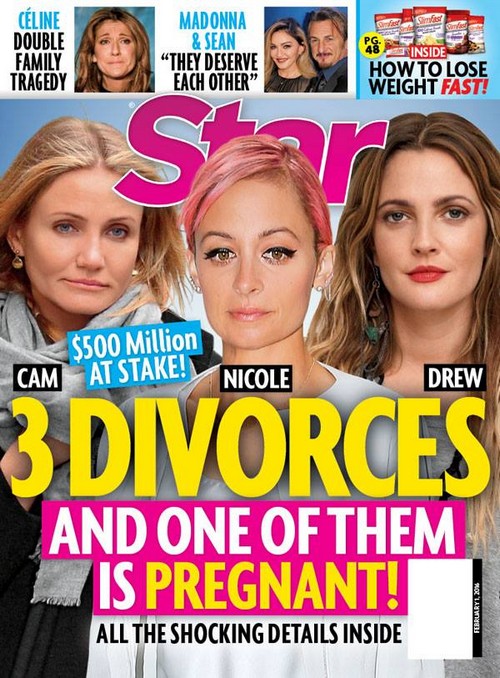 Are Drew Barrymore, Cameron Diaz and Nicole Richie all facing divorce? And one of them is pregnant on top of it? That’s a mouthful, now isn’t it? The current issue of Star magazine is reporting that the lovely ladies of Hollywood are all sharing more in common than one would really like, under these particular circumstances.

According to the report, Cameron Diaz, Nicole Richie, and Drew Barrymore are all heading for divorce and Drew is expecting another baby! I really hope you weren’t taking a sip of your drink just now, because if you were, you probably choked on it like I did while ready this story. That is a whole lot of lost love for one report.

According to the magazine, Cameron Diaz and Benji Madden and their “rush to the altar” just last year is the cause that “stopped the marriage in its tracks.” A source told Star, “I think they both realized they made a mistake.” They did rush into the marriage, but does that really mean that they have to rush right out of it?

They are reporting that Drew Barrymore and her husband, Will Kopelman are the worst off saying, “out of all three women, none is further down the road to divorce.” As far as Drew being pregnant, “If that turns out to be Will’s child, he’s determined to fight for it. Everyone’s wondering which she’ll announce first, her divorce or another pregnancy.” Oh em gee, that is a tough choice. Baby or divorce? What a mess!

And lastly we have the Nicole Richie and Joel Madden situation brewing in the report, where the magazine talks about Joel’s alleged history of cheating, “It’s bad enough with these cheating stories, but when he’s thousands of miles away in Australia [for ‘The Voice’ down under] while she’s stuck with the kids, she feels totally helpless.”

If these reported divorce stories come to fruition, one thing is for certain, Drew, Nicole, and Cameron will have a lot more in common and a very twisted support system in place. Let’s just cross our fingers that this all resolves itself and that these ladies can live happily in marital bliss in lieu of the whole divorce scenario.

What do you guys think? Are the girls headed to divorce court? Or will this all just blow over? Sound off in the comments below!