Days of Our Lives (DOOL) Spoilers: Joey Shot in Hostage Situation – Rushed to Hospital for Life or Death Surgery 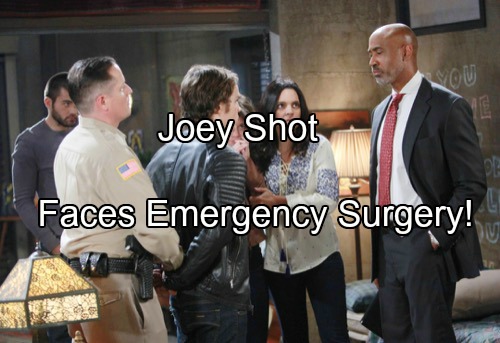 “Days of Our Lives” spoilers tease that Steve (Stephen Nichols), Kayla (Mary Beth Evans) and Joey (James Lastovic) will finally be ready to head back to Salem. Once Joey is released from jail, they’ll all just want to go home and put this nightmare behind them.

Unfortunately, things will get worse before they get better.

First, Kayla will give Steve and Joey a scare. Her brain injury is certainly something they’ll want to keep an eye on. After Kayla has recuperated enough to leave town, they’ll prepare to depart once again. The next delay will bring danger to this already stressed family.

DOOL viewers could tell that Dirk (Reiley McClendon) was going to be a problem from day one. He tried to lure Jade (Paige Searcy) away from Joey and he pressured both of them to join in the commune’s crime spree. However, we’re about to find out just how bad this bad boy is. “Days” spoilers say Jade will pass along some startling news to Joey.

It seems Dirk killed a cashier during a recent robbery. As Joey processes Jade’s updates, he’ll be thrown into peril. “Days of Our Lives” spoilers indicate that a hostage situation is about to go down at the commune. It sounds like Dirk will hold several people at gunpoint.

Naturally, Joey will get caught in the middle of all this. Steve and Kayla will also find themselves in harm’s way. At some point during the chaos, it appears Joey will take a bullet. He’ll be rushed to the hospital for emergency treatment.

Once the doctors check Joey out, they’ll quickly determine that he needs surgery immediately.

Joey’s life will hang in the balance.

Steve, Kayla and Jade will all await word on Joey’s condition. They’ll fear they could lose him. Luckily, James Lastovic is still taping at DOOL. Joey will survive his injuries and he may even bring his parents back together.

Soap couples tend to bond in times of crisis. As for Jade, she might realize just how much Joey means to her.

Stick with “Days of Our Lives” to watch the drama unfold.

So “Days” fans, what do you think about the hostage situation that’s coming up? Will the shooting force Steve and Kayla to lean on each other for support? Will it be Jade’s wakeup call about her deep affection for Joey?