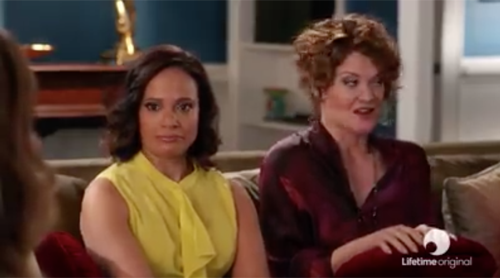 Tonight on Lifetime DEVIOUS MAIDS continues with an all-new Monday, June 27 season 4 episode 4 called, “Sweeping With the Enemy,” and we’ve got your DEVIOUS MAIDS recap down below! On tonight’s episode, Marisol must deal with a new roommate; an unexpected visitor has an impact on Daniela and Carmen’s relationship.

On the last episode, Genevieve took her war on Marisol to new heights; Carmen attempted to befriend Daniela; Zoila and Frances grew closer; and Evelyn’s plan for divorce was thwarted when Adrian cut off her funding. Did you watch last week’s episode?  We did and we recapped it right here for you.

On tonight’s episodes per  the Lifetime “Marisol must deal with a new roommate; an unexpected visitor has an impact on Daniela and Carmen’s relationship; Zoila’s set up on a blind date; and Genevieve meets a new friend. Meanwhile, Rosie’s suspicions of foul play continue to grow.”

Tonight’s episode is going to be another fun one, which you won’t want to miss. So be sure to tune in for our live coverage of Lifetime’s Devious Maids recap season 4 episode 4— tonight at 10PM EST! While you wait for the DEVIOUS MAIDS recap, share your comments about season 4 of Devious Maids below.

Tonight’s episode of Devious Maids kicks off in Danny’s bedroom, Carmen’s daughter is sleeping with Jesse. While they are rolling around in the bed they make a mutual decision to keep their relationship casual. During round two Danny gets a phone call, apparently she was chosen to sing in a showcase for agents and producers. Danny is thrilled and rushes downstairs to tell Carmen – she is shocked when she finds her mother (adopted mother) Josefina standing there, Carmen called Josefina and told her to come get Danny behind her back.

At Marisol’s house, her new roommate Evelyn is not thrilled by Marisol’s early go-getter attitude. Marisol is on the phone trying to get new gigs for her housekeepers, she has scored a meeting with Cece Shefield. Evelyn is whining about no one cooking her breakfast, Marisol loans her credit card to go get herself some breakfast.

Back at Evelyn’s house, Josefina, Carmen, and Danny are having a screaming match. Carmen is shocked when she hears that Danny dropped out of college to become a singer. Josefina shouts at Danny that she is done chasing her silly singing dream, before she winds up working as a maid like Carmen. Daniela stomps off – then Josefina turns on Carmen. She reminds her that she gave Daniela up and she has no say in her life.

Zoila shows up on Kyle’s doorstep and is thrilled to see that he is back home from his trip. Kyle is acting strange – he tells Zoila that things have “fizzled out” between them, and the “timing is off.” Zoila realizes that he is breaking up with her and is shocked. Then he gives her a candle that smells like juniper berries and tells Zoila that it is a “parting gift.” Awkward!

Genevieve is getting her hair fixed after her bleaching incident during her war with Marisol. Genevieve rambles to her new stylist about Zoila and how much she misses her. She whines that she and Rosie don’t have anything in common. She decides that she can start to try and be friends with Rosie, maybe she can be her new Zoila.

At Spence’s house, Rosie explains to Jesse that Cinnamon the stripper skipped town, now they are back to square one and don’t have an alibi for him. Shannon returns home, she has her arms full of bags of stuff she bought when she went shopping. Rosie points out that the money she got from Peri’s estate is supposed to be for Spence’s son Tucker, not for her to spend on zebra print lingerie.
Marisol returns home after a day of work and is shocked to see that Evelyn bought her all new furniture and drapes and sheets. Marisol freaks when she realizes that Evelyn bought them with her credit card. She says that everything has to go back NOW, she gives Evelyn some tough love and tells her that she is broke, and it is time for her to go get a job so she can support herself.

Rosie heads to the prison to visit Spence. She reveals that she thinks Shannon may have killed Peri for her money. Meanwhile, Spence is not doing so well – he’s freaking out. He cries to Rosie that a guy named “Kill Face” wants to have his way with him.

Zoila heads out to dinner with Kyle’s mom, they chat about their super awkward braek-up. Kyle’s mom wants to hook Zoila up with a newly single guy. ZOila is horrified when Adrian walks in, but luckily he says that he has never seen Zoila before and doesn’t blow up her fake rich identity.

The girls all head over to Marisol’s house for coffee – Evelyn crashes their coffee date, and wants to be one of the girls because she is poor now too. Marisol basically kicks her out and tells her to go meet with a career counselor and start looking for a job. When no one is looking, Evelyn steals another one of Marisol’s credit cards.

Rosie decides to snoop around Spence’s house to find some dirt on Shannon. Shannon comes home early and Rosie hides under her bed. Rosie gets stuck under the bed while Shannon and Ben have sex on top of it.

Josefina tries to take Daniela home – Carmen feels guilty and locks Josefina in a closet so that Daniela can sing in the showcase. Adrian lets Josefina out of the closet and she rushes to the showcase, but Daniela is already on the stage. Carmen is blown away by her daughter singing, but Josefina just sits on her phone and can’t wait to leave.

Evelyn is out trying to shop with Marisol’s credit card. She gets in an argument with a cashier because her name is not on the card and winds up arrested.

Meanwhile, Kyle’s mom Frances set up a super awkward date between Zoila and Adrian. Zoila is appalled when Adrian says that she acts like his wife Evelyn.
Genevieve is trying hard to be Rosie’s friend. She sets up a dinner date with Rosie, but Rosie shows up late because she was trapped under Shannon’s bed. When Rosie finally arrives, Genevieve tells her that she doesn’t want to be friends with her anymore, she found a new friend, her hairstylist.
Marisol bails Evelyn out at the police station. Evelyn has hit a new low, she breaks down and says that she has $2.07 to her name and she is going back to Adrian. Marisol won’t let her – she says that she will help her figure something out.
Daniela heads home and has Jesse over for “goodbye sex.” She says that she nailed her audition and no one cared, none of the producers even talked to her. She’s going home with her mom tomorrow. Jesse tells her that he doesn’t want her to leave – and he doesn’t think that she should give up her dreams.

Adrian drives ZOila back to her fake house, he says that he wants to go out with her again and it turns him on that she is repulsed by him. He plants a sloppy kiss on a mortified Zoila, and Kyle and his mom Frances watch from the window.

Frances is thrilled that they hit it off, Kyle on the other hand is not impressed.
Marisol meets up with a potential client named Cece, she is trying to get a maid in to Cece’s house. Cece doesn’t want to hire a maid, she says that she doesn’t want strangers in the house. Evelyn interrupts their meeting and convinces Cece to hire one of Marisol’s maid. Evelyn says she just wanted to repay her for all of her help. Marisol is impressed and she offers her a job.

Carmen and Josefina are fighing over whether or not Danny will go home. Josefina screams that she is Danny’s mother, and Carmen shouts back that she is the one that gave birth to her. Danny overhears their entire argument and is shocked, she runs out of the house.

Rosie heads to the prison to talk to Spence, she tells him about Shannon and Ben sleeping together – then Spence grabs his chest and says he can’t breathe and falls out of his chair.