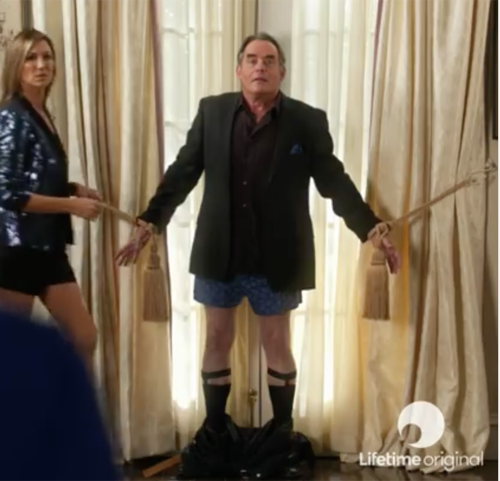 Tonight on Lifetime DEVIOUS MAIDS continues with an all new Monday, August 1 season 4 episode 9 called, “Much Ado About Buffing,” and we’ve got your Devious Maids recap down below! On tonight’s episode Marisol (Ana Ortiz) uncovers a secret from Genevieve’s (Susan Lucci) past that could reveal Peri’s (Mariana Klaveno) killer.

On the last episode, Carmen’s caught in the middle of the Powell household; Genevieve meddled with Marisol’s love life. Did you watch last week’s episode?  We’ve got a your Devious Maids recap right here for you.

On tonight’s episodes per the Lifetime synopsis, “Marisol uncovers a secret from Genevieve’s past that could reveal Peri’s killer; Zoila struggles to balance work and her personal life while helping Rosie investigate; Danni pretends to warm up to Carmen; and Spence helps Rosie with Miguel’s bad behavior at school.”

Tonight’s episode is going to be another fun one, which you won’t want to miss. So be sure to tune in for our live Devious Maids recap— tonight at 10PM EST! While you wait for the episode, share your comments about season 4 of Devious Maids below.

Tonight’s episode of Devious Maids kicks off with Kyle showing up at Zoila’s doorstep. Zoila doesn’t let him in because her boss Fiona just came home, and he’ll figure out that she is just a maid and not rich. Fiona and Ziola are already bumping heads, Fiona wants Zoila to wear a maid’s uniform and suspects that she was wearing her clothes.

At Adrian and Evelyn’s, Danni and Carmen share a moment. Danni tells her that she forgives her and wants to start over. Danni doesn’t want to fight with Carmen anymore. Carmen is thrilled, and she has no idea that Danni lied about Lucas being dead.

Rosie gets a phone call from Miguel’s school – he has been suspended. Apparently, Miguel threatened his teacher and said that his step-dad is a murderer and he better give him an “A.” Rosie is freaked out, she thinks that Miguel wants to be a criminal like Spence. Genevieve says that she should take Miguel to prison to visit Spence so that he sees what prison is really like and that he doesn’t want to end up there.

Marisol shows up at Peter’s office, apparently he has been avoiding her phone calls. His secretary Derek says that Peter went to Hawaii, Marisol can tell that Derek is lying. Derek scoffs that Peter doesn’t date people that cheat on him, and then leaves Marisol standing there stunned.

Marisol meets up with Zoila and Rosie for lunch. Rosie and Zoila are planning on breaking in to Kyle and Frances’ house to steal a video of Peri that they think may prove that Ben killed her. Carmen arrives late, she is excited to have an audition at Marisol’s movie. She brought along the script – Zoila is furious when she realizes that they are making her character elderly.

Adrian meets with his private investigator. He’s upset to learn that there is nothing shady about Evelyn’s new boyfriend Reverend James. Apparently, the investigator sat in on one of James’ sermons and now he is a believer, he tells Adrian that Evelyn is a lucky woman to have found him.

Rosie heads to the prison for her conjugal visit with Peter. She reveals that she is worried about Miguel, she wants to bring him by the prison. Spence says that they have a program for Troubled Youth – basically “Scared Straight.”

Genevieve is hosting a book club meeting, her boozy pal Gail is there and is still trying to seduce Adrian. Genevieve gives her advice and tells Gail she should look in to S&M because Adrian has some fetishes. Marisol barges in and interrupts, she found out that Genevieve is the one that told Peter about her fling with Jesse. Marisol growls that Marisol is a “ruthless bitch” and she will be alone for the rest of her life.

Miguel heads to the prison to spend the day with Spence. Spence learns that Miguel’s acting out has nothing to do with him going to jail. It’s actually because Miguel is upset that Rosie has been ignoring him lately because she is so worried about proving Spence is innocent.

Zoila sneaks away from Fiona and breaks in to Kyle’s house while he is at dinner with Frances. She scopes out the attic and opens the day bed where Ben’s body used to be hiden, but it is gone. All of the cupboards and chests are locked. While she is snooping around, Kyle and his mom come home. Zoila rushes downstairs and pretends to be dressed in a sexy maid costume to surprise Kyle. Of course, his mom Frances is horrified as Zoila runs out of the house.

Evelyn finds Marisol eating Chinese takeout in the middle of the night. She joins her and they discuss their man problems. Evelyn confesses that Reverend James is “too nice” for her, and their relationship is kind of dull. Evelyn thinks that Jesse is the perfect guy for her, and she should be thrilled that he was even interested in her. Marisol doesn’t want to hear it…she misses Peter.

Carmen heads to her big audition, she is shocked to see Danni there auditioning for the same part. Danni rattles Carmen and taunts her and reveals that she was just hanging out with her to study her for the part. Carmen is so upset that she bombs the audition.

Frances barges in to Zoila’s house and demands to know why she is still seeing Kyle. Fiona hears them arguing and blows up Zoila’s secret. Frances realizes that Zoila doesn’t own the house, she is just the maid. She rushes off to tell Kyle what Zoila has been hiding.

Gail stops by Adrian’s house to seduce him. She ties him to the curtains and starts stripping off his clothes. Adrian is horrified and calls her a lunatic, then Evelyn walks in to find Adrian tied to the curtains with his pants down. She storms off, and Adrian shouts for her to come back…but he’s sstill tied up. Adrian realizes that Evelyn is jealous of him and Gail, and he might be able to get her back after all.

Zoila heads over to Kyle’s house to try and clear the air. He’s upset she kept a secret from him, but Zoila points out that he kept a secret too – Zoila reveals that she knows all about The Circle. Kyle scoffs that it is not a cult. Zoila shouts at Kyle that he is delusional and his mother is framing Spence for Peri’s mother. Zoila begs Kyle to get the video of Peri proving it.

Kyle heads upstairs and confronts his mother – he tells her that Zoila says Spence is innocent. Kyle is starting to put the pieces together, and realizes that his mother is hiding things from him. Frances tells Kyle that ZOila has infiltrated The Circle and they are in jeopardy.

Carmen tries to make amends with Danni, Danni rubs it in her face that she got a callback to the movie. Carmen isn’t upset, she’s happy for Danni. She even gives her advice on what to wear to her next audition – it looks like Danni might be starting to feel a little guilty.

In the morning Zoila wakes up and learns that there were moving trucks at Kyle’s house. She rushes across the street and everything is gone, they moved out in the middle of the night. She calls Rosie and tells her the bad news. Kyle and Frances are gone, and they took the evidence that they needed to clear Spence’s name with them. Rosie heads to the prison and tells Spence the bad news. After Rosie leaves, Spence’s cellmate “Kill Face” reveals that he is digging out, and the hole in the prison is almost done…he invites Spence to escape with him.

Evelyn heads out to dinner with Reverend James, she tells him all about catching Adrian with Gail. James is upset, he says that he can tell that Evelyn’s marriage is far from over and she is still worried about Adrian, so he dumped her.

Genevieve and Marisol have a heart to heart. They talk about cheating, and Genevieve opens up about her “affair” when she was married to Peter. She reveals that she didn’t mean to cheat, and she was drugged at a party and blacked out, she woke up in bed with Hugh Metzgor…a movie director that Peter worked with. Meanwhile, Carmen’s daughter Danni is on her way to a private callback with Hugh…