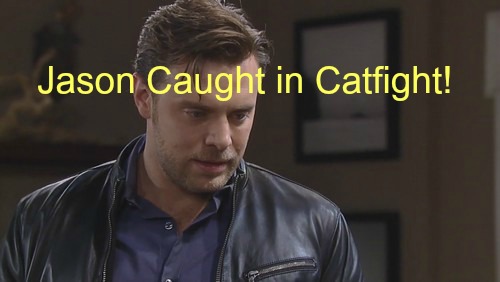 “General Hospital” (GH) spoilers reveal that more drama is coming for Sam Morgan (Kelly Monaco), Liz Webber (Rebecca Herbst) and Jason Morgan (Billy Miller). This will all be about the happenings at the Webber house and who’s to blame for scaring Liz and her kids.

Sam’s not happy that Liz is staying at the MetroCourt in proximity to Jason – although she’s not in the same room as her former fiancé – and wants to sort it out ASAP so she can get Jason away from Liz. Thing is, Liz doesn’t want Sam involved.

GH spoilers indicate that Jake Spencer (James Nigbor) may accuse Sam of breaking the photo at the house and making the trouble to make her look bad to Jason. Jake doesn’t like his dad’s growing closeness with Sam and wants to shut it down.

Jason will explain to Sam that he’s got Liz and Jake near him at the hotel because he’s worried about his past or the Cassadines being responsible for the scares at Liz’s house. Sam agrees to help out and investigate the goings on despite Liz’s protests.

In fact, Liz not wanting Sam there is a red flag to Sam that Liz herself may be involved in the shenanigans. Sam is never one to hold back, particularly when it comes to Liz. Sam will accuse Liz of setting up the incidents to keep Jason around.

Liz will blow up at the accusation because Sam is essentially accusing her of scaring her son Jake to keep Jason around. Liz would never scare her kid like that and is offended that Sam thinks she would stoop to that level.

That leaves Jason once again stuck between the women. Last time he was in this situation, he wanted to believe Liz and bet on the wrong pony because Sam was the one telling the truth. This time, though, Sam is in the wrong and Liz is not lying.

But it does look like Sam was right that the trouble was coming from within the home – but it was likely Jake, not Liz who was setting the stage to reunite his parents. Liz will soon know this thanks to Jake’s upcoming shrink visit.

The bottom line is that Sam and Liz have to learn to co-exist. If they keep up with their incessant bickering, they may drive Jason away from them both. It seems like Jason is good one on one with Liz, who is trying to behave better and be honest.

And Jason and Sam are fine one on one as they continue to grow closer. But Liz and Sam are oil and water. Since both are raising Jason’s sons – brothers that need a relationship – this will be an ongoing problem.

GH spoilers hint that Jason will recover a significant memory this week – but what will it be about? Is it of life with Sam? With Liz? With his family? And how will it impact Jason as he tries to carve out a new life for himself?

Check back with CDL often for more “General Hospital” spoilers, news and updates.