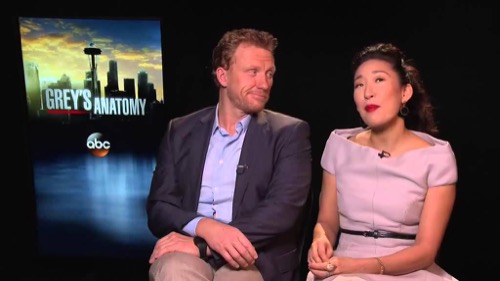 Grey’s Anatomy Season 13 will bring a reunion between former Sandra Oh who played Cristina and Owen, played by actor Kevin McKidd. Exactly how they will reunite remains to be seen. Sandra Oh tweeted photos of her Grey’s Anatomy hubby on Friday, teasing fans with: “And wait- my TV husband has a new TV wife??” She captioned one of the pics. “Xqueez me? I don’t think so, Ha! Owen what r u thinking??”

We wonder how Cristina feels about Owen’s marriage. Is she jealous? What will bring her back to the show? Oh left so much unsaid in her tweet. Of course she’s jealous bout Kevin McKidd’s character moving on!

As if the medical backdrop doesn’t bring on the drama, Grey’s Anatomy lays on the commotion with all the romance subplots and suspense. You need an anti-anxiety pill just to get through an episode.

If you’ve been following the ABC medical drama Grey’s Anatomy for the past 12 seasons, you already know the suspense surrounding Amelia and Owen’s wedding. During the Grey’s Anatomy Season 12 finale, Amelia had doubts about marrying Cristina’s hubby, Owen before the ceremony.

And wait – my TV husband has a new TV wife?? Xqueez me? I don’t think so, Ha! Owen what r u thinking?? pic.twitter.com/qfxwyKCbQV

Owen, too, got cold feet. Amelia does make it to the altar. However, the latest season of Grey’s Anatomy ends without the audience knowing whether Owen went through with his vows or not. So unfair, Oh, for you to be so #hush-hush. You have to share more with us!

In another tweet, she fully supported her TV hubby’s new on-screen love: “So much love 2 @caterinatweets Yay Canada. But he’s Myyy Tv hubby! 2 Owen & Amelia.” She added a wink face and heart emoji. ‘he’s Myyy Tv hubby!?’ Oh might support the on-screen romance, but what about Cristina? Oh ultimately doesn’t give anything away about how the wedding ceremony will end. Does Owen say “I do” or not?

We can only speculate what the next season of Grey’s Anatomy will bring. Will Cristina and Owen really get back together? What will happen to Amelia if Owen does take his vows? And what if he doesn’t? Will Cristina rush in and stop the wedding? Ooh! So much to look forward to!

Too bad we’ll have to wait until the fall 2016 to find out. Come back to CDL for all your Grey’s Anatomy spoilers, recaps, and news!