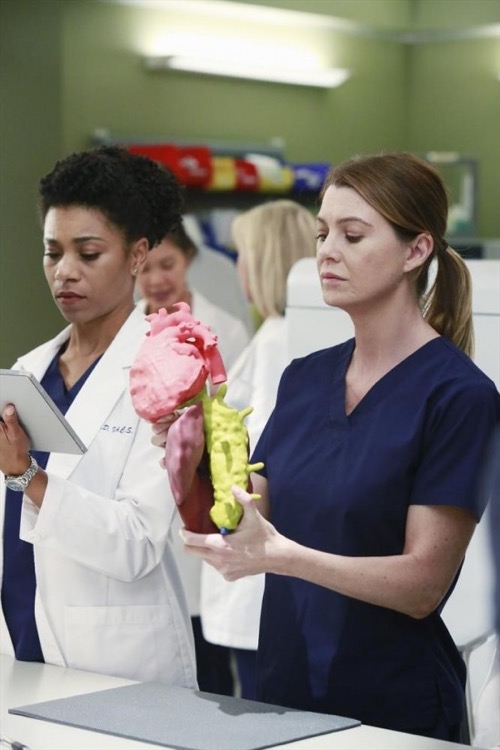 Tonight on ABC Grey’s Anatomy returns with a great all new Thursday February 5, season 11 episode 10 titled “The Bed’s Too Big Without You,” and we have your weekly recap below. On tonight’s episode, April and Jackson’s baby undergoes testing. Meanwhile, Dr. Herman instructs others in fetal surgery; Owen [Kevin McKidd] and Callie [Sara Ramirez] support one another as they ponder reentering the dating world; and a 3-D printer gives the doctors insight into a patient’s tumor.

On the last episode, Maggie and Meredith disagrede with Derek about the best way to approach a patient’s case, which lead to a bigger argument between the couple. Meanwhile, Callie felt responsible when one of her veterans was pushed too far and one doctor’s routine procedure resulted in a devastating diagnosis, on the winter finale. Did you watch the last episode? If you missed it, we have a full and detailed recap right here for you.

On tonight’s episode as per the ABC synopsis, “April stays optimistic as Arizona begins testing on her baby; Dr. Herman plans out a crash course in fetal surgery; and Owen and Callie encourage each other to get back into the dating scene. Meanwhile, Meredith, Maggie and Bailey use the 3D printer to gain a better understanding of their patient’s tumor.”

This episode looks like it is going to be a great episode and you won’t want to miss it, so be sure to tune in for our live coverage of ABC’s “Grey’s Anatomy” Season 11 episode 10 at 9 PM EST!

Meredith has funnily enough run out of people on tonight’s episode of “Grey’s Anatomy”. It seems that with both Cristina and Derek gone – Meredith doesn’t know who to turn to when she needs she talk. And, typically, Meredith would have tried to lean on Alex but occasionally he is busy living his own life. So, left with no alternatives and needing someone to during her upcoming surgery, she decided on roping in Bailey.

However, Meredith never got that chance she wanted to talk because the surgery that was supposed to an easy one ended up being one of the toughest cases she’s ever seen. Their patient has tumor and yet it had grown so exponentially that the scan Meredith and Bailey were using prior to surgery was actually outdated by time they had opened her up. And so they had to call a halt right then and there.

No doctor is allowed to operate blindly and that’s what was happening. But, later, they kept on trying to get a clear scan of what the tumor currently looks like and they weren’t getting anywhere with their traditional methods. So they decided to use the 3D printer.

Maggie had been brought in on the case because the tumor looked like it could be affecting their patient’s heart. Though, when it came time to do the scan, Maggie was just as stuck as the rest of them. And all three doctors had to wait a full ten hours before they could get a printed version of the tumor.

And speaking of being stuck, there was Amelia. She figured out how she wanted to do the surgery on Dr. Herman and she was kind of having a hard time convincing everyone else that she knew what she was doing. Even, as she was using the case to teach the younger ones; they didn’t hold back as to wondering why she was so confident about her capabilities. Yet, it didn’t help that the loudest naysayer also happened to Dr. Herman.

Herman is already preparing for her eventual death and she’s been teaching Arizona everything she knows in a crash course. She gathered all of the toughest neonatal cases and she was going to fit them all in while she was still herself.

But, with every case she could take on, there were cases Herman couldn’t touch. So she told Amelia that if her surgery fails – there was going to be a bunch of dead babies and it would be all her fault.

And, hopefully, one of those cases she had to omit until she was better is not April and Jackson’s baby. The two of them had recently gotten a more in-depth scan and testing in order to find out which version of the disease their son has. Their unborn child could either have surgeries throughout his life or he could never live to see his second birthday.

With those particular odds being so dire, Jackson was trying talk to April into possibly considering a termination. Though April, for her part, isn’t sure she would want that option. So she called her mother and instead of helping her daughter – April’s mother ended up having a very firm opinion of her own.

Apparently, April’s mother and now family pastor is taking the religious view. It’s in their opinion that April shouldn’t go through with an abortion. And that April shouldn’t even have bothered finding out which version of the disease her son had. According to mom, that’s only going to unnecessarily stress out April.

Yet, the only thing that has managed to stress April was having to watch her husband and mother go at it. It made her feel like no wanted to know what she wanted. They simply wanted her to choose their decision.

And the sad part is – the test results came back and they weren’t good.

Back at the hospital, Meredith, Bailey, and Maggie went back for a second round with the tumor (this time knowing more about it thanks to the scan) and they were able to safely remove it. All of it and not just parts. Earlier, Bailey had nicknamed the tumor Cyclops and it really was a gigantic monster. But the doctors won at the end of the day. And later Meredith called up Maggie to talk to.