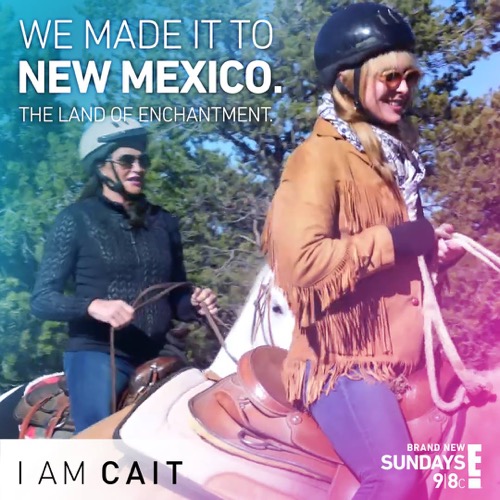 I Am Cait continues tonight an all new Sunday, March 13 season 2 episode 2 called “Woman of the Year?” and we’ve got your recap down below! On tonight’s episode, after a political fight on the bus gets heated, the women decide to confront Cait on her aggressive debating style and suggest a more feminine approach.

On the last episode, Cait and her friends embark on an epic cross-country road trip in a tour bus, at which point the opportunity presents itself for the women to corner Cait about her sexual orientation and her politics. Did you watch the last episode? If you missed it, we have a full and detailed recap right here for you.

On tonight’s episode as per the E! synopsis “the political conversation on the bus that was started in last week’s premiere. Caitlyn says that she thinks Donald Trump would be great for women’s issues. Bless Jenny Boylan for saying out loud, “Kill me now.” When Candis tries to convince Caitlyn that Hillary Clinton is an amazing woman who’s accomplished a lot, Caitlyn starts yelling over her and goes on a rant about how lousy Hillary is.”

Tonight is going to be a crazy series that you won’t want to miss, so be sure to tune in for our live coverage of E!’s “I Am Cait” tonight at 9PM EST! Meanwhile, while you wait for our recap hit the comments and let us know how excited you are about I Am Cait coming back for its second season.

This week on I am Cait the bus trip to San Francisco continues. The bus pulls into New Mexico and everyone is resting. Ella says “It frustrates me sometimes, but I realize that we have a lot of differences.” Candis is excited because “Since I turned 18 I have learned so much from the older women.” The women are frustrated and want to get off the bus and start complaining about the smell in the bathroom. Ellen asks Courtney “Is it still ok to use the word tranny or is it offensive?” A debate about the word tranny ensues and Jenny equates using the word tranny to using the N word to a black person or the F word to a gay man. Kate asks Jenny if she had ever been hurt and Jenny relays a story about how someone grabbed her by the neck and dragged her around for a half an hour and then dropped her. Caitlyn is happy that this debate is taking place because she hasn’t really dealt with this issue before.

The discussion rages on and Kate and Jenny both have very differing viewpoints. Where Jenny feels that the word is derogatory and offensive, Kate decides to embrace the word and she says “I don’t identify as a man or a woman. I call myself a tranny,” Kate says “For the first twenty years that I identified as transgender I was looked at with scorn and ridicule. I am still looked at that way now and it especially hurts when it comes from the LGBT community.”

Caitlyn gets a call from her mother and she tells the other women “My mother called me to tell me how much she is starting to appreciate Donald Trump.” Candis asks “Hilary Clinton or Donald Trump.” Cait says “Hands down Donald Trump. If Hilary wins we won’t have a country anymore.” The argument heats up as Cait tries to defend her position by calling Hilary Clinton “A political hack and a liar.” All of the women get up and leave the room. Candis says “When it comes to debating politics with Caitlyn it is not a debate. She just yells at us and it is very intimidating.”

Candis tells the group that she got into a screaming match with Caitlyn about politics. Candis feels that Caitlyn has some serious anger . Candis tells her “While I appreciate a good debate I don’t want to engage with someone who raises their voice. Caitlyn once again argues and things get heated. Candis tells her that “I am not going to engage with someone who is going to interrupt me.” She also tells Caitlyn that “I don’t feel safe to disagree with you.” Caitlyn tells Candis “I appreciate your honesty and candor and you have calmed me down.”

When the bus arrives in Sante Fe they immediately check in to the hotel. Caitlyn calls for Candis who does not respond to her. Candis is upset and frustrated. Zackery says “When politics came up for the second time things got pretty intense.” When everyone sits down to dinner there is a lot of tension. Jenny says a simple prayer. Caitlyn says “I love talking about politics, but maybe we should change the subject.” She then tells them that she is getting ready to accept Glamour Magazine’s woman of the year and she asks them what their definition of a strong woman is. She gets a bunch of different answers.

Caitlyn tells them that she is having trouble “grasping what it is to be a female.” Jenny talks about her coming out experience. She says “I waited until after my dad died and came out to my mom.” She says that her mother told her to leave and that if she went through with the transition to female that she needn’t bother to come back.” She then tells the group that they didn’t talk for three months and when they did her mother still wouldn’t acknowledge her as female. Finally her mom called her and addressed her as Kate. Jenny says that “My mother always told me that you can’t hate someone whose story you know. Although Kate and I have differing views we need to come together to help better the community.”

The next day the group heads off to ride horses. Chandi admits to never having ridden a horse and the group laughs about “devirginizing Chandi”. While on the bus heading for the horseback ride they decide to play “Fluffy Bunny” to lighten the mood. When they get to the horseback riding everyone is enjoying the event except Chandi, who seems to be having trouble with her horse. Caitlyn and the group are having fun. Zackary says that “We need to come together, because while the trip has been fun, Caitlyn has become a bit of a bully.”

When they get back to the hotel they toast to Caitlyn getting her award. Kate addresses the group and tells them how she and Jenny came to a mutual understanding and managed to work out a compromise. She then turns to Caitlyn and tells her that “I want to know more about how you think and what you feel.” She tells her that she hears Caitlyn’s passion as anger. Jenny tells Caitlyn ” I want you to hear that we were scared.” Caitlyn says “ I see the issues differently.” Jenny tells her “It’s not about the issues, we were genuinely scared.” Caitlyn is stunned into silence. Candis says “For me it was the fact that you weren’t listening to me.” Caitlyn admits that she did become aggressive in the discussions and that she needs to work on her listening capabilities. Candis says that “Our community is always prone to infighting and division and we have to feel safe to come to each other and express our differing views.” Caitlyn apologizes to Candis about the argument regarding Hilary Clinton and she says “I may even take a picture with her.” Candis laughs and accepts her apology.

The groups hops off the bus to meet the mayor of Sante Fe. They passed an ordiance that made for gender neutral bathroom. Kate thanks the mayor for giving her a “place to pee.” The mayor tells her that they are going to change the sign and Caitlyn has arranged for Kate to change the sign on the bathroom door. Kate says “In addition to feeling safe this makes me feel included.