So You Think You Can Dance Premiere Recap – Former Dance Moms Kid Auditions: Season 13 Episode 1 “The Next Generation: Auditions #1”

BY Stormy Elizabeth on May 31, 2016 | Comments: one comment
Related : Reality TV, Recap, So You Think You Can Dance, Television, TV 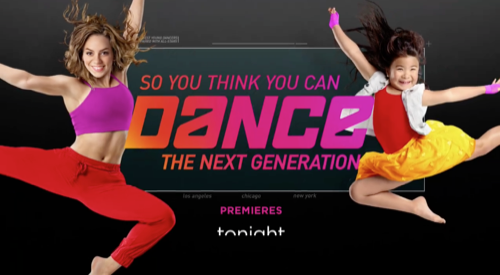 Tonight on FOX, So You Think You Can Dance continues with an all new Monday, May 30 season 13 premiere called “The Next Generation: Auditions #1,” and we’ve got your recap down below. On tonight’s episode, the 13th season begins and features contestants between the ages of 8 and 13. Teen dancer Maddie Ziegler joins the panel of judges.

This season’s dancers between the ages of 8-13, who are skilled in various dance styles, such as contemporary, tap, hip-hop, ballroom, animation or breaking, will be paired up with All-Stars to compete.

On tonight’s show as per the FOX synopsis, “the Emmy Award-winning dance competition returns with an all-new format! After twelve seasons showcasing the most talented dancers in the nation, it’s time to see what America’s youngest dancers can do. Season Thirteen will feature the best of the best from ages eight to thirteen and as the competition heats up, each dancer will work alongside an All-Star favorite from the past. See which young dancers have what it takes to become America’s Favorite Dancer.”

The premiere episode of So You Think You Can Dance season 13 airs tonight at 8PM and you don’t want to miss it. Celeb Dirty Laundry will be live blogging the show, so don’t forget to come back to this spot at 8PM EST for our live recap!

#SYTYCD tonight is the new season for just kids age 8 to 13. Tonight’s auditions were in LA. Paul Abdul, Jason Derulo, and Nigel Lythgoe will select kids to move on to a dance academy. Merrick is up first and he’s from Cardiff-by-the-Sea, California.

He heads to the stage and he’s got his family there. He says he’s going to do hip-hop freestyle and says he’s been dancing for two years and started classes a year ago. He’s pretty amazing and does these full body jitters that stun the judges and crowd.

All three judges are on their feet clapping when he’s done. Nigel says it was ridiculous. Paul says he’s incredible and fluid. Jason says it shocked them all. All three judges say yes and he scores the first ticket to the academy.

Avery is next and she’s 11 and a ballet dancer. Her mom teases her about her imaginary alter ego. Her dance is amazing and the judges are again all three on their feet. Nigel says she’s so mature in her movement and says it’s beautiful to watch.

Nigel says she’s got a big career ahead. Paula says she exudes so much emotion and is way beyond her years. Jason says he can’t wait to see her work with an all-star later and she also gets a ticket to the academy.

Next is Kida who is 13 and brought his whole family. He says his brother taught him how to dance and talks about losing his dad to a really bad flu a few years ago and is upset because his dad’s birthday is today. He says his family has to stay strong.

Kida dances and does a really cool hip-hop number. Again all the judges are on their feet. Nigel says he didn’t expect him to be that good and Jason says his musicality is well beyond his years. Paul says he’s magical and seamless. He also gets an academy ticket.

We see a montage of other auditions including a handful of refusals. The judges are nice to all the kids, though, and encourage them to keep on dancing. Next is Lev, who’s 10, and talks about being Russian but born in France. He loves ballroom dancing.

He has Sofia, his dance partner, with him but she’s too young to audition but will get to dance with him for his audition. He says the kids at school laugh at him for dancing and that makes him sad. Lev’s mom says she’s really proud of her son.

They dance to Uptown Funk. The crowd loves them and the judges stand to applaud the tiny couple. Nigel says he’s the first young ballroom dancer that has good facial expressions. Jason says he’s never seen a little kid dance like that.

Jason says when he slowed down he nailed it and made the chorus better. Paula says he’s one of a kind and she can tell he loves what he does. They all say yes and he gets his dance academy ticket. Lev says Sofia is the best partner.

Ivan and Camila are also ballroom dancers but their respective partners couldn’t come to auditions. Camila gets her ticket even though she went solo. Ivan’s mom steps up to dance with him. Jason loved him too and he even managed to dip his mom. He gets a ticket too.

Next is Ava Cota who is from Dance Moms! She’s the daughter of Jeanette who is one of Abby’s rivals on the Lifetime show. That would be odd to have her on the show since Maddie Ziegerl is one of the featured judges this season. Her mom Jeanette is there at the audition.

She gets applaud but no standing o’s from the judges. Paula says she’s a beautiful dancer and says she was told she was too short to dance and asks if Ava had the same experience. She says she was kicked off a team for being too tall and has been attacked on social media for her height and weight.

Jason says it’s hard to be in the spotlight and says it happens at every level. Nigel says she’s brilliant and she gets three yesses and gets her ticket to the dance academy. There are more contemporary dancers that also got tickets from the judges in a montage we see.

Next are some tap dancers and a montage of embarrassing parents. Ava, age 11, takes the stage and does her tap routine. Nigel says she has great ankles. She gets a stand up from the judges. Nigel says that type of jazz type is beautiful and calls it great tap work.

Paula says every beat is on point and she’s very agile. Jason says the piano was going so fast and she brought in new rhythm and says it’s next level. She gets three yesses and is handed a ticket to the SYTYCD academy.

Next is a duo of Stella and Geramy. They are doing ballroom. Stella is the better of the two. Nigel says Geramy wasn’t strong enough. Stella freaks and says she’s been practicing for months and Geramy lost 25 pounds the past few months to be here  – she asks for 20 more seconds to show them more.

The judges relent and tell them yes. Nigel thanks her for being brave enough to ask. They get their shot and it was better. Jason says if he had to decide, he would tell Stella yes and Geramy no this time. Paul says his determination is commendable.

Paula says she thinks Stella could be a professional dancer and agrees with Jason. Nigel says she’s going through to the academy then Nigel says he can tell Geramy worked hard and says he thinks getting him to the academy would be a good thing for him. They end up sending both.