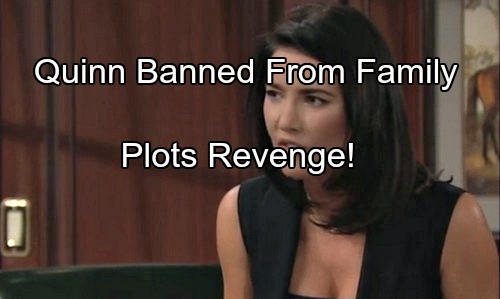 The Bold and the Beautiful (B&B) spoilers for Monday, July 18, tease that Steffy (Jacqueline MacInnes Wood) will unleash her wrath. She’s tired of Quinn’s (Rena Sofer) meddling, but her mother-in-law just doesn’t get the picture. Steffy will try to make sure her feelings are crystal clear this time. She’s officially DONE.

Steffy will insist that Quinn is never going to have a relationship with her or the Forresters. She’ll contend that any hope Quinn might’ve had about being part of the family is gone. Much to Quinn’s dismay, Eric (John McCook) will back Steffy up. He’ll urge Quinn to butt out and leave Steffy alone.

Of course, Eric is secretly growing quite fond of Quinn. He wants her in his life, but he has to act outraged or Steffy could be tipped off. Quinn probably won’t be happy about it, but she won’t give up. Despite Steffy’s intense hatred, Quinn thinks Eric is the key to turning this situation around.

Meanwhile, Liam (Scott Clifton) and Wyatt (Darin Brooks) will continue their argument about Quinn. Wyatt believes everything will be fine. Quinn will do her thing and he can enjoy his life with Steffy. Liam will suggest that it’s just wishful thinking on Wyatt’s part. He knows Quinn will inevitably cause more trouble. 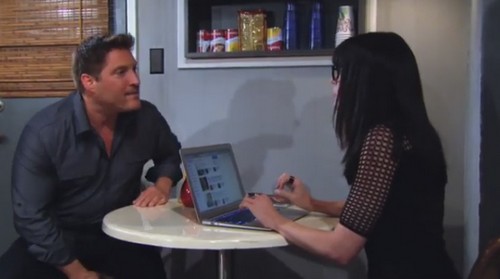 The Bold and the Beautiful spoilers say Liam will point out that Quinn won’t like being pushed away. He’ll wonder what Quinn will do in retaliation if Steffy keeps running the show. Quinn is used to being very involved in Wyatt’s life. The fact that she can’t even enter her son’s home anymore is a real issue.

Nevertheless, Wyatt will think he has all of this under control. That’s Wyatt for you – Mr. Optimism! He always lives in denial until things fall apart. Wyatt is certain that Steffy is completely devoted to him. Steffy cares about Wyatt, but a piece of her heart will belong to Liam forever.

Her feelings for Liam will likely become even stronger soon.

B&B spoilers indicate that Steffy will share a conversation with Liam about the upcoming event in Monaco. Steffy will suspect that Liam isn’t looking forward to the Spencer Summit. Liam will admit that he thinks it’s going to be awkward. He may mention that he’s not up for being a third wheel.

It’s not like Bill (Don Diamont) values Liam’s input anyway. Steffy will assure Liam that he’s needed. Even though they aren’t involved romantically at the moment, Steffy doesn’t want to lose Liam as a friend.

Deep down, Steffy actually seems to want more than that. She just isn’t willing to turn her life upside down to be with the man she desires. That could change if Quinn starts pulling additional stunts. Steffy may become so fed up that she dumps Wyatt because of his insane mother.

The Bold and the Beautiful spoilers hint that Steffy will face some tough decisions in the coming weeks. At some point, Wyatt and Steffy may reach a crossroads. Will Steffy eventually choose a life with Liam? We’ll give you updates as other news emerges.