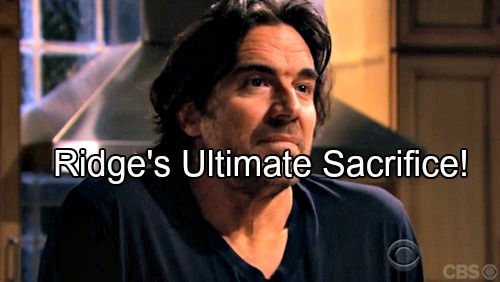 “The Bold and the Beautiful” (B&B) spoilers tease that Caroline (Linsey Godfrey) will begin to crumble. The weight of her secret has really taken a toll. Caroline won’t be sure she can go on like this. She’s been forced to live a lie since the day she told Ridge (Thorsten Kaye) she was pregnant with Thomas’ (Pierson Fode) baby.

First, they had to worry about Brooke (Katherine Kelly Lang). She knew about Ridge’s vasectomy and fertility issues. Ridge tried to put out that fire, but Thomas was always lurking as well. He felt a bond with Douglas and he just couldn’t stay away. Then, Katie (Heather Tom) found out the truth and it was all downhill from there.

Related: Will Caroline Leave Ridge For Thomas? Vote in Our Poll?

Thomas knows Douglas is his son now and he’s made it clear that he’s calling the shots. If Ridge and Caroline don’t go by Thomas’ rules, exposure could be imminent. Unfortunately, Caroline has no idea that the secret is already spreading.

Soon, the secret will lie in Bill (Don Diamont) and Brooke’s hands. They’ll confront Ridge with their new knowledge and he’ll flip his lid. Ridge tends to get angry when he’s called out for his poor choices. Nevertheless, he’ll know what he has to do.

“The Bold and the Beautiful” spoilers say Ridge will make a suggestion that will involve a great sacrifice. He’ll want to preserve his family’s happiness in spite of the costs.

Perhaps Ridge will hand over control of Forrester Creations to Bill in an effort to keep his secret under wraps. Of course, Rick (Jacob Young) will wonder what’s up if Ridge makes an unexpected move like that. He’ll obviously start sniffing around and that can only lead to bad news.

You can bet that Rick will get updates on what Ridge is hiding eventually. Rick probably won’t be satisfied until he’s back on the Forrester throne. Caroline may also find out that Bill and Brooke are in the loop on Douglas’ paternity. This woman can’t take much more. She could completely fall apart if things keep snowballing.

As for Katie, she’ll take drastic action to keep her marriage intact. B&B buzz hints that Katie may end up going too far. The show has been building to something big and we can’t wait to see what it is. Stick with the CBS soap to watch Katie risk it all.