The Bold and the Beautiful (B&B) Spoilers: Bill Furious Over Wyatt and Steffy’s Engagement – Tries to Warn Liam 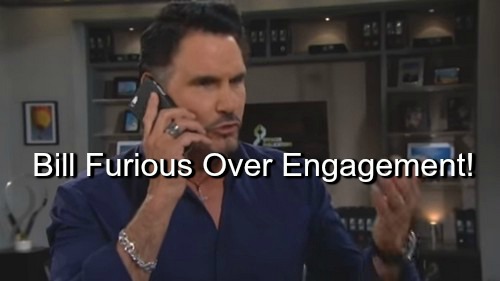 “The Bold and the Beautiful” spoilers for Tuesday’s episode, March 1, tease that Steffy (Jacqueline MacInnes Wood) will face questions when she reveals her big news. Now, as CDL exclusively told you would be the case, that Steffy has accepted Wyatt’s (Darin Brooks) proposal, she’ll have to deal with the backlash. Ridge (Thorsten Kaye) will be particularly puzzled by Steffy’s decision.

Steffy recently opened up about her hesitancy to move on with Wyatt, but she’s starting to realize that it’s time to let go of Liam (Scott Clifton). Despite Ridge’s reservations, Steffy will believe that Wyatt is the man she belongs with. Of course, we all know that’s only because Steffy thinks Liam isn’t an option anymore.

Meanwhile, Wyatt will make the announcement to Quinn (Rena Sofer) and Bill (Don Diamont) over at Spencer Publications. Quinn knows already thanks to Steffy’s message, but she’ll be overjoyed to hear Wyatt elaborate. Bold and Beautiful spoilers reveal she’ll insist that she knew the potential of this relationship long before Steffy and Wyatt did. Quinn will add that she’s been hoping and praying for this day to come.

Bill, on the other hand, won’t be pleased with the latest developments. “The Bold and the Beautiful” spoilers indicate that Bill will call Liam and attempt to talk some sense into him. In a voicemail, Bill will shout that Liam has always wanted Steffy. He’ll tell Liam to get his butt back there and claim what’s his.

Liam won’t be receiving Bill’s message if Quinn has anything to say about it. With Deacon’s (Sean Kanan) help, Quinn plans on keeping “Adam” all to herself. Nevertheless, Quinn can’t keep her secret indefinitely. Now that Steffy and Wyatt are set to tie the knot, the countdown is on for Liam’s memory to return.

Will a suddenly enlightened Liam eventually make a mad dash to the altar? It sounds like something that would be in B&B’s playbook. Unfortunately, Liam wasn’t quick enough to stop Hope (Kim Matula) and Wyatt’s nuptials the last time around. It should be interesting to see if history will repeat itself with Steffy. Stick with “The Bold and the Beautiful” for updates on the intense drama ahead.

So B&B spoilers fans, what do you think about the news that Steffy is trying to move on? Will Steffy really be able to do that? Will Liam remember everything right before those wedding bells ring? Could Liam miss out once again? Voice your opinion in the comments below and don’t forget to check CDL often for the latest “Bold and the Beautiful” spoilers, updates and news.