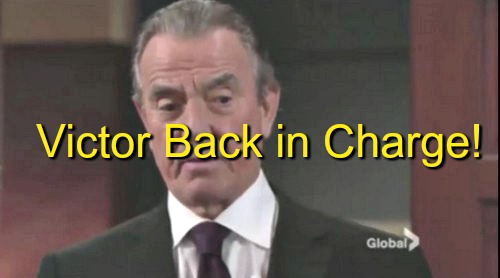 “The Young and the Restless” spoilers for Monday’s episode, March 7, tease that the stress will start to get to Jack (Peter Bergman) and Phyllis (Gina Tognoni). They’ve been going back and forth for months over the Marco (Peter Bergman) issue. Now that the truth is finally out, they’re still disagreeing on how far Phyllis should go for revenge.

Jack isn’t sure Phyllis will ever be satisfied in her efforts to make Victor (Eric Braeden) suffer. “The Young and the Restless” spoilers say Jack will shout that he’s had it with Phyllis’ reckless attitude. She’ll bark that he’s not the only one who’s had it. As Phyllis tries to stomp off, Jack will grab her arm and urge her to wait.

Phyllis may not be in the mood to discuss their problems. She’s too focused on retribution to worry about anything else. Y&R spoilers say that if Jack can’t learn to see things from Phyllis’ point of view, she might decide it’s best to go their separate ways. Young and Restless spoilers suggest they could be headed for a breakup. Stay tuned to see if Jack and Phyllis will call it quits soon.

Elsewhere, Stitch (Sean Carrigan) will determine that Michael (Christian LeBlanc) could be his only hope if he wants to keep custody of Max (Jared Breeze). Stitch is facing allegations of child abuse and he desperately needs Michael’s counsel. Monday’s preview video shows Stitch confessing that he’s scared he could lose his son. He’ll ask Michael if he’s willing to help him out.

Other “Young and the Restless” spoilers reveal that Victor won’t be giving up his throne just yet. He’ll apparently get out on bail and return to the office to find Victoria (Amelia Heinle) in his chair. Victor will give Victoria the boot and slide right back where he belongs. The Moustache insists that he has work to do – watch out Genoa City, watch out world!

Victor has a lengthy court proceeding ahead of him and he’ll have to be prepared for anything. Of course, Victor may use this time to plot against his enemies as well. There are plenty of people Victor would like to turn the tables on and Y&R fans know that he will. Stick with the CBS soap for updates on Victor’s mission to beat the charges and get vengeance.

So Y&R spoilers fans, what do you think about the news that Jack and Phyllis will be at odds? Will their relationship be torn apart? Will Michael agree to help Stitch? What will be Victor’s next move? Voice your opinion in the comments below and don’t forget to check CDL often for the latest “Young and the Restless” spoilers, updates and news.