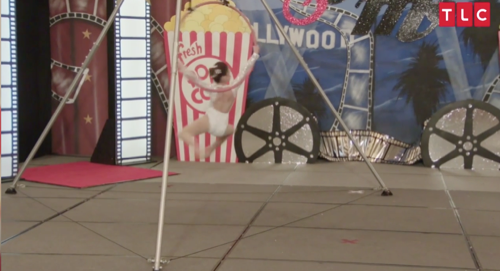 On last week’s episode, one mom punches another due to a circulating rumor; Cambrie’s team struggles on and off the stage.  If You missed it we have a full and detailed recap, right here for you!

On tonight’s Toddlers & Tiaras episode as per the TLC synopsis, “A Cowgirls & Crowns pageant in Georgia finds Cambrie’s Court hoping to make a comeback after a tough loss to Top Model.”

On this week’s episode of Toddlers and Tiaras Cambri and Amanda prepare to go head to head once again. This time they are competing in Amanda’s back yard of Atlanta in the Cowgirls and Crowns Pageant in Atlanta, Georgia. Cambri is still upset about losing the Mega supreme crown to Top Models last week. This week she is bringing heavy hitters Landry and Hallie to Atlanta to compete against Top Models.

Amanda is bringing a new young woman named Simone to compete. This worries Cambri because Simone has beaten Landry and since she took the Mega Supreme at last weeks pageant that makes her tough competition for Cambri’s girls.

Cambri goes to coach Landry at home with her cousin and her friend. She is very impressed with her skill and ability. Cambri tells her “You will be able to do this.” Meanwhile Amanda is Skyping with Simone and her mother. The two ladies are talking about Simone’s outfits for the pageant and whether they should go with cowgirl outfits or Southern California casual. Simone does her routine for Amanda. She tells Amanda “I nailed it. Her mother tells her “You failed it.” Amanda seems very impressed with Simone.

On the day of competition Hallie and Landry are having a fun political debate backstage as they are getting ready. Hallie says “I am a Democrat because Hilary has hair that sticks to her head. When Donald Trump shakes his head his hair falls off.” Landry is not hearing it.”

Before the pageant even begins Amanda has her own issues. Her make up artist texts her and tells her that due to a scheduling conflict he will not be there to do hair and make up for the Top Model girls. She is not happy about this. She says “I don’t even have all of my stuff and now I have to do hair and make up for all of my girls by myself. I don’t know how I am going to do this.” After alot of chaos she manages to get her girls ready to go out and showcase their dresses. The judges are impressed by Landry, Hallie and Simone.

Next up is the fashion competition where the girls showcase their outfits and their talent. When Landry’s turn comes up Nina is worried that she is going to be sick on stage. There is a delay waiting for Landry to come to the stage. When she comes to the stage there is another delay while her music is found. They realize that the email containing Landry’s choice of music has been lost so her cousin has to run out to the car and grab the CD.

Once the music crisis is solved Landry’s performance goes off without any further issues and everyone is impressed. Up next is Simone. She is dressed in a Drive Time outfit. Cambri says “This is not Cowgirls or Crowns, but Top Models just comes out and do whatever they want to do.” Simone does really well. Unique is not impressed however. She does not hesitate to let Simone know this when she steps off stage. She tells her “You missed a couple steps. You can’t do that next weekend.” Simone says “They don’t know my routine.” Even Amanda steps in and tells Unique “You’re being too hard on her.” Unique tells her “I’m not being too hard on her.”

The crowning begins with the seven year olds. Callyn is second runner up. Emighlee is named queen of the 7 year old. 8 to 9 year olds are up next. Madison is named queen of the 8 to 9 year olds. This makes Landry’s family happy because it means that she is still in the running for the Mega Supreme title. Landri won a title, but it wasn’t the title they were hoping for. Simone wins Grand Supreme. She says “I am not disappointed I didn’t win ultimate Grand Supreme because I still got money and i still won a title.” The Ultimate Grand Supreme title goes to Hallie. The Top Models are really not happy that Hallie won. Amanda says “She wasn’t really one of Cambri’s kids. Cambri didn’t train her from the ground up.

Cambri is ecstatic about the results. She says “Even when Hallie was with Top Models she was trying to get her in with me because her daughter wasn’t getting what she needed. Now she is and she won. They are just mad.”