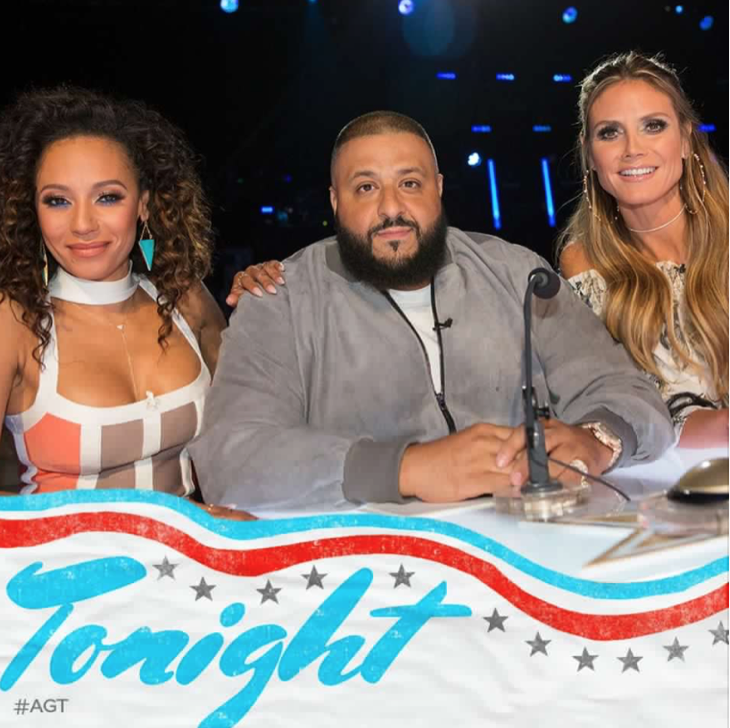 Tonight on NBC America’s Got Talent begins its new season with an all-new Tuesday, July 25, 2017, episode and we have your America’s Got Talent recap below!  On tonight’s AGT season 12 episode 8 as per the NBC synopsis, “The Judge Cuts continue with guest judge DJ Khaled joining the panel.”

Tyra, Heidi, Mel, Howie and Simon are joined by guest judge DJ Khaled for the judge cuts edition of the show. Twenty acts will compete for just 7 spots in the live finals. Sammulas is 22 years old and has been singing since he was 2 years old. He grew up in Miami, Florida and has been struggling for years to make it as a singer and performer. Tonight he is looking for his big break. Howie thinks he has an 70’s disco feel and DJ Khaled thinks he did an incredible job. Mel and Heidi loved his act. Simon is torn because while he was good he is not sure Sammulas was the best.

The quality of the other performers of the night will determine if Simon votes for Sammulas to move on. Steven Scott is a 44 year old comedian from New York City. DJ Khaled says it takes a lot to make him laugh and he was laughing. Mel says she will be Steven’s champion during the deliberations. The Quiddlers are from Las Vegas, Nevada and plan to transform into the biggest celebrities in the world. The come out dressed as Mel, Simon, Howie and Heidi. The perform on their knees as little people. DJ Khaled thinks they are very funny and Simon says he is sexually attracted to his mini-me. Mel thinks they are genius.

Steven Scott is a 44 year old comedian from New York City. DJ Khaled says it takes a lot to make him laugh and he was laughing. Mel says she will be Steven’s champion during the deliberations. The Quiddlers are from Las Vegas, Nevada and plan to transform into the biggest celebrities in the world. The come out dressed as Mel, Simon, Howie and Heidi. The perform on their knees as little people. DJ Khaled thinks they are very funny and Simon says he is sexually attracted to his mini-me. Mel thinks they are genius.

Junior and Emily are a brother and sister Salsa duo. Their parents divorced when they were quite young and their father worked a lot of hours to support the family. Junior got into a lot of trouble when he was young and their father thought getting him into dance would put Junior on the right path. He was right. Junior and Emily are thrilled to dance on America’s Got Talent. They present a complete new routine for the judges tonight. Both Mel and DJ Khaled thought the act seemed very short. Both Heidi and Simon thought they were better the last time they performed.

Shannon and her chicken, Jokgu are from Germantown, Maryland. Jokgu plays the piano with his beak. This time Shannon brings Jokgu’s sister Aichen to perform a rock battle against Jokgu. Both chickens freeze up and won’t play their pianos. All of the judges buzz the act and they are eliminated from the competition. Dakota is a 23 year old singer and Heidi was very much looking forward to his performance tonight. He sings “Can’t Help Following In Love” and the judges just aren’t sure if he will move forward or not. They need to see the other performers of the night. Twenty-one year old Chase Goering is another singer/song writer. He performs an original song that is about him. Mel, DJ Khaled and Howie give him a standing ovation. Heidi and Simon both thought he was very special. DJ Khaled hits the golden buzzer and Chase is guaranteed a spot in the live finals.

Tulga performs several tricks with a flaming log. He also puts Heidi and Howie on swings at the end of the log and turn in circles. The judges find his act very entertaining. Next up is Mirror Image, twin brothers, Colton and Trent, who sing and dance. Simon was not very fond of their act the first time they performed so their goal tonight is to WOW Simon. .Simon buzzes the act before they finish but the other judges love them. DJ Khaled finds them “very interesting”.

Evie is a 13 year old singer and she will sing “I Try” by Macy Gray. Recently her family found out that her father’s cancer has not responded to treatment and they are not sure what the next steps will be. The family is just trying to enjoy their time together. Howie thought her performance was beautiful and Mel was moved by her voice. Heidi and Simon think she is very special. All of the judges find her situation heart breaking. Kyle Eschen is a 24 year old magician. He is nervous about his performance but does a great job. Simon congratulates him on his performance. Xavier Mortimer is a 37 year old magician also. He had a lot of WOW moments but only one magician can move forward.

Collin describes himself as a real life Sherlock Holmes. He says he knows things that other people don’t. He licks Mel’s hand and tells her what she has eaten today. He reads Mel’s mind and uses Howie to open a locked cell phone. His performance is mind blowing. DJ Khaled thinks he is almost scary. Simon says it is more than magic. Collin has special powers. Howie loved it but just doesn’t know how they will whittle it down to just 6 contestants now that Chase is guaranteed one of the spots.

Puddles the clown is a sad clown who sang opera the first time he performed. Tonight he sings, “All By Myself”. Mel loves Puddles but Heidi didn’t find his performance very exciting. DJ Khaled found it all very confusing but Simon and Howie thinks he is worth the fight. Yoli Mayor is from Miami, Florida and is the last performance of the night. She was very shy growing up and was bullied because of her weight. Tonight she will sing “Love on the Brain” by Rhianna. Throughout her performance the audience reacts very positively. Heidi thinks she is the best singer of the night. DJ Khaled found her performance flawless. Simon finds her fascinating and thinks she doesn’t even realize how good she is.