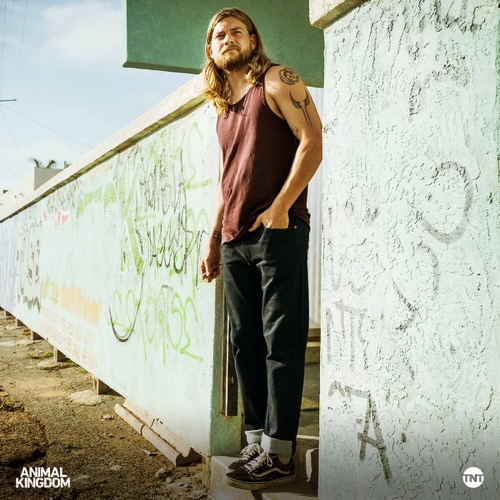 Tonight on TNT Animal Kingdom premieres with an all new back to back Tuesday, August 1 season 2  episode 9 Animal Kingdom recap called, “Custody.” On tonight’s Animal Kingdom season 2 episode 7 as per the TNT synopsis, “Options are considered by Craig and Deran when Baz bows out of a yacht heist. Elsewhere, Baz enlists J for a more personal job.”

The show starts with Craig and his friends riding wave runners and completing tricks. They watch a large yacht in the distance and plan to rob the people on board soon. Nicky looks at guns in a guns shop but the owner tells her she has be 21 years old to make a purchase. She leaves empty handed. Deran, Pope, Craig and Barry meet to firm up their plan to rob the yacht. Including the crew there will be 100 people on board. Barry is worried that it is too many people but Craig thinks they will all be drunk and easy to take. Barry and Craig argue but finally agree to the terms. However, Craig wants to bring Nicky in to distract the coast guard and Barry is not happy.

Barry and Pope talk about what they are going to do about Smurf. Barry thinks they need to send a message. J comes home and Janine quizzes him on the information on the fake ID’s she created for him. He passes with flying colors. Deren and Craig argue more about including Nicky in the robbery. They also try to figure who they know that speaks Spanish who could help them with the deal. Barry comes home to Maria and she asks about what his next job will be but he doesn’t want to talk about it. He finally tells her they will be robbing Smurf.

Pope and Janine talk and she tells him they have nothing to worry about, they can’t be connected to Caz. He hugs her. Barry tells Maria that Smurf killed Caz. She can’t believe it and wonders who else knows. He apologizes that he wasted the last ten years on Smurf when he could have been with her. She tells him to do what he has to do and then came back to her. Deren and Craig meet with Janine and ask if she will clean their money from the yacht job. She agrees and invited them to stay for dinner.

Barry meets up with J on the street and asks if he wants in on a job right then and there. He agrees and hops in the car with Barry. Nicky tells Craig she needs a gun to work this job but he refuses. Craig tells her a story of the first time he pulled a job with Smurf. Barry and J head to a storage unit and drill into the doors. They find several safes. Craig and Deren meet with Luis but decide he has gone straight and don’t want to ask him to join them in the robbery. They decide to call Marco. Barry and J move all of the safes one unit over. Barry tells J not to believe that Smurf gives a damn about him. She needs him more than he needs her.

Craig and Deren meet with Marco and decide they need to get him drunk so he will agree to help with the robbery. Barry drops J off and returns to the storage unit and pries open the safes. He takes all of the money as well as Smurf’s passport. Pope sits in his room obviously uncomfortable and then does to the sheriff’s office but doesn’t go in. He meets with Amy and she asks why he didn’t come to bible study. He worries that his family is going to fall apart and there is nothing he can do to stop it. She encourages him to ask for forgiveness and to unburden himself. He tells her he is not a good person.

Smurf goes to a hotel room and lets herself in. She kicks the prostitute out of the room and uses a Taser to knock the man in the shower unconscious. Pope drives Amy to meet with her brother. Amy and her brother argue about her son and the dog she bought for him. Amy asks Pope to leave but he holds her instead and they have sex. Smurf ties up the man from the shower until he tells her the combination to his safe. She gets her money back but asks why it is short $100,000. He says he spent it but it doesn’t matter since she is going to kill him. She doesn’t kill him but instead shots him in the knee cap.

Pope and Amy wake up and he encourages her to go to church. They decide to go to the store instead. She thanks him for being a good person. Craig, Deren and Marcos drink and talk about old times. They try to convince Marco to join them and he finally agrees. However, they have to do something for him. They will move his drugs for him one time only. Barry brings home a bag full of cash worth $700,000 and shows Maria. They wish they could see Smurf’s face when she realizes it is gone. Barry plans to take everything Smurf cares about away from her. Smurf arrives at her storage unit and finds it empty.