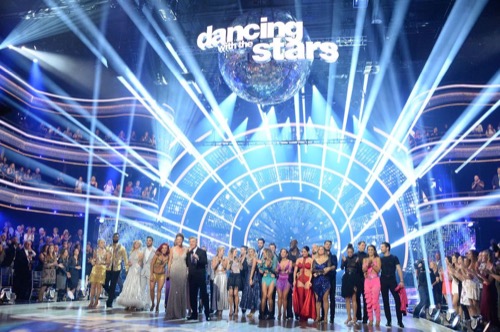 Tonight on ABC the glitz and the glimmer returns to the ballroom as another new episode of Dancing With The Stars season 25 airs! We have your all-new Monday, September 25, 2017, season 25 episode 2 DWTS “Ballroom Night″ and we have your Dancing With The Stars recap below! On tonight’s DWTS Season 25 episode 2 as per the ABC synopsis, “The 13 celebrities dance to some of the most classic ballroom styles that everyone knows and loves, as Ballroom Night comes to “Dancing with the Stars,” live.”

Tonight will put all of the stars to the test with the first of two brand new routines they had to learn this week. Tonight is also about the elegance and sophistication of ballroom dancing. Fans of CBS’ Dancing With the Stars will also see the first elimination of Season 25 tonight.

Len: Quickstep is about speed and control, the speed was there but it was lacking in control. You looked so confident.

Bruno: Your chemistry was really sizzling, your shoulders were better but need to have footwork more exact.

Carrie Anne: What I loved about it, every shape you hit was beautifully executed; a really great performance.

Tonight Nikki wants to represent her Nana who is such an elegant lady.

Bruno: My fair Nikki, Starry eyed. So lady-like, wonderful sweep, elegance and her movement was well controlled and a very good job.

Carrie Anne: What I love is that so early on in the competition you have learned to trust. It made them dance as one and made it look stunning.

Len: Your head looked much better, you weren’t looking down and it had soft lyrical movement. The whole thing had a beauty about it and I thought it was great.

Carrie Anne: Oh Mark I have missed you! The creativity was fantastic and a great way to express you. There is one tiny thing out of the gate, your neck, as you don’t quite know where to put it.

Len: Mark I missed you, but you probably haven’t missed me. Tom laughs. Loved the creative choreography; it was bright it was light, it was entertaining but you cannot do the quickstep without maintaining the hold but I loved the dance.

Bruno: I thought I was on a psychedelic trip and she was flying high. I like that you push your partner to her limit but be careful because of the speed, don’t throw your arms, still maintain the length. It was wonderful.

Barbara cries remembering her youth and doesn’t want anyone to think she is stupid; but also acknowledges that its those moments that forced her to get up and be a stronger person.

Len: To be honest, I would like more of an exaggerated top line. However it was better than last week so a bit of a bounce back so good on you.

Bruno: I think your stock is rising; better placement and you’re following much better than last week and it was a proper and recognizable tango.

Carrie Anne: Tonight you radiated a new elegance and were more relaxed. Last week you pushed too hard making it hard to watch, but be careful in the hold, you’re pulling in too much. Barbara jokes that Carrie Anne would do the same.

Bruno: You started well but when you were doing the spin it became wobbly; then her dress got caught. Bruno says what a shame but something like that you cover and continue as a performer; keep it extended and don’t close in; it will be better next time.

Carrie Anne: Lacheys are tight, what got Drew the win was at the end he was able to drop his shoulders, which they worked on the whole season; you are the same but on week 2 I already seen an improvement. Peta you need to stretch him out more, you need to round out your hips.

Len: Last week I was so pleased with you and this week was too fragile. (Maks boos him). Tomorrow when you do the tango, come out and get in there!

During rehearsal, Drew got hurt and was unable to bend his leg nor put weight on it.

Carrie Anne: That was a showstopper; that was fantastic the highest knee skips I have ever seen in the whole world. Some movements are lanky, you entertained us all.

Len: If you were a property, I would have trouble getting a mortgage, it was so loose. (He is booed by the crowd). I like your enthusiasm.

Bruno: I’m going to buy that fixer upper because I’m telling you it was a fantastic luxury performance; you had a classic Hollywood movie performance, but you need to get the arms under control so you don’t look flappy.

Tom tells her that was darn good and she is very proud that she didn’t fall.

Bruno: Wow, look at the love goddess was like watching Ava Gardner at her saltiest and throw in some Jessica Rabbit in there too; for a foxtrot it couldn’t be foxier.

Carrie Anne: You are a superstar, your movements are stunning you were like liquid gold tonight. Everything was so polished “to the pinkie”.

Bruno: What happening tonight, you’re like a missile right on target, intense precise and you didn’t miss one step; the content excellent, Witney, good job.

Carrie Anne: It was everything you wanted it to be and are an incredibly dynamic couple that I thought she was too fiery for you but together you’re an explosion.

Len: You went for that like a boiling kettle. I thought it was a little over aggressive (everyone boos), but overall I thought you did a good job.

Tom says that is the most he has heard Len booed in a while! Tom admires that Frankie is doing everything he can for his back, to stay in the competition.

Carrie Anne: Its getting hot in here. Holy Cow! That is why I like to come to work, it was great movement and much more expressive and you managed the height difference very well.

Len: I don’t get it, this is ballroom night all about elegance and sophistication; this was too raunchy for me!

Bruno: Oh you definitely brought sexy back by the truck load. I couldn’t think about the dancing at all as it was a sex trot straight into the bedroom but I am not complaining as you went into it very beautifully.

Len: Sasha, I think you have a really nice position and hold but Gleb I get a bit fed up with the slow dances, they all look a bit the same. The next time you come out, if you do, just come out and knock my socks off Sunshine.

Bruno: So luscious and glamorous and the back spin into the arms of your partner, was beautiful but you have to watch your free arm, you cannot just throw it as a plank and you really need to work on that; you were karate chopping things.

Carrie Anne: What are you talking about? I respect you Bruno, however I thought your arms were absolutely lovely, you have natural flexibility but you didn’t hide her in choreography.

Victoria Arlen and Val Chmerkovskiy – Tango – “Look What You Made Me Do” by Taylor Swift.

Bruno: Victoria what did you do, you scared me; that was a tough cookie tango and I loved the role reversal. Very clever and very well executed and you look like a leading lady.

Carrie Anne: People don’t realize how important technique is, and every single movement you made looked so polished and spot on, your technique is fantastic and I don’t know how you’re doing it

Len: I like the drama and intensity of the dance. I thought that was a super duper dance.

Derek Fisher and Sharna Burgess – Foxtrot – “Hallelujah, I Love Her So” by Ray Charles

Carrie Anne: This is frankly difficult, there is something magical about you, you’re at ease and able to light up a room but you dance a little small. You need to realize this is your court and you need to own the whole thing, sometimes your arms are still in and more horizontal with your feet. Its fun to watch you and I want more.

Len: It was fun and it was light-hearted and a joy about it; but you need to work more on finesse and technique.

Bruno: It had the feel of a romantic comedy, like a Doris Day movie, you play off each other very well and I actually liked the performance but you need to adjust your posture, as you tend to stick your bum out; you have the quality of a great performer.

Len: I liked it but it was little lyrical and sharp in the movement on occasion; you have to think about the characterization of the dance but you are a terrific dancer.

Bruno: For me, you two delivered a true ballroom sparkler. I liked the attention to detail of the musical interpretation and gave it character. You dance like a singer.

Carrie Anne: Its undeniable that you’re an amazing lyrical dancer but I would like to see more ballroom tomorrow; but you are amazing.