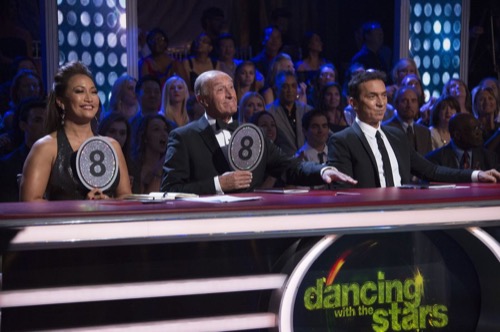 Tonight on ABC the glitz and the glimmer returns to the ballroom as another new episode of Dancing With The Stars season 25 airs! We have your all-new Tuesday, September 26, 2017, season 25 episode 3 “Latin Night” DWTS  and we have your Dancing With The Stars recap below! On tonight’s DWTS Season 25 episode 3 as per the ABC synopsis, “With the first elimination having taken place on Monday, the 12 remaining celebrities ready themselves for one of the hottest nights in the ballroom – Latin Night, on “Dancing with the Stars,” live.”

Make sure to bookmark this spot and come back from 9 PM – 11 PM ET for our Dancing With The Stars recap. While you wait for our recap make sure to head over and check out all our DWTS recap, spoilers, news & videos, right here!

Live from Hollywood, it is Latin night and the professionals do a nice medley of the various dances they will be performing tonight; at the end of the dance, the celebrities join their partners and everyone is welcomed by Tom Bergeron and Erin Andrews; promising it to be a “Hot” night as they do their second dance this week.

Len: I wasn’t keen on all the stuff at the beginning, it got a bit better but you got to use your feet and legs stronger. It was okay.

Bruno: You were teasing me to death. It was the longest foreplaying samba in history. Once you got going, it was nice but you lost rhythm; the timing was off but the look was on.

Carrie Anne: You guys were connected in all the right places, but you need to finish your movements. I appreciate the movement and connection and continued growth.

Bruno: Aww, my Darling that was like a mini-play, so well told and deeply felt. It had a very contemporary feel and you lost a bit of the hip action and you got to keep it going and not lose it in translation but a very nice dance.

Carrie Anne: It was authentic and the vulnerability when you dance makes me feel like I get to know you. I like that you showed your legs tonight and Val tells everyone its her birthday. Honesty and vulnerability works every time.

Len: There was emotion involved but very little else for me; there was nothing recognizable of the rumba in the dance. For me there wasn’t enough rumba content and happy birthday. Everyone sings Happy Birthday to Victoria with a cake and huge bouquet of flowers; the card and flowers are from Taylor Swift for dancing to her song.

Carrie Anne: Locked and Loaded!! That was amazing and you are really understanding what we’re looking for; you were taking, owning and moving the space, a few awkward arms going on but done very well.

Len: That was a dance with spirit and determination. You have to watch your hands because they go very flat. A thumb without a thumb is like a kiss without a mustache, is what his old teacher said. Well done, I liked it.

Bruno: The good thing is you definitely unleashed the mean streak and went on overkill, like Megatron, it was good but you have to be careful to strike the right balance because you are losing artistry.

Len: I liked it, plenty of samba and a bit of sparkle in your performance. You did a good job tonight.

Bruno: Awww, so pretty in pink. Such a lovely dancer and a good feel for the music, you place your feet so well but don’t be shy because you’re gorgeous and sell it even more.

Carrie Anne: what part of that performance was shy; I want to be like you and the best part of the show is watching someone like you blossom, You had the flair.

Bruno: Nick, I am shocked with your table manners and what would your mother think. I appreciate you trying to get into character. You cannot step a tango, you must glide and you’re still walking it, you need to feel the music.

Carrie Anne: Tonight I saw a lot more passion and have noticed you are tightening your hips. It was appropriate for who you are, the lifts were executed excellently.

Len: (who is giving many faces) The thing that was missing, Nick I am a kind guy and don’t have a nasty bone in my body… its about passion and intensity and that was lacking, the steps were there. Learn the dance, learn the steps then learn the character.

Emma forces Drew to get a spray tan because he is so pale as she explains this week is about “flesh”.

Len: I think the date might be on- me and you! You haven’t worked on the house but you worked on the backyard. Prick up your ears as this is the best dance you’ve done so far.

Bruno: You are Eduardo the Latin lover and you got it together my darling; beautiful lines and I’m overlooking the tanned ab lines. (Tom jokes that they hit happy hour before they got to the Judges’ table).

Carrie Anne: I found it very expressive; I can tell you have very little background in dance… I mean that in the nicest way. (Bruno laughs so hard he falls out of his chair coughing). You are in control in everything you are doing and very well rehearsed.

Bruno: Debbie, the cougar from Cuba; naughty but nice even when she bites. I liked it, very intense just watch the feet and don’t let them go bananas.

Carrie Anne: Nice to see the more aggressive side of you, a solid performance but agree with Bruno about the energy from the hip down.

Len: Debbie, you little Strumpet. You really captured the night club vibe, it was hot and steamy and a lovely connection and you’re best dance so far.

Carrie Anne: See, real women can wear pants and be fierce. You were so in sync together and I loved when you got into each other and took control.

Len: It had energy and pace, there was so much going on Maks make this girl focus because she is 100% a contender. Bruno: That salsa really got my taste buds going; juicy, spicy and you were giving it and out showed Maks, you did very good.

Before they dance he confirms he is single, who thinks highly of himself and he is a sexy individual. Judges comments

Len: I really hope you are back and I hope you are not in peril because you are a sports man and they have a will to win who get knocked down and come back stronger; you kept you posture and well done.

Bruno: Hose me down I am on fire! You two turned the heat on but one little thing, I loved the performance but you need to get more bounce on those legs, a little stiff on the legs.

Carrie Anne: You are a crowd favorite but I still want to see more and feel you’re still small and need to dance more; more with the body movements.

Bruno: That showgirl is a firecracker, the energy and speed was incredible that it was constant, left me breathless.

Carrie Anne: I completely agree with Bruno, you came out on a mission and accomplished it. You ARE the music, a fantastic way to do a salsa.

Len: I loved no messing, no stressing. Well done and fabulous.

Carrie Anne: Who are you? Frankie you have swagger and the best part about it is that you went from swagger and cha-cha. Well done.

Len: No hankie pankie Frankie that was a terrific entertaining performance. I’d like to congratulate you and the stars and their professional partners for getting through this grueling week. He stands up and claps for them.

Bruno: That was so deliciously cool and cheeky, there was so much in there that almost demands a second viewing. You two together are absolutely splendid. Scores:

Tom announces the first couple in jeopardy is Nick and Peta and joining them in jeopardy are Debbie and Alan, the rest are safe and all coming back next Monday to dance. One of these two couples has the lowest of viewer and judges votes and the couple leaving us is… Debbie and Alan.