Days of Our Lives Spoilers for Next 2 Weeks: Sami Gets Arrested – Bonnie and Sheila Plot Getaway – Eric Confronts Dirty Brady 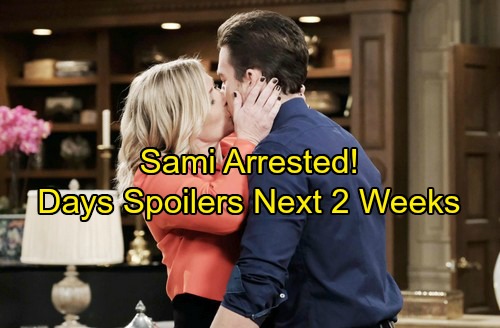 Days of Our Lives (DOOL) spoilers for next two weeks tease that some shockers are coming up. The week of October 16-20 will bring major drama for Sami (Alison Sweeney). In addition to some fierce faceoffs, Sami will throw Abigail (Marci Miller) for a loop by kissing Chad (Billy Flynn).

While they deal with that startling development, Kayla (Mary Beth Evans) will face some awkwardness with Tripp (Lucas Adams). Part of Kayla understands that Tripp was troubled and regrets his actions. However, it has to be weird casually running into the stepson who held her at knifepoint. 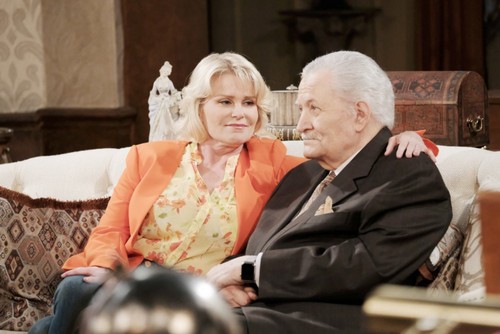 Kayla also resents the way Steve’s (Stephen Nichols) been focusing on Tripp instead of Joey (James Lastovic). This family isn’t quite ready to heal yet, but maybe they’ll move in the right direction. Meanwhile, Steve will head to Statesville to see Hattie (Deidre Hall). He’ll want to know everything Hattie can tell him about “Adrienne” (Judi Evans) and their fake therapy session.

Of course, Steve is actually perplexed by Bonnie’s (Judi Evans) behavior. The real Adrienne will continue to suffer behind bars for now. Back in Salem, Justin (Wally Kurth) will wonder what “Adrienne” is thinking. He’ll try to wrap his head around why she could possibly want to marry Victor (John Aniston).

Victor and Bonnie will begin their nuptials, but plans will change during the week of October 23-27. Days of Our Lives spoilers say Adrienne will finally get her hands on a phone. She’ll call Lucas (Bryan Dattilo) and help will soon be on the way. Lucas won’t understand the swap right away, but Justin will offer some clarity. 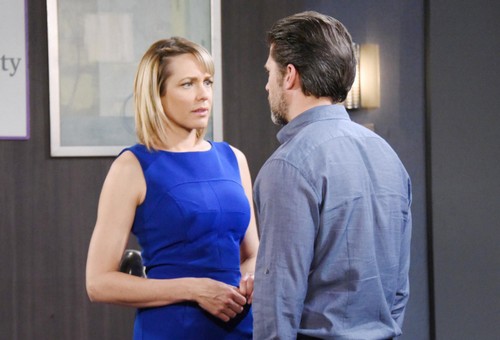 Maggie (Suzanne Rogers) and Justin will stop the wedding, but Bonnie will try to make a break for it. She’ll plot her getaway with Sheila (Tionne “T-Boz” Watkins), but it looks like Eli (Lamon Archey) may have to help them out. It’s clear that Eli owes Sheila big time for whatever he did to her.

Eric (Greg Vaughan) and Brady (Eric Martsolf) will also clash over Nicole’s (Arianne Zucker) sudden departure. Days spoilers say Eric will be convinced that Brady was behind it. Plus, Eve (Kassie DePaiva) will return on October 27. DOOL fans should definitely catch her first day back.

After an altercation the police station, Sami will get arrested! Fortunately, Days of Our Lives spoilers state that Sami will wiggle out of trouble and head to Memphis later. John (Drake Hogestyn), Marlena (Deidre Hall), Paul (Christopher Sean) and Sonny (Freddie Smith) will all join the search for Will (Chandler Massey).

It sounds like these Days storylines are heating up. We’ll give you updates as other DOOL news comes in. Stay tuned to the NBC soap and don’t forget to check CDL often for the latest Days of Our Lives spoilers, updates and news.