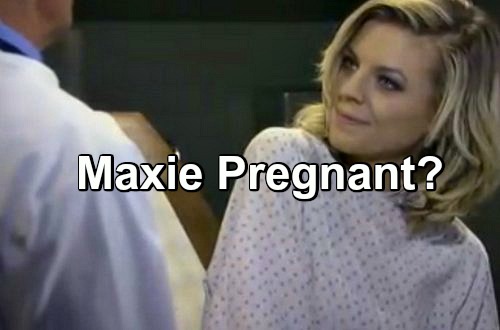 General Hospital (GH) spoilers tease that Maxie Jones (Kirsten Storms) might have more on her mind that just her failed New Year’s Eve wedding and the death of Claudette Beaulieu (Bree Williamson). Is Maxie keeping a pregnancy secret?

Nathan talked about them buying a three bedroom house so there would be: “one for you and me and one for Georgie when she comes to visit, and you know, maybe one for her brother or sister when the time comes.” 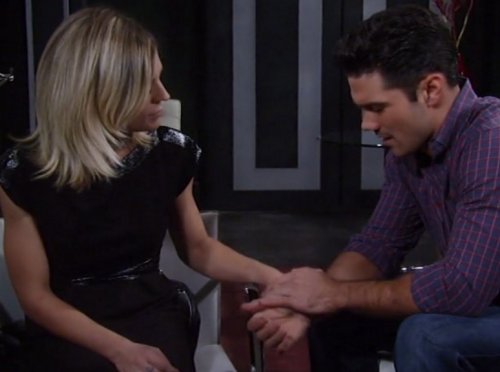 By itself, Nathan’s comments don’t seem that big of a deal, but several incidents since then make it a much bigger deal and GH writers may have been cluing us in that Naxie already has a baby on the way. That will complicate things when Claudette turns up alive.

A day later, once they were back in Port Charles and told Lulu Spencer (Emme Rylan) about Claudette’s death, Maxie said they can’t get married right after that news. She said she felt like she was in limbo but then when Maxie was alone, she flashed back to Nathan mentioning kids.

Also, Maxie went out of her way to mention that she was drinking cranberry juice in a wine glass and said she was “pretending it’s Pinot.” Why mention that except to make it clear she’s not drinking alcohol. Pregnant women shouldn’t drink and GH spelled out for us that Maxie isn’t boozing. Why? 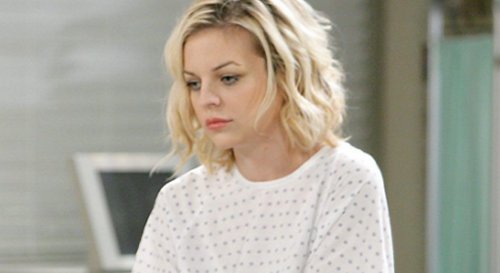 Finally, Maxie was wigging out over the Crimson wedding issue on Friday’s episode and seemed to be falling apart. We’ll find out on Monday, January 16 that the reason she ran out was to go to the airport to fly to Portland. Maxie had a sudden urge to see Georgie.

After all the drama surrounding her pregnancy and Georgie’s early life with her lying to Damian Spinelli (now Blake Berris) and Lulu and Dante Falconeri (Dominic Zamprogna) about Georgie being theirs, she may be freaking out over another pregnancy.

Remember that Maxie was carrying Lulu and Dante’s baby when she miscarried, didn’t tell them about it, then slept with Spinelli, got pregnant and lied to everyone about the baby. It was a mess and it kept getting uglier from there. 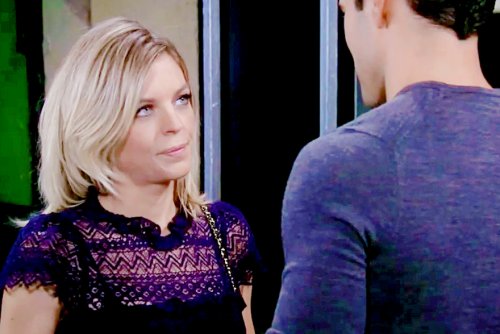 Then there was the court battle over Georgie with Spinelli that Maxie had to face after all her lies came out and she was denied custody of her daughter for a long time. To make it worse, now Georgie lives across the country with her dad and Ellie Trout (Emily Wilson).

But that isn’t Maxie’s only baby drama. Reach back to 2007 and she faked a pregnancy to try and keep Lucky Spencer (Jonathan Jackson) with her. Maxie has a horrid history with pregnancies so if she’s knocked up now, that might help explain her erratic behavior.

What do you think GH fans? Is Maxie pregnant? Do you notice the signs? Share your comments below on a possible Maxie pregnancy and tune into CDL often for the hottest General Hospital spoilers and news.