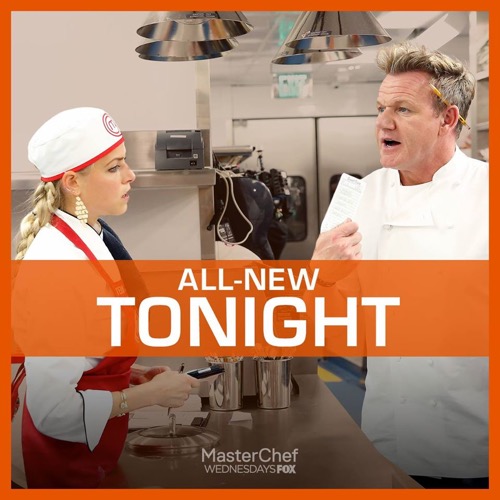 Tonight on FOX Masterchef returns with an all new Wednesday, June 28, Season 8 episode 7 called, “Breakfast, Lunch & Winner,”  and we’ve got your MasterChef recap down below! On tonight’s MasterChef Season 8 episode 7 as per the FOX synopsis, “Cooks head to Beverly Hills and take over the dining-room breakfast service for The Belvedere restaurant at the five-star Peninsula Hotel. After splitting into two teams, the cooks make a variety of dishes for diners and the team that fails the challenge will face a pressure test and cook a perfectly battered fish-and-chips dish.”

MasterChef begins tonight with Chef Gordon Ramsay, Chef Aaron Sanchez and Chef Christina Tosi greeting the home cooks at The Peninsula Hotel in Beverly Hills. They welcome them to the Belvedere Restaurant where they will be taking over as the cooks. They are in charge of the dining room breakfast for the hotel guests.

Since Cate and Yachecia performed the best in the lamb challenge, they are the captains of the two teams. Cate says she wouldn’t want Jeff on her team because he is arrogant. Yachecia doesn’t want Jennifer because she cracks under pressure and isn’t refined enough for this type of challenge.

Christina says the captains are not in control of who is on their team and she tells the cooks to stand beside who they want as their team captain. Yachecia feels she has the underdog team but is confident as she is used to working with the underdogs.

Chef Aaron tells them they are making 5 stunning breakfast dishes that are all made to order; he tells them to change into their chef whites and meet them in the kitchen. Executive Chef David Codney introduces them to the menu of lemon ricotta pancakes, classic eggs benedict, potato waffles and lobster, classic American breakfast and 3 egg omelet. All dishes need to be cooked to order; they are given 60 minutes of prep time.

Yachecia immediately assigns each task to a specific person, very controlled. Cate isn’t utilizing people to the best of their ability. Chef Aaron is concerned that Cate’s team, the red team will have too many leaders and not enough soldiers. Chef Ramsay feels the blue team may not looked organized but the stronger cooks are on the blue team.

The orders begin to come in and the blue team, Yachecia’s team is right on it, while Cate and the red team are a mess. She feels the pressure is unreal and isn’t sure she can do this. Chef Ramsay yells at Cate that the gas isn’t even on in her kitchen yet. Yachecia is happy with her team being so focused and sending everything out; she feels her team will demolish the red team.

The red team in 25 minutes has only served one table for 2 people. Cate is barking out orders but no one knows what they are doing. Adam serves raw lobster and the omelets look worse than diapers. Cate yells for her team to get it together as Chef Ramsay shakes his head. He yells at the team saying if Catecan’t cook two omelets side by side she needs to hand him her apron because this is a joke. Eboni decides to get in “mommy” mode and takes over, everyone agrees Eboni is in charge.

Jennifer is cracking under pressure and hands Yachecia under cooked eggs. She keeps sending out bad eggs and Yachecia says she doesn’t have time to babysit and she reorganizes her team so they don’t go down. Eboni praises her team and Newton takes not that she is a real team leader with timing, communication and team work. Christina praises her for getting the dishes out so quickly.

Chef Ramsay continues to struggle with the blue team, Jeff tries to take them back and Gordon snaps on him saying he doesn’t care and not to send him crap again because he makes Gordon look like a bigger dick than him. When he feels he is waiting too long for the dish he suggests they may have to start the table over again. He calls out the dishes for a fourth time; Jennifer is mad that she is no longer on eggs and they are going to lose now.

Chef Aaron asks the guest how they felt about the dishes, the comments seem to be pretty equal; some feeling they have been coming for years but was disappointed in their dish today, with runny eggs. The red team finishes and Chef Christina tells them to be proud of their work today and they have a strong comeback.

Chef Ramsay returns to the blue kitchen with another plate full of “snot”; he orders the same dish for the fifth and final time. Its the same 2 orders for the last 45 minutes, they scramble to finish or they are going down with the eggs; he counts them down and when they serve another set of bad dishes he shuts the kitchen down.

They check the comment cards, tasted the dishes and saw how they were in the kitchen and the team not facing the pressure test is the red team, thanks to Eboni’s leadership.

Back in the MasterChef kitchen Yachecia, Jeff, Jenny, Reba, Jason, Caitlin, Dino and Jennifer stand at the front and Jeff says what went wrong was from the top down; there was no leadership, as a great leader needs to be able to manage tasks and motivate others.

Yachecia laughs saying its funny that someone as disrespectful as Jeff would say that; they begin to argue and Jeff says she doesn’t deserve his respect at the moment. Reba says this is what happened to their team. Jennifer says Yachecia made a mistake taking her off of eggs and didn’t believe in her; Yachecia denies that saying she sent her to waffles to calm down.

Chef Christina says not all of them are going to compete and its up to their captain to decide. She can save herself or 6 members of her team; Eboni says she would save herself and even tells her to be selfish but Yachecia chooses to save 6 of the home cooks, saying the captain goes down with the ship. She chooses to save Jason, Caitlin, Jenny, Reba, Dino and Jeff, who is utterly shocked after he disrespected her. She feels Jeff fought hard to stay and thinks Jennifer will fail under the pressure. Jennifer is furious and says she wants to know what they are cooking and to get it on.

They turn around and learn they are cooking a dish Chef Ramsay ate growing up, at least once a week. They will be making the British Classic Fish and Chips; because he doesn’t want to hear any excuses, he is showing them exactly how to make the dish. Yachecia and Jennifer are given 45 minutes to make a dish as close to Ramsay’s as they can get.

The home cooks on the balcony finally see the fire in Jennifer and she is determined to win, while others are certain Yachecia will win as she does fish fries all the time for her church.

Chef Ramsay comes to Yachecia’s station, she says she teaches love and when you make a mistake, you own it; that is why she didn’t choose to save herself. He admits he has never seen Jennifer so determined, feisty and focused and asks what she is worried about, she wants to make sure the fish is cooked all the way through and her fries are crispy. He commends her on staying back and tells her not to underestimate what she did.

Chef Christina visits Jennifer’s station who says she is going to prove herself through the fish and chips she will serve. Christina tells her to keep cool and focused and she can do this. Christina says Jennifer is different than they have ever seen her but she worries that her batter is too thick. Aaron says Yachecia is focused on everything and isn’t getting fazed by all the drama, she just wants to come and redeem herself. Yacheicia uses the perfect size of fish but Jennifer’s is too big and realizes she forgot lemon and Yachecia is a good sport and gives her one. They both finish on time with their dishes and are asked to bring their platters forward.

Chef Ramsay starts with Yachecia’s dish saying its visually beautiful with great color on the fries and the fish; but the flavor is key. The batter is crispy, he cuts it open and sees beautiful flaky cod, but the fries are too thick and soggy but she is 85% there and its definite that she can handle pressure.

Chef Christina approaches Yachecia and tastes the fish as Yachecia admits she didn’t get to taste the final product; the peas aren’t too mushy as she ran out of time. The color of the chips are great but soggy and not uniformed. The fish is the star but the rest fall to the side.

Chef Ramsay asks Jennifer about the fish being too big and the flavor is what is most important. He cuts the fish, learning she used all of the beer in the batter. He says “wow” as he shows that the batter is way too thick. The fish tastes better than it looks and the chips were perfect, and the peas were tasty; but the fish is the hero and its not her best performance.

Chef Aaron is next, saying the chips are dynamite and beyond reproach; the tartar sauce should be in a bottle with her name on it. The fish doesn’t look right and she apologizes.

Christina calls the ladies to the front as the Chefs discuss their dishes. Chef Ramsay says based solely on the dishes they cooked tonight, one of them is leaving and the other still has a chance of becoming the next MasterChef. Yachecia is told she did a good job and is sent back upstairs.

He tells Jennifer she is going way too early in his eyes. She cries, thanking them for the opportunity. Chef Aaron tells Jennifer if she ever needs time to work on her skills, the doors are open in his restaurant in Louisiana. Chef Ramsay asks her to take her apron off and place it on her bench and head home.