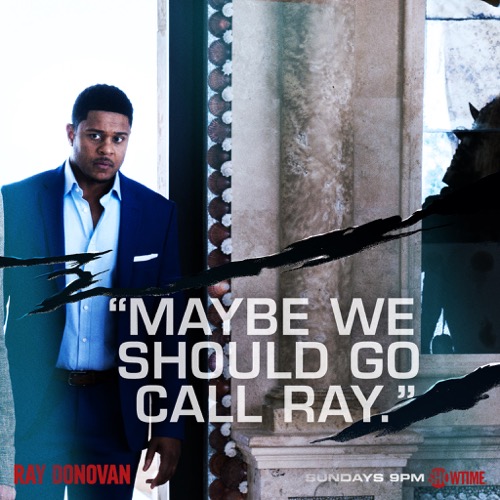 Tonight on Showtime Emmy Award-winning drama Ray Donovan airs with an all-new Sunday, September 17, 2017, episode and we have your Ray Donovan recap down below.  On tonight’s Ray Donovan season 5 episode 6 episode called, “Shelley Duvall,” as per the Showtime synopsis, “Abby makes a shocking decision that reverberates throughout the family.”

Tonight’s Ray Donovan season 5 episode 6 is going to be exciting.  So be sure to bookmark this spot and come back from 9 PM – 10 PM ET for our Ray Donovan recap.  While you wait for our recap make sure to head over and check out all our Ray Donovan news, recap, spoilers & more!

Ray Donovan (Liev Schreiber) arrives at the fire station, parking the car blocking the bay doors. He crosses the street, sits on the bench and begins to reminisce about him and Abby (Paula Malcomson) driving through the desert, he comments that she looks like Marilyn Monroe.

She takes off her scarf and tells him he can’t keep doing this every time they get bad news, when he acts dumb she guesses where he is taking her and he is upset about her ruining the surprise. She insists its going to be fun, but suddenly their car is broken down. Ray hangs up the phone after calling for help and notices his wife is walking away; he calls out to her.

Back in reality, Ray watches as a tow truck takes the car from the front of the firehouse, just like when he was in the desert with Abby. He takes the luggage and heads towards the building Abby went to and sees her sitting by the ice rink; he is shocked to see “ice” in the middle of the desert and asks her if she wants to skate. She says she can’t but he pushes her, joking that she doesn’t remember how. She smiles calling him a bully.

After he uses his keys to unlock the trunk as the tow truck leaves the fire hall; he remembers Abby teasing him about him not being a good hockey player as they put on their skates. On the ice, they hold hands and enjoy their time. Abby watches a girl figure skate and says she used to be able to do that; she gets quiet for a moment as she stumbles and he helps her off the ice.

She takes one of her pills and looks miserable; she is upset that Ray kills people and does all this bad stuff and will probably live to be 100 years old, she hasn’t done anything but raise their kids and look after his damn family and will be dead in her 40s. She shocks Ray by saying she wants to stop treatment because she isn’t getting any better. He tries to console her but she is adamant that he doesn’t know what she’s going through. He has no clue what its like trying to figure out how many hours he has left to live and its just going to get worse before it gets worse. She simply wants to feel good in her body before she dies and is going to stop treatment; he offers to take her skates off so they can go home.

Ray goes to the precinct as Lena (Katherine Moennig) gets out of the trunk of the car at the impound lot. Ray goes to claim his vehicle as Lena breaks in to Vickey’s (Adina Porter) car for the box in the front seat, and crawls back into Ray’s trunk who pays the fees and leaves the lot. Mickey (Jon Voight) goes to see Bunchy (Dash Mihok) in prison, who promises he is taking car4e of things but Bunchy is furious.

Ray arrives at Samantha “Sam Winslow’s (Susan Sarandon) house, where he encounters George Winslow (Keir O’Donnell) who is acting very odd. Ray tells Sam they should discuss his fee, who thought Doug Landry (Michael Gill) had taken care of it. He says Landry took care of the drop but no one told him about Vicky putting a gun to his head. As they share a drink, Sam opens the box where the blood soaked clothes are in. Sam shows the clothing from her daughter who was killed in a drunken accident. Sam wants Ray to work for her from now and she will pay whatever fee he wants. Ray puts down his drink and leaves.

Mickey drops off Bunchy’s daughter at daycare and drives off as Terry (Eddie Marsan) and Damon (Dominique Colombus) arrive at the boxing gym. Bridget (Kerris Dorsey) is thrilled to see her uncle and apologizes for him and Maureen (Tara Buck) ending but promises he will meet the new guy she is seeing.

Mickey waits outside to follow someone. Meanwhile Terry meets Jacob Smitty (Graham Rogers), who appears to know a lot about Terry. Smitty asks if he likes to get high, Terry is shocked he is smoking marijuana in his hospital room; but Smitty says there isn’t much he is afraid of these days. Terry takes a toke, not sure why he did it. Terry reveals he has Parkinson’s and Smitty is impressed with the things they can do medically. Mickey continues his investigation.

Ray stands as Abby reveals to their children, Bridget and Conor (Devon Bagby) that she has decided to stop treatment. Bridget cries with her mother, as Ray goes down to see Conor, who has his music blaring and doing push-ups. Ray turns down the music and tells him to stop. He apologizes to Conor who is calling his mom a “bitch”; he punches his dad in the face but Ray just holds him, promising he will be okay.

Ray gets a call from Landry who says he is coming to her apartment and he expects Natalie James (Lili Simmons) to be alive. Ray returns home to find Natalie watching the news, he says Landry is on his way and she is willing to see him, saying everything is her call.

While wandering through the hospital halls, Smitty runs into another patient who did get the surgery; she didn’t know and says he is going to be fine while she says she is in remission and the surgery worked. Terry finally realizes who he is and walks away; Bridget goes to find Terry who wants to know what they did and he insists he has to tell Ray; she pleads with him not to say anything because her dad has to help Smitty. Mickey goes into a dry-cleaning and sweat shop, where he is knocked out.

Landry asks to speak privately and Natalie refuses. He apologizes and she tells him to leave his wife and he is unreal. She says she isn’t doing his film and she is having the baby; he grabs her and Ray orders him to get his hands off her and if he touches her again, he will break his arm. Landry says Ray has no idea what he is doing and leaves; she feels that was really screwed up and he encourages her to lay down for a bit. She asks him to watch some TV with her and he does.

As he hears the TV, he flashes back to watching Abby with the children. He remembers taking a bottle of whiskey and taking the dog for a walk; recalling how he ran into Natalie that night. Natalie interrupts his train of thought, asking if she can make some pasta. His phone rings and it is Lena who has found Tom (James Keach) and suggests he comes to meet her and finds Tom hanging from the ceiling. His money, clothes and Oscars are gone, Ray tells her to leave him there.

Ray calls Sam, who tells him to come to her office. Bridget and Terry are drinking and singing songs, walking down the street, when they are in front of a church, Terry pauses and goes inside. Bridget sits beside him and he asks her to pray with him; she says she will pass as Terry reveals he killed her. Bridget says he doesn’t know that but Terry insists if Abby had the surgery she would have lived. Terry goes into confessional.

Ray and Sam talk about Tom but Ray says she needs to do something to about Landry. Sam says she is under contract and Natalie needs to finish the picture. Ray says then keep Landry away from the set. He says Natalie is just a kid. Sam says consider it done, Natalie won’t see Landry anymore. She thanks him for coming and dismisses him but he notices that she has all of Tom’s Oscars back; she knows that he knows but doesn’t acknowledge it.

Mickey wakes up in the trunk, and there is shoot out between the DEA and his captor, he is almost shot as the men attempt to escape; one steals the car and drives off with Mickey in the trunk.

Natalie asks Ray about his problems when he gets home and asks him to sit and watch the stupid movie with her. He goes back to the night he ran into her walking the dog and the night they had sex. When he got back, Bridget asked if he was okay and he said he just took a walk and will see her in the morning. Natalie asks Ray if she is making problems for him, he sits down telling her she needs to go back to work today, telling her of the conversation he had with Sam. She reminds him that she always wins and walks off to bed.

Bunchy is sitting in his cell, while the daycare attempts to get a hold of Mickey. Bridget walks out of the church as Bunchy sees Dime Bag (Ryan Dorsey) being escorted into the prison. The rope holding up Tom, breaks as Sam takes a drink and smirks.