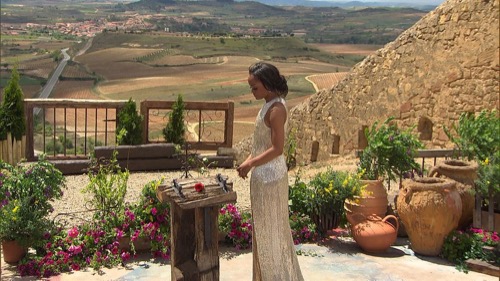 We will be live blogging tonight’s episode of The Bachelorette 2017 and you just know there is going to be tons of drama, cat fights, and tears. So come back tonight between 10 PM – 11 PM for our live The Bachelorette recap. While you wait for our recap make sure to check out all our The The Bachelorette photos, spoilers, news & more, right here!

Tonight’s The Bachelorette After The Final Rose recap begins now – Refresh Page often to get the most current updates!

Chris welcomes everyone back after the emotional “break up” with Peter; they didn’t really say goodbye but they did part ways that night. She is lost for words but greets him with a hug.

He knew this was going to be a hard experience but had no idea. He is shaking like a leaf right now, admitting its hard. Rachel says its hard to watch and to be in that moment but frustrating and confused because she didn’t understand how he could come that far after he promised in Geneva if he didn’t think he could take those steps he would leave. Peter insists he wanted that future but there was just one huge thing that needed to happen first.

Peter said it was very hard to watch her walk away. He was incredibly emotional because he knew she was the one he wanted to spend the rest of his life with, she had all the qualities he wanted int a spouse but couldn’t get to the place she wanted him to be in. He felt there was something wrong with him and how could he have done things differently.

Rachel says watching it back made it seem like the focal point was him not willing to propose but she says there were much deeper issues that she started to see already in Geneva, that he wasn’t in the same space she was when it came to a relationship. He reminded her of everything she had been through in her previous relationship.

Peter doesn’t think there is anything wrong with him, he is just lost for words. He says he couldn’t get out of his own head and that would be the only thing he would have changed. Rachel doesn’t think the show is for him, that he was true to himself and hopes he truly finds everything he wants. He apologizes for saying she will be living a mediocre life and she says she is living her BEST life!

Rachel says she isn’t angry with Peter, she is very frustrated; Peter is too. They both say it was a very hard night and process; he cares about her deeply to this day and right now he feels like he is being attacked. He didn’t want to hurt her or waste her time. She says she isn’t attacking him, as its a strong word and wants to know why he feels that way. He says of course there are still feelings and he can’t answer her right now.

Peter admits he doesn’t wish to change anything from that night. She appreciates he was true to himself and that’s a great characteristic. The emotion is clearly still with Peter and Chris asks if there was ever a real breakup and Peter said he definitely felt that was the end; he attempted to reach out to her again but the answer was no. She felt like he didn’t know what he wanted and when she started this journey she wanted someone who knew what they wanted.

Peter is given the opportunity to speak for the last time to Rachel, he thanks her for giving him a chance and the opportunity to give him feelings he didn’t know were possible. Although things didn’t end the way he hoped, he wishes her for the best and wants her to only have happiness. He chokes up and admits he still has feelings for Rachel and has a special place in his heart for her.

Chris asks Rachel how she is doing and she says she is okay and believes in closure and she just had that. He asks if she is ready to share how this ends with Bachelor Nation. Chris sends us off to see how Rachel’s love story ends.

Rachel doesn’t regret the decision she made and some of the questions he asked her made her understand where he was coming from; making her wonder if she was rushing into this with Bryan. She wasn’t questioning Bryan or their relationship, just whether she was rushing herself. Bryan picks the ring as Rachel wonders if it is too much of a turn around from last night into today and doesn’t know if she is ready for this.

Bryan arrives at the destination, every emotion running through his body today. He is 99.9% confident but there is that .1% chance. He is nervous and goes to meet Rachel at the top of the castle. Bryan has been ready for this his entire life and she can take that leap with him, all she has to say is yes! He brings it full circle with saying the same thing in Spanish he said the first night.

Bryan tells Rachel when he first stepped out of the limo, he knew he was in for the ride of his life. When they first kissed it was like a chemistry bomb exploded and he just knew from that first night with certainty in his heart they could be something special. She is everything he could ever want in a woman, a wife and the mother of his children. He is completely head over heels, totally and absolutely in love with her and hopes she feels the same.

Rachel says her heart has never been more confused than she has been this week. She has always gambled on feelings in complicated relationships and its the damaged connections that have always offered her the chance to run away and when she met him it just seemed too perfect and she was trying to find cracks in the perfect foundation. She had to do deep soul searching to find the courage to challenge herself. This love has been so mature and has tested her in ways she couldn’t imagine and she always said she would know the person she was meant to be with would be someone she couldn’t imagine her life without. Right here in this moment with him she sees her forever and future. She tells him she loves him and is in love with him and couldn’t imagine her life without him.

Bryan says he is the best version of himself when he is with her, she is so easy and effortless to love and he just wants to love her for the rest of his life. He bends down on one-knee and she jumps and shrieks. He proposed and she quickly accepts; he places the ring on her finger and kisses her hand. He cups her face and tells her she has no idea how long he wanted to hear those words.

She stops him and says she gave him her first rose and is giving him her very last rose, they exchange “I love yous” as the church bells ring and they shout from the hilltop they are engaged; he wraps her in his arms and begins to carry her away. Chris congratulates Rachel and says Bryan is backstage as the audience cheers them on.

Bryan walks in and immediately kisses Rachel and then greets Chris, who says he didn’t mean to get in the way. They are excited to finally be out in the open as Rachel says it feels surreal. Bryan takes the ring out of his pocket and proposes to Rachel again, asking her if she will remarry him – she says yes!

It feels fantastic and good to have him by her side. He says its tough that they are apart and only see each other on weekends. Bryan admits on the morning he planned to propose, he didn’t know that Peter was gone but he just had blind faith going into it and what was meant to be would happen.

Chris jokes that Bryan and Rachel won’t stop kissing. He says they have forever to do that. Bryan says the future is just bringing their lives together, as they are trying to figure out where they will live. They have talked about wedding, she wants a winter wedding, so Bryan says she will get what she wants.

Bryan’s mother told Rachel she is so happy she has joined their family and she loves her, getting along great. Rachel says she will pull out her Spanish dictionary to talk to his family. Bryan says Rachel has the best combination in a woman he’s ever experienced – the sass, the charm and the attorney in her, which turns him on, keeping him on his toes but she also has a sweet sensitive side.

They are excited to stop hiding, and Bryan wants to show her off; they want to go to the movies or walk Copper, her dog. Rachel’s family is skeptical and now that they have gotten to know Bryan, the understand her and her decisions. Rachel says she knew when she was defending him to her family, she said he was her best friend and he was really the best man for her.

Chris says they are a beautiful couple and are in this week’s People Magazine, where they made the cover. He also reveals their friends in Rioja, Spain are giving them an all expenses paid trip back to the wine country where they go engaged. He offers his congratulations to them again. Rachel and Bryan don’t want to join the series, preferring to go back to Rioja.