The Bold and the Beautiful Spoilers for Next 2 Weeks: Pregnant Steffy Paternity Mystery – Rick Joins Thorne To Take Down Ridge

BY Heather Hughes on December 10, 2017 | Comments: one comment
Related : Soap Opera, Spoiler, Television, The Bold and the Beautiful 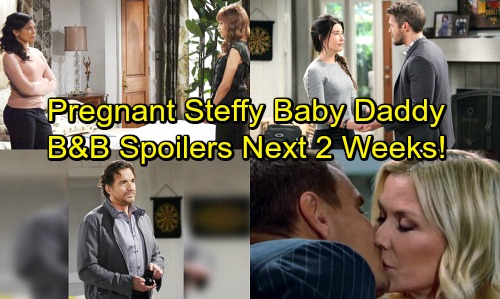 The Bold and the Beautiful (B&B) spoilers for the next two weeks tease that we’ll see major confrontations and growing fears. The week of December 11-15 will bring a heartfelt confession. Thorne (Ingo Rademacher) will pour his heart out to Brooke (Katherine Kelly Lang) and beg her not to marry Ridge (Thorsten Kaye).

After Thorne locks lips with Brooke, she’ll probably let him down gently. Brooke will always love Thorne, but Ridge is the one she wants to build a life with. Meanwhile, Ridge will try to get his future all lined up. He plans to ask for Brooke’s hand in marriage, but he’ll need a ring first.

Once Quinn (Rena Sofer) designs something marvelous for him, Ridge will show it to Steffy (Jacqueline MacInnes Wood). He’ll ask for Steffy’s blessing, but it’s not clear why. We all know Ridge will just do what he wants anyway!

Besides, Steffy’s too wrapped up in her own drama to care. She’ll learn she’s pregnant this week on this week’s new episodes so the paternity mystery’s officially kicking off. Later, B&B spoilers say Liam and Steffy will enjoy a hot sex session. They’ll try to move past their recent problems, but Steffy’s worries are only going to get worse in the coming weeks.

Later, Brooke will be thrilled over Ridge’s romantic proposal. She’ll accept and he’ll slip her new engagement ring on her finger. They’ll begin planning their wedding, but Thorne has no intention of giving up.

Other Bold and the Beautiful spoilers state that Quinn and Thorne will face off. He’ll lash out at her for betraying Eric (John McCook), but Quinn will fire back. She won’t want Thorne to stir up all this trouble again. 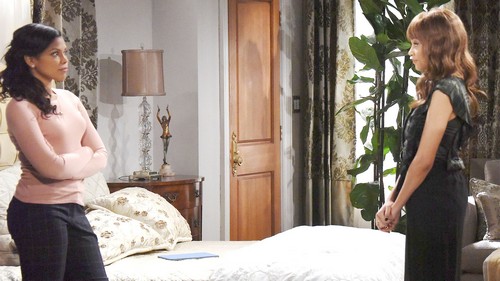 The week of December 18-22 will deliver some serious tension. The Bold and the Beautiful spoilers say Ridge will brag about his engagement in front of Bill. It’ll take all of Bill’s self-control to keep his mouth shut about Steffy. Ridge certainly wouldn’t be happy if he knew his daughter cheated with a fierce enemy.

Elsewhere, Thorne will turn to Rick (Jacob Young) for help. He’ll think they’ve both been the forgotten Forresters for far too long. Thorne will try to get Rick on his side for the battle ahead. He intends to knock Ridge off the throne, but he’ll need some assistance to make it happen.

Will Rick decide to pitch in with Thorne’s scheme? Can Ridge handle the wrath of his brothers? We’ll give you updates as other B&B news comes in. Stay tuned to the CBS soap and don’t forget to check CDL often for the latest Bold and the Beautiful spoilers, updates and news.