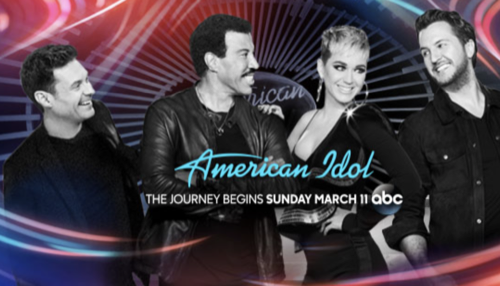 It’s another exciting night of American Idol on ABC tonight with an all-new Sunday, March 11, season 16 episode 1 premiere called “Auditions” and we have your weekly American Idol recap below. On tonight’s American Idol season 16 premiere as per the ABC synopsis, “The gold standard of all music competition series, “American Idol,” will make its highly anticipated return to television as superstar judges Luke Bryan, Katy Perry and Lionel Richie set out on a journey across the nation to discover a new crop of inspiring talent with a touch of Disney magic, as it premieres its first season at its new home on America’s network.”

Time for an all new American Idol with our three new judges; Katy Perry, Lionel Richie and Luke Bryant joining our beloved regular host, Ryan Seacrest. The first contestant up tonight is Catie Turner who admits she annoys a lot of people. She is singing, “21st Century Machine” that she wrote.

Katie: “That is a fantastic song, I love where your mind is at.” Luke: “You are interesting and brilliant beyond your years.” Lionel: “I love the sound of your voice, I cannot tell you how wonderful it is to see you, I am fascinated with your brain, your writing is crazy.” They take a vote, all three say yes.

The next contestant is Ron Bultongez, he was born in the Congo in Africa who is here following his American dream. Ron is singing, “Let It Go,” by James Bay.

Luke: “I am so exited right now, something about you is pretty big and inspiring. Your back half was much better than your front half, but i love your honesty.” Katie: “I think that I don’t know who you are yet, I know about your story and it is beautiful and inspiring. I don’t know who you are at all.” Lionel: “I know what is coming in terms of your commitment to the business, I’m thinking is it too soon or is it right the time.”

Luke is a yes, he thinks he needs work and is willing to give him a chance. Katie is a no, she thinks he can imitate but thinks he can’t find his thing yet and doesn’t want to put him out there before he is ready. Lionel says no, he wants him to come back with his identity. Ron is called back in, Lionel couldn’t get him off his mind and has changed his vote to a yes, Ron is going to LA!

Maddie Poppe is next, she is 19 years old from Clarksville, IA and a college student. Lionel: “You have that storyteller voice, it’s the best thing, we need you on this show.” Katie: “You definitely have your own distinctive quality in your voice, that is pretty dope.” Luke: “I’m not critiquing you, I’m just saying yes.” Lionel and Katie also say yes.

Koby is from Denver, Co and she is a musical theatrical actress and went to school for opera. She is singing and original song called, “Never Stops.” Katie: “What do people usually say when they hear you sing?” Koby says they ask her why she never auditioned for American Idol. Katie:“I think they were not telling you the truth, this is not how we listen to music.”

Koby starts to argue with Katie that she is not leaving without a golden ticket. Katie says it is a no for her. Lionel: “Truthfully, we are in the music business, this is country, pop, R&B standing here in front of you and that voice is not going to work for records. We are looking for an idol for popular music, this is unique music, the answer is no.” Luke: “I think you know you are quirky and crazy, but you are doing you a dis-service, so I would vote a no.”

The audition tour heads south to Nashville and Harper Grace is the first contestant. When Harper was 11 years she sang the national anthem in front of 22,000 people and the media said it was the worst rendition ever. She is singing an original song that she wrote, “Heartbreak Yard Sale.”

Katie: “That’s a really well written song, the chorus is really well written, a lot of real details.” Luke asks her to sing another song, she chooses, “Young, dumb and broke.” Luke: “You have a great voice.” Lionel: “I love the quality of your voice, I don’t even think you know you have the kind of voice that you do.” Katie: “I don’t think your voice has reached its ultimate potential yet. I think you are like a dream for Hollywood to carve out.” Katie asks to see Harper’s dream board that she brought in and writes on it, she gets three yes votes.

Layla Spring is from Kentucky and has an amazing bond with her little sister, Dyxie. Layla brings Dyxie with her to greet the judges and she wants to sing a duet with her first. The judges love Dyxie and give her a golden ticket, Katie writes on it 2026.

Time for Layla to sing on her own, she sings “Who is loving you,” by the Jackson Five. Katie: “Someone like you who is eager and got something, you could use all the experience and benefit from going to Hollywood.” Lionel: “16 years old, this is a mental game, I don’t want to give you the opportunity to go to Hollywood and it destroys you.” Time to vote, Lionel is a yes, Katie is a yes, Luke is a yes as well.

Benjamin Glaze is 19, he is cashier at an electronics store. Luke asks him if he ever kissed a girl and liked it and he says no. Katie gets up and he goes to kiss her on the cheek, she turns and kisses him on the lips.

Benjamin needs water, Lionel gets up and hugs him. Luke: “I think you need to hone your craft a little more, get a little better at singing, so I’m a no.” Katie: “I really enjoyed meeting you, you gave my heart a flutter, you are very sweet and I don’t think it is fair to put you through because there are so many better singers.” Lionel: “You need to practice, come back and kiss a couple more girls and do it for us again, I’m a no.”

Nico Bones is up next singing, “Worms.” Katie: “I think you are dope, but it’s a no.” Lionel: “I was so happy you stopped that song when you did.” Luke: “want to hang out, chug a lot of beer and make some bad decisions – for American Idol, it’s a no.”

Noah Davis is 18, a nursing student, from Arkansas, he grew upon a farm, but feels like he is a city person. If he wins, he is buying an alpaca. Noah is playing piano and singing, “Stay” by Rihanna. Luke and Lionel get up and hug Noah. Then Katie gets up and hugs him too, Luke hands him his golden ticket.

Alyssa Raghu, 15 and a high school student from Orlando, she is singing, “Almost is never enough.” Katie: “Your voice is still going to grow, I am a believer in you.” Luke: “You are so easy on the ears.” Lionel: “At 15 years old this is not supposed to be happening.” Three yes votes, Alyssa is going to Hollywood.

Sardor Milano, a supermarket employee, is 26 years old from Orlando. He claims to be very popular for his singing in Russia. We sadly don’t get to see what the judges say, but it is a no from all three judges.

Zach D’Onofrio brings socks for al the judges as he has a sock fetish. Zach has been singing for one year and tonight he is singing, “The way you look tonight.” Katie gets up and dances with Zach, Lionel and Luke dance together. The judges love him, Luke says that he has Sinatra down. Lionel says he killed it, Katie is thrilled – he is going to Hollywood.